A tribute to firefighter families. 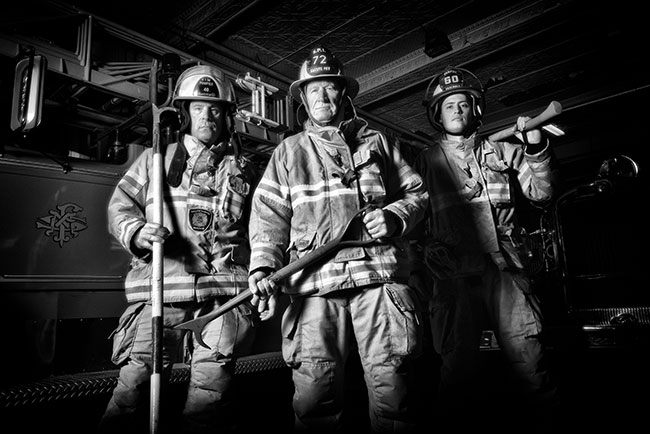 In family businesses, there are often negotiations around offspring and their candidacy — obligation, opposition or anticipation — to one day take the helm. As a firefighter, no such financial succession exists in the service, but many children have opted to take the path of a senior family member in the fire service anyway. This is evidenced anecdotally; though it was difficult to come up with statistics on the matter many of you will know of, work with, have read about or are part of a generational fire fighting family. This legacy of brotherhoods and sisterhoods, familial-hoods in kin and culture caught the attention of a firefighter photographer from small-town Ontario, and turned into a passionate adventure to form a book.

That photographer is Mitchell Brown. He was born in Hamilton, Ont., in 1967, and grew up in nearby Grimsby where he still resides. At age 16 his brother gave him a camera and he shot his first roll of film.

“I was hooked from that point on so I’ve been shooting now for 37 years,” he says. And yes, he did give up on film when digital cameras arrived, fully embracing the potential of the technology and direction of the art form.

His joy behind the lens turned professional when he went to a local newspaper in his formative career years and said he wanted to take pictures. The editor gave him a chance and an assignment for that weekend, which turned into a job. He stayed on for a short while before deciding to go it alone as a freelancer, working for newspapers in Toronto, Hamilton and Niagara area. He discovered a passion for wildlife, nature and abstracts, describing taking pictures as being very therapeutic for the mind and soul. Brown lives with chronic depression and anxiety.

The entrepreneurial photographer’s life eventually found him witness to a horrible tragedy — a fire involving multiple fatalities. The emotional toll it took on the firefighters moved him.

“It takes a special person to be able to do what they do,” he says. “I’m truly grateful to be granted access to the tight knitted inner circle of the brotherhood and sisterhood. To be given the trust to capture moments in times of heightened chaotic situations, many being very emotionally charged; to be able to document the courage it takes and to photograph the physical and emotional strain involved is what keeps me fueled.”

Brown expanded the scope of his photography business to include Smoke is Showing Fireground Photography, which is dedicated to capturing the experience of firefighters. He fostered trust with his local area fire departments, and carries a pager because he’s on the volunteer rehab unit with Lincoln Fire Rescue. He has been active in that unit for three years, turning up at structure fires with his camera while also providing services like drinks and misting fans to help the crew as they battle the blaze.

Over the years he has built up an impressive gallery of the firefighters in action, equipment and life around the fire hall. The gallery is browsable at smokeisshowing.ca. His business in photography for fire offers shoots for training, live scene, apparatus, traditional firefighter portraits and collages. He also makes custom helmet and turnout gear images.

His photographic pursuit of the fire service dovetailed into a niche book project called Celebrating Generations, which captures firefighters in the same family. He has photographed about 50 families of generational firefighters so far, but says the “most meaningful image I have taken for my Celebrating Generations project is an image I haven’t yet taken. An image I will never have a chance to capture. An image I can only reproduce in my mind.”

This is the image that cannot be. When he first thought of Celebrating Generations, he discussed it with his friend and then West Lincoln fire department Deputy Chief Kevin McIntyre. The plan was to kick the project off with McIntyre and his son Steven. Tragically, this plan was never to come to fruition. McIntyre passed away several months later in April of 2018.

“Instead of a would-be father son picture, I was tasked with documenting his funeral, the hardest thing to date I’ve experienced in the fire service.”

The project forged on and now that it’s in full swing, Brown has photographed families all over Ontario and also Montreal.

“The more fathers and sons or fathers and daughters I photograph, the more come out of the woodwork,” he says. “It has taken off. They love the idea. There’s a special history to the fire service and what I want to do is capture the past and a glimpse into the future, passing the axe down from generation to generation.”

He says he was surprised by how many firefighters are part of a generational clan. He has photographed about 50 families so far. One shoot involved a father who was a firefighter and three of his children who also were. He is also finding a mix of volunteer and career crew.

While the COVID-19 pandemic initially shuttered progress on the book, Brown is now back to looking for more participants and returning to regular fire service shoots. In late summer he provided photographic services for the Parry Sound Fire Department in Ontario and he will be on hand to capture Lincoln Fire Rescue’s 50th anniversary plans.

In a testimonial, Dave Thompson, fire chief for Parry Sound, said: “He interacts with the firefighters in a manner that is greatly appreciated and his work clearly honours the dedication and responsibilities that it takes to be a firefighter.”

At Lincoln Fire Rescue, Fire Chief Greg Hudson provided this testimonial: “Not only is Mitchell’s fireground photography amazing, but he treats each scene with dignity and respect.”

Brown is open-minded about where the Celebrating Generations project will take him or end. It is free to participate in and Brown provides a print from the shoot to families. His plan is to complete the book and donate part of the proceeds to a fire service non-profit.

Though firefighters became a focus of his work, you can see a variety and the extent of his talents at mitchellbrown.ca, where he showcases his scenes from nature. Brown has been accepted into numerous juried shows and has received a best local artist award through these.

An excerpt from his website’s artist statement shows what makes his stunning photography unique:

I search out details that are often overlooked as we go about our busy lives. I look for the unusual. Nature’s art is all around us: I don’t create it; it’s already there. I just try to capture it, to preserve my vision for others to see, in hopes that the images I produce might just be someone else’s means of escape, their own therapy.

In capturing the firefighters at work and in legacy, he is preserving and enriching a history and a future of pride and timeless tradition. If you are interested in being part of the Celebrating Generations collection, you can contact him at 905-929-3686 or contactmitchell@hotmail.com.