Records are made to be broken. 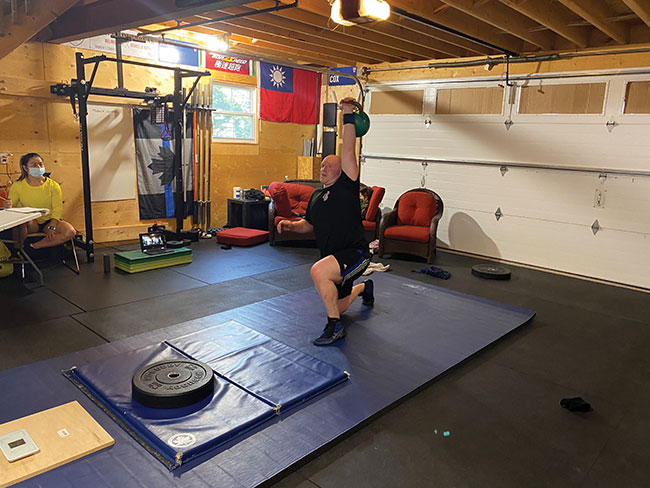 Chris Cox during the first repetition to start the hour. One down, 201 to go!. Photo credit: Warren Ziegler

Wrestler. Police Officer. Firefighter. Chris Cox has accomplished many things in his life. Now he can add something new to his resume.

The 42-year-old is now a Guinness World Record holder.

Cox has always enjoyed a challenge. It’s one of the things he loves about his job as a firefighter with Mississauga Fire and Emergency Services and why he volunteers with Centre Wellington Fire in Elora, Ont. But setting the world record for most Turkish get-ups in one hour is miles above the physical challenges he faces daily. And it makes his success all the sweeter.

Cox was born and raised in Saskatoon, attending the University of Regina. Initially, he chose to follow a career as a police officer. After moving to Ontario and while still working in law enforcement, he volunteered as a firefighter in Elora. Cox enjoyed being a firefighter and began to consider a career change. Two years ago, having completed all the necessary courses and certifications, he became a full-time firefighter in Mississauga.

Training has always been a part of his life. As a younger man, Cox was Canada’s national wrestling champion and competed internationally at three World Championships. As a police officer and now firefighter, he remains passionate about fitness and continues to work out several times a week.

“Training is obviously essential for my job, which can be physically demanding,” he explains. “More than that, it also serves as a form of stress relief. This has been particularly important during pandemic. The stress is through the roof when answering a call because you have no idea who might have covid.”

Cox has always found motivation in a physical challenge, but it’s a leap from enjoying pushing one’s limits to attempting a Guinness World Record. How did it come about?

It began thanks to the pandemic and the monotony of daily life in lockdowns and restrictions. Cox and his schoolteacher wife, Belinda, trained together as a way of staying in shape and relieving boredom. Belinda excels at burpees – a full-body calisthenic exercise consisting of squat thrusts with stands in between – and Cox urged her to try to break the women’s world record for most chest-to-ground burpees in a minute. She accepted the challenge and succeeded, completing 775 in an hour.

Cox was justifiably proud of his wife. What’s more, he was inspired.

Making the pronouncement was easy. Finding a record that he felt was achievable was a bit of a challenge. It took some time to settle upon the Turkish get-up. Cox explains how it came about: “I was doing some shifts as a supply teacher at a fitness centre, during which time I was asked to teach students the exercise. It was a movement I always liked and was good at. I discovered there was a record, it seemed like a realistic goal, and I decided to try to break it.”

The Turkish get-up is a complex, total-body exercise that increases core stabilization and overall strength. It starts with the participant lying flat on their back. They then raise a kettlebell using one arm directly above them and then press up using the opposite arm swinging one leg under and standing up all while the weight stays above their head. They must return to the original position by reversing the order of movements to complete a single rep. The exercise requires upper body strength to maintain a weight overhead, shoulder stability, hip, and glute strength to raise your body off the floor, and tremendous core strength.

Cox realized he would need a strategy if he were to succeed in his attempt. “In training, I tried three or four strategies, but all failed horribly,” he explains. “Eventually, I decided to use the same strategy that my wife employed in her record-setting effort. Basically, this entailed breaking the effort down into one-minute intervals. I would do four reps the first minute, three the next, then alternate back and forth. This method gave me a brief break to ensure my heart rate didn’t spike and served as a series of achievable physical and mental goals.”

On May 16, Cox made the attempt at the world record. As per Guinness guidelines, Cox had two video cameras running and a pair of independent witnesses who would fill out a sworn statement confirming authenticity.

Cox had trained heavily but had never gone past the 40-minute mark in simulated attempts. He found the final 20 minutes a physical and mental grind. Cox believes the discipline required of being a firefighter helped. “The typical day at a firehall can be a lot of boredom waiting for a call, then going from zero to 60 when a call comes in and lives are a stake,” he says, recalling a desperate rescue of a man in a flooded creek that took place just a week before our interview. “You need to have mental strength and discipline to be able to turn it on like that and face the tense, emotional situations we find ourselves in.”

Whatever the reason, be it physical training or mental toughness, the attempt was a success. Cox completed 202 repetitions with a 24.kg/53lbs kettlebell to set the Guinness World Record for Heaviest Weight Lifted by a Turkish Get-Up in One Hour. He shattered the previous record by 20 repetitions and 500kg/1100lbs. Guinness takes several months to confirm the record, so it wasn’t until June 14 that Cox could truly celebrate his achievement.

A humble man, Cox is a bit embarrassed by the attention he’s received since. He’s also kept grounded by the crews at his firehall. “There’s a lot of good-natured ribbing at a firehall, so they’ve had some fun with me – ‘Hey, we have a world-record holder in the house – let him carry the heavy stuff’- that sort of thing,” he laughs.

Cox is proud of his accomplishment as a world record holder – though in a modest, understated way. But what he’s most proudest of is being able to tell his two children that any goal is achievable with hard work.

So, what’s next for a man who seems always in search of a new way to test himself? An attempt at another record perhaps?

Cox laughs. He says he’s accomplished his goal. He’s already written himself into the record books. His focus remains firmly on being great firefighter and on serving his community. The world record, he explains, was just a covid-inspired challenge.