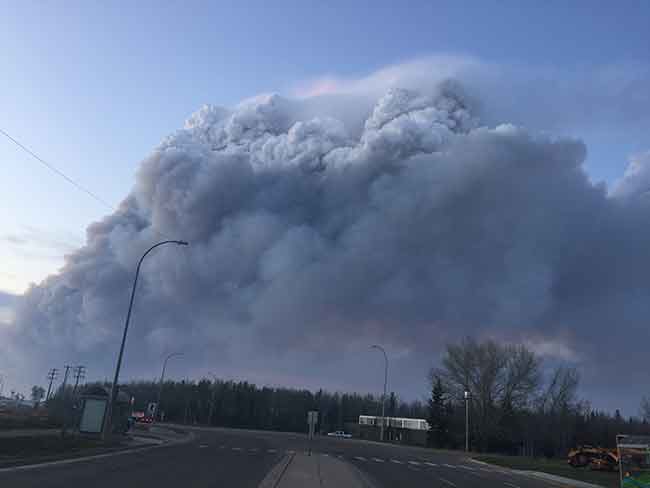 I attended meetings and conference calls co-ordinated among the Provincial Operations Centre (POC) the M-9 Group (nine of the largest city fire departments in Alberta) and GPREP, during which it was determined that there was a need for personnel. In further meetings with representatives from the GPREP group, both the county and City of Grande Prairie decided to send one person each to be deployed as part of the IMT. Platoon Chief Bart Johnson and I were asked to deploy to the incident. This deployment was confirmed at approximately 12:00 on May 4. We prepared and were on the road at 18:00.

A stipulation of this deployment – co-ordinated through the M-9 group – was that we would meet up with Canada Task Force 2 (Can-TF2) and caravan into Fort Mac. Contact information was exchanged and we were on the road to meet with Can-TF2 in Athabasca. At 01:30 and with additional communication, we met with personnel from Can-TF2 in Grasslands, where we worked to co-ordinate a place to rest and rehab until our actual deployment into Fort Mac. Approximately one hour later we were provided with a local elementary school gym in which to rest. At 03:30 we caught some sleep until we mustered again at 06:30.

Just before 08:00 we travelled the remaining distance to Fort Mac with Can-TF2. Driving conditions approaching the city were poor; active fires were burning along the route and at times visibility was minimal. As we got closer we observed natural gas risers actively on fire and areas completely consumed. We also noted many abandoned vehicles along the route.

Our entry into Fort Mac was somewhat surreal. Along the highway we encountered RCMP road blocks with an inordinate volume of press, and as we passed we became the fodder for pictures and film.

Somewhere around 11:00 we arrived in Fort Mac at Fire Hall 5. At the hall we participated in a briefing by Can-TF2 during which its members co-ordinated their initial priorities and assignments. We, as part of the IMT, were sent into the hall where the regional emergency operations centre (REOC) was established. We were informed that, based on current conditions, evacuation of this site may occur with short notice.

Observed conditions in the surrounding area were not good. Active fires were burning near our site, both to the west and south. Smoke conditions on arrival were manageable and visibility was fair, but this deteriorated dramatically at night.

We were ushered into the REOC where we signed in and participated in a situation report (sit rep) update. The fire at that time was described as out of control, with many areas of the city still threatened. Although damage was understood, no actual damage assessment had been done at that time due to defensive fire conditions and accessibility issues. The weather forecast was not promising. The overall feeling in the REOC was optimistic but remained realistic. Fort McMurray Fire Chief Darby Allen said a few positive words to conclude the sit rep and provided his priorities for the day.

After the sit rep we were introduced and asked to provide our bios and areas of expertise. Johnson and I said we were comfortable in any role and would facilitate any needs as assigned. We were mustered into a hallway with members of Can-TF2 and waited for assignment. A couple of hours later we were assigned to the planning section and designated shifts; I was given nights. Shifts were 12 hours long, starting at 08:00. I was told to catch a few hours sleep, which I attempted to do in our vehicle. I reported for duty at 19:00 for the briefing and assignments. I was introduced to our planning chief, Calgary Police Supt. Ray Robitaille. After more introductions I was assigned as demobilization unit lead. The unit’s initial objectives were to determine the needs of the REOC manager and operations section for the operational cycle and work to complete the tasks from day shift.

For the next days of deployment, my planning section focused on short-term and long-term planning that encompassed everything from evacuation plans for the 25,000 people north of Fort Mac to Alberta Premier Rachel Notley’s visit. We also worked to co-ordinate a damage assessment to get an idea of what was actually lost. Early on we focused on a phased re-entry plan that included restoration of critical infrastructure and getting both businesses and residents back into the city. Planning stayed dynamic and we worked with the REOC manager to stay in front of the incident, amending or modifying plans as required.

On a personal note, Robitaille was extremely professional and well versed in his role and it was my pleasure to work with him and all the planning personnel on my shift.

Working conditions were not the best for the first several days of operations. The REOC was without primary power and potable and non-potable water. Smoke conditions, especially during the evening, were very poor and most personnel were forced to wear air-purifying respirators while on shift. Without power, heating, ventilation and air-conditioning systems were non-operational and our ability to control the environment did not exist. Our operations were run using generated power and portable facilities until Day 4 of my deployment.

The task force was able to provide basic requirements to our responders in the form of housing, food, potable water and other basic needs in short order. My hot shower on Day 3 was a welcome relief.

County of Grande Prairie Deputy Chief Dan Verdun worked in planning in the REOC in Fort McMurray alongside local authorities and members of CAN-TF2.

I had the opportunity to drive around the city during my down time; the speed and urgency of the evacuation was apparent in many obvious indicators. I saw abandoned vehicles, businesses not having had the chance to put away exterior displays, and animals (pets) still in their homes. To see a city of this size without anyone in it other than emergency responders is something I will remember for some time. I was deployed for a tour in Slave Lake, Alta., after the wildfires in 2011, and although there were many similarities in damage and impacts to residents, the sheer scale of Fort McMurray makes this disaster different. Imagine an event that causes more than 80,000 residents and workers to evacuate.

Based on my opinion and observations from my tour I have this to say: I think, for an incident of this scale, it went and continues to go remarkably well. A lot of well-meaning responders did and are doing a lot of work to ensure the safety of the general public and other responders and to minimize the level of potential damage.

I would encourage any municipality to have protocols in place to ensure personnel accountability for safety of responders in a structured manner at the beginning of the incident. I would suggest the incident command system be completely adopted and not modified to suit the needs or perceived needs of the incident. I would finally suggest that internal communications between the REOC and the Provincial Emergency Operations Centre (PEOC) be strengthened and structured to ensure that all sections and site command are on the same page and all needs of the site (boots on the ground) are addressed first and foremost. The entire purpose of the PEOC/REOC initially is to support the responders.

These are my personal observations about areas of growth. The responders with whom I worked and interacted were all exceptional people with no hidden agendas. They, like me, were there to make a positive difference and help a community in need. Some of the people with whom I had the pleasure of working were from Fort McMurray and in some cases, had lost everything, yet they found the resolve to help their community and fellow residents; this to me was very humbling to witness. I do not attempt to detract from the amazing job done in a hectic time by any and all personnel, but, as with any incident, lessons learned will only make us stronger.

As Alberta continues to experience incidents of this scale occur with more regularity we need to ensure continued communications and co-ordination between government groups (incident management teams, both provincial and municipal) to provide professional response. This communication needs to occur previous to these incidents and not when the request to respond occurs. Further, continued training in emergency management for any agency wanting to respond to such incidents is paramount. These are my opinions, but I feel that they will allow us to better respond for the next incident when it occurs.

Dan Verdun is the deputy fire chief of rural operations and training for the County of Grande Prairie Regional Fire Service in Alberta. Verdun began his fire career in 1995 with Union Bay Fire Rescue on Vancouver Island. Employed by Grande Prairie in 2010, Verdun has specialized training in emergency management, fire-service instruction, fire officer and fire prevention programs. He is a fire safety codes officer.