The Dawson City fire department, led by Fire Chief Jim Regimbal, is a great example of how an all-volunteer department can work well, be efficient and do its best to keep its community members safe. 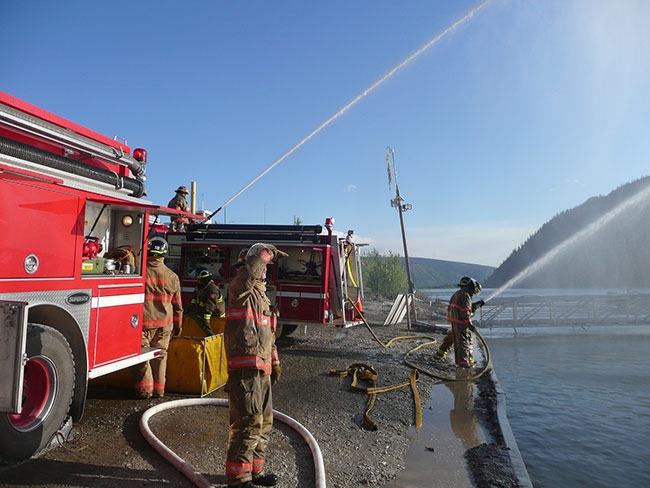 It’s nice and sunny in the photo but the City of Dawson Fire Department sees -40 C for weeks at a time serving from the Yukon. The Dawson City fire department

“Most of my career was in the military. I also owned a small coffee shop for a few years elsewhere and then worked in Saskatoon and also Kelowna, B.C.,” said Regimbal. “A chief position opened up here in Dawson City. The timing was right for me back then so I came here to do one full year and see what it was like. I fell in love with the community and the people and I’ve been here ever since.”

The City of Dawson, commonly known as Dawson City or Dawson, is widely connected to the Klondike gold Rush and had a population of 1,375 in the 2016 census. The fire department has room for 32 firefighters and currently has one deputy chief, five senior captains and all members are firefighters totalling around 28. Regimbal is the only full-time staff at the department.

“I’m the only full-time team member here right now but we could definitely use one more full-time staff member,” said Regimbal. “It’s a small department but when you consider everything that needs to be done on a day-to-day basis — things like staying on top of NFPA standards and training — an extra body would make a huge difference.”

The department definitely is busy considering the population, but that’s because Regimbal and his team of firefighters also serve neighbouring municipalities, such as the Klondike Valley Fire Department.

Volunteering in Dawson
In many departments, the team of volunteers will receive payment for mandatory training and answering calls. In Dawson, technically, the volunteers also receive pay, but none of them take any of that money home with them.

“No one takes money home with them here at our department,” said Regimbal. “The members get paid for training and callouts, but they take all that money and put it right back into the association.”

The community has a firefighter museum and some of the money going back into the association helps with the costs of keeping up the museum, as well as other ways the department can invest into the community such as, vehicle restoration projects and helping out department members.

“About three years ago we sent an 1898/1899 horsedrawn steam engine to Ontario to be restored. We got it back last year and the whole project cost around $250,000. The members had been saving their remuneration pay for probably 30 years for it and what was really encouraging to see was that young and old, anybody and everybody a part of the team at the time, was ecstatic to see the money going towards that project.”

Regimbal said that having the money go back into the association can also be used to help out department members when needs arise.

“We help out members when they’re down and out,” he said. “Whether they’re out of work for a time or they’ve gone through some hardships at home, our executive will go and help them out financially, and emotionally if needed, and we don’t expect the money back. That’s for them for what they do and the team is encouraged by the good they see from that.”

Regimbal said he has never had anyone tell them they aren’t joining the team because they won’t be getting paid.

Keeping busy
Regimbal said that the department responds to all the common types of calls any department would respond to; house fires, vehicle accidents, chimney fires and so on but every now and then something unique will come their way.

“The other day we had an outhouse fire and a few years ago we had a cave fire. There’s a gentleman across the Yukon River who lives in a cave and there was a fire so we had to deal with a cave fire. If you want to look at the spectrum of what we deal with we go from an outhouse fire to a cave fire and everything in between. It’s a huge variety. Likely it’s the same things any department would face but with a few curveballs thrown our way.”

When the volunteers in Dawson aren’t dousing outhouse and cave fires, they are busy training and teaching the community fire safety.

“We go into schools quite often and share fire tips and safety and we try to encourage students on recruitment at a young age so they can give back to the community they live in. We definitely are still pushing very hard our smoke alarm in every home program and we also spend a lot of time together training as a department…Every Wednesday night for two hours, sometimes three, we do group training. So that’s 52 weeks a year and also additional specialty training however we can fit it in,” said Regimbal.

Challenges up north
Being one of the farthest north fire departments in Canada brings along its own set of challenges that Regimbal and his department deal with. One of them simply being the cold.

“Serving up here definitely can be unique when you’re looking at what mother nature throws your way with the cold weather,” said Regimbal. “You’re looking at weeks on end in the high -40 C, so we have that to deal with…A lot of times when you’re doing the training and you’re out in a fire in that kind of weather you have to keep your nozzles cracked open so there is continual water flow because once you stop the flow, within minutes your lines are freezing up on you.”

Other than the sheer cold of the Yukon, Regimbal said other challenges the team faces are just simply what comes naturally when people do life and spend so much time together.

“You have to learn how to take care of yourself and those around you. There’s always challenges, whether it’s from the government, or the citizens, but a lot of our current challenges are internal. We’re real people with real life problems and we all deal with things differently, but we try to find the joy in everything — the good and the bad — that’s what you have to do.”

Regimbal added that everything his team and he do has an impact on the community and the department members, so they do their best to respect one another and care for one another.

Looking Forward
Regimbal said he has been super fortunate over the years in that he has never had to organize what he called an official “recruitment call” and that volunteers so far have seemed to come to the department on their own.

“I’ve never had to officially seek out new recruits,” he said. “But that’s not to say our team and I aren’t talking about recruitment when we are out on a daily basis; at the grocery store, on calls, at businesses around town, I’d say we’re always advocating for new recruits and letting people know what’s available and how they can help out.”

Regimbal is incredibly thankful of the team at the Dawson City Fire Department and all the hard work they do as volunteers.

“I understand just how much we ask of our volunteers and appreciate the team so much. The reason the department is what it is, is because we have a team that genuinely cares for and wants the best for the community. It’s giving back to the community and just wanting to do the right thing. Sometimes when you’re doing it solely for the money, you’re missing the mark.”