During my stint as an instructor at the Ontario Fire College in Gravenhurst, one of the expectations that really impacted me was the awareness and importance of using gender neutral or gender-inclusive language in the classroom. 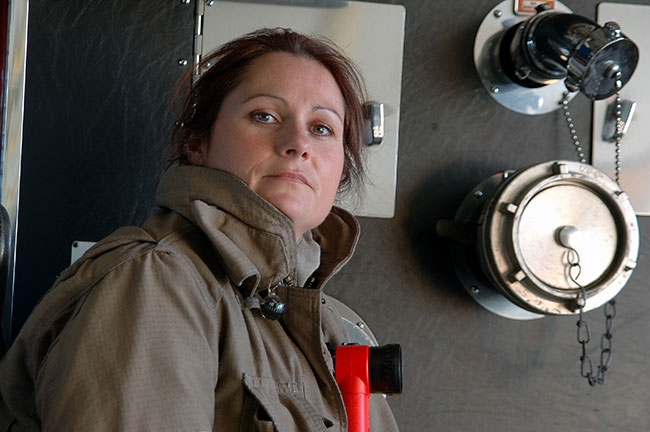 Once gender inclusivity is on your radar you can’t help but question many of the old-standby-but-perhaps-outdated terms we’ve come to accept as part of the fire service culture.

As a female who has been in the fire service for over 20 years, I’ve always been referred to as “one of the guys,” and never took offence to it. For me, it was more of a sign of acceptance into this unique and tight knit brotherhood, which is ironically enough, another term likely to change at some point.

In the classroom, I was infinitely aware of my use of the term “guys” when addressing the class as a whole, because it was impressed upon all of us as representatives of the province. For example, asking a question like: “How many of you guys have ever…?” We in the fire service say that all the time. It was something I often tripped over, and would almost make the situation worse, by adding a “. . . and girls” hastily afterwards, which just brought more attention to my use of terminology. And honestly, no one ever seemed offended by it, or at least, it was never brought to my attention.

But this is not to say that it’s a moot point. I whole-heartedly agree with the premise of using gender-inclusive language, as it’s simply respectful to do so, especially in the fire service where teamwork is of the utmost importance. We should be placing an emphasis on inclusivity to foster the strength of the unit.

Since I returned to my volunteer fire department in December, my fellow (there’s another term) firefighters and I have had this conversation a few times. When I was asked what alternatives to use instead of “guys,” I shared that I’d heard other instructors use, “folks,” “you people” and “class.” I’ll admit, “folks” sounds somewhat country-ish or laidback, and “you people,” depending on the tone and delivery, can come across as slightly condescending. I’m not saying I have the answers; I’m merely posing the question.

A friend in my hall, who is also an instructor at a private fire service college, said that he asks the class up front if anybody will be uncomfortable with his use of “guys,” and he says no one has taken exception to it to date.

I asked him how likely he thinks it would be that someone would feel comfortable enough to admit they were upset? People generally don’t like to be the odd one out –just food for thought.

Members in my fire department (by request of our dispatch, as I understand it) have recently transitioned from reporting the hall as “manned” to reporting it as “staffed.”

A couple of other terms from the good old days that have come up in our discussions are:

Firemen  –  This one is a pet peeve of mine and I have a beloved friend who can’t seem to stop using it after 40 years of service to our department.

Man door –  Hmmmm, maybe person door? This was one I brought up to the group.

Man down alarm – A captain in our hall questioned this one. I was actually surprised that I hadn’t thought of it. A point for you, buddy.

Brotherhood – Are we women included as sisters in the “brotherhood?” Or should we just refer to it as the “hood” now?

I’m sure there are many more outdated terms we continue to use. I invite you to tweet me or tag me on Facebook with anything you come up with.

It’s 2018 and the fire service is continuing to see a greater level of diversity among it’s ranks. This is not about giving anyone or any group special treatment, it’s simply about respect, good ethics and positive interpersonal skills.

For those of you in training roles, in officer positions, and quite frankly everyone in the fire service, when you’re addressing the group, I respectfully request that you keep in mind that your audience is no longer strictly “guys”.

With that being said, it’s not merely a male/female, man/woman dichotomy anymore. I’m sure there are transgender and gender non-binary members in our fire service as well, and I’d be remiss if I didn’t point out that developing and using gender-inclusive language means including everyone.

The world is changing and it’s our responsibility to change with it, if not change ahead of it.

Jennifer Grigg has been a volunteer with the Township of Georgian Bay Fire Department in Ontario since 1997. jhook0312@yahoo.ca