After 37 years in fire Williams acknowledges that it’s time to retire, but he knows the Fire Chiefs Association of BC (FCABC) is doing great things and he doesn’t want to miss any of it.

Williams has been the chief in Penticton since 2001; yesterday he showed me the town, its two fire halls, the risks in the community.

“That staff person is not going to be bringing people out of the building,” he said.

Taller buildings – the fire department has just installed a highrise prop at its training ground. Industry. New construction. And more wildfires – there have been several small ones already this season.

Standing in the 37 C-degree heat yesterday at a perfect vantage point on the eastern hillside, Williams – looking dapper in a crisp, white FCABC shirt, dress pants and polished shoes while I sweltered – stopped mid-sentence.

I could smell it but it took a couple of seconds to see the white wisps on the other side of the valley on what Williams knew was Penticton Indian Band land. The band has its own small fire department but Williams’ radar was up.

Williams was here when the 2003 Okanagan Mountain fire threatened the town but ultimately was pushed by the wind in the other direction, to Kelowna.

The day is seared into Williams’ memory. The Okanagan Mountain fire burned to the north, another wildfire was approaching from the opposite direction, a helicopter had crashed into the creek. “And,” said Williams, “there was a naked man in town with a gun.”

Clearly it’s a story Williams, a former broadcaster, has recounted many times in his booming radio baritone.

“If you did a table-top exercise and came up with that scenario everyone would say, ‘That’s never going to happen,’ ” Williams said.

But it did. And everything went as it should have; training kicked in and all responders did their jobs well.

Williams is pragmatic about the fact that not everyone at city hall understands that to call a meeting of the department’s 32 members and 36 auxiliary firefighters requires co-ordination and overtime pay, or that firefighters who work 10s/14s can’t go without showers for the weekend when the hot-water tank in the hall bursts on a Friday night.

Those frustrations are overshadowed by good things. Yesterday, a retired captain was at Station 1 when we stopped by, having just met with a woman he had pulled out of a burning structure more than a decade ago; she came to say thank you.

A couple of weeks ago, a patient who was extricated from an MVC – out in front of the fire hall – brought the crew a cake.

Williams, like every other fire chief in Canada, is as Type-A as they come – he volunteers with community organizations, is the FCABC’s career director, and never stops moving, even in 37-degree heat, as the conference host with more than 600 delegates in town, and a pesky editor firing off question after question. 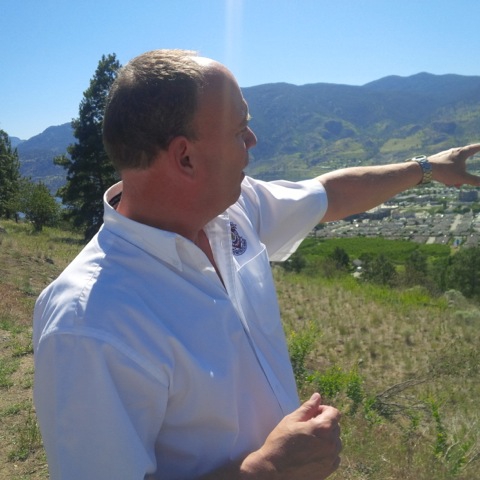 Fire Chief Wayne Williams points out the risks in his community.
Print this page