June 8, 2015, Penticton, B.C. - There’s something to be said for arriving a day early for a conference and trade show – mainly the opportunity to take in the local flavour.

And boy did we do that in Penticton before the Fire Chiefs Association of BC trade show and conference opened Sunday at 11:00 a.m.

With the three-hour time change, some of us were awake at 4:30 a.m. yesterday and headed out shortly thereafter on foot around the waterfront.

Lake Okanagan was pristine: the only ripples were the wildlife diving for more wildlife – a great blue heron, muskrat (I think), ducks and geese.

There was no traffic. I didn’t pass a single vehicle until I was almost back to the hotel, sneakers blissfully full of sand.

I asked on Twitter yesterday why we choose to live in southwestern Ontario when there are places like Penticton. The question was rhetorical (although I don’t see any reason why I can’t write and edit Fire Fighting in Canada from here!)

Being a Maritimer, I’ve always been a bit smug about the hospitality afforded by east coasters to come-from-aways. But having spent time in every province – this is my third trip to British Columbia in 18 months (and I’ll be back in September for the Canadian chiefs conference!) – I’m ceding the host-with-the-most award to Penticton Fire Chief Wayne Williams, who met us at the airport, even though I had let him know we had opted to rent a car and didn’t need a ride.

Williams came armed with maps and travel tips, which we should have used because Siri and her iPhone version of GPS took us part way to Osoyoos before the smart person in the back seat, who was working and had assigned navigational duties to others (and shall remain nameless but is writing this blog!) started paying attention and told the driver and navigator to do a U-turn in our not-even-a-little-bit sexy rented Ford Flex. (Not to name names, but I’m travelling with our Firehall Bookstore manager and our associate publisher; one was driving, the other was navigating – sort of.)

Turns out the navigational error was a good thing. I hadn’t realized how close Penticton is to Osoyoos, home of longtime Trainers Corner writer Ed Brouwer. So, not wanting to be presumptuous but with little choice given time constraints, I e-mailed Ed to ask if I could come and visit his Eagles Nest Ranch, which I had promised to do if I was ever in the neighbourhood, so to speak. I’m heading there this morning and have been promised a rancher’s breakfast, spectacular scenery and, hopefully, a visit with one or more of three new foals.

It will be a quick trip, though. I’m sitting in on a meeting this afternoon of women chief officers, and looking forward to a tour of Penticton’s two fire halls.

Day 2 of the BC Fire Expo – the trade show – runs from 9 a.m. until 3 p.m. today, followed by the conference opening ceremony and annual banquet. I’m seated at a table with Hope Fire Chief Tom DeSorcy, who writes our Volunteer Vision column with eastern counterpart Vince MacKenzie.

Tom, always a gracious host, with his wife, Denise, took a group on a winery tour Sunday morning. We learned a lot from some wonderful, laid-back B.C. proprietors – starting with the lovely host, Sharon Hickey, at Red Rooster Winery whose parents are from – where else – Cape Breton. My bank account is a bit lighter, my suitcase a bit heavier, and the Naramata Bench wine makers were, I’m sure, smiling as our Visa and debit cards took a beating.

The banter was brisk, the sun was shining, and the company was first-class, but the trade show beckoned and we returned to reality, the little bit of laid-back B.C. attitude I promised Friday to find having been adeptly acquired. 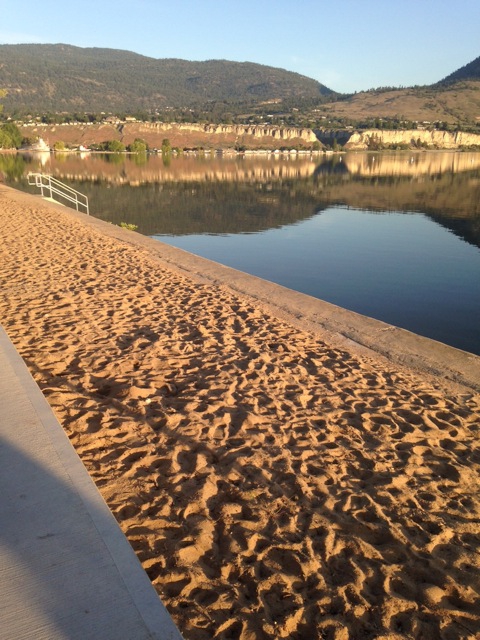