Aug. 31, 2015, Toronto – Hallelujah! It took 142 years, but Rhoda Mae Kerr was installed Thursday as president of the International Association of Fire Chiefs (IAFC) – the first woman to hold the office.

One hundred and forty-two years.

Kerr is the fire chief in Austin. Before she was a firefighter, she was a phys ed teacher for 13 years.

I first met Kerr in 2011 at the International Conference for Fire and Rescue Executives in Toronto; by that time, I had been editing Fire Fighting in Canada for four years and had travelled to a dozen or more conferences from coast to coast.

Kerr was the first – not kidding – female chief officer I ever heard present at a fire-chiefs conference. I thought that was appalling.

I hovered at Kerr’s table after her presentation in Toronto, wanting to develop a professional relationship so I could make others aware of her leadership expertise.

Kerr has attended Canadian Association of Fire Chiefs conferences as a member of the board of the IAFC, and last September, in Ottawa, we spent a fair bit of time together (some of it on the dance floor at the wildly entertaining fifties swing night!).

Kerr is widely respected as a fourth-generation firefighter. She pulls no punches. Her Texas drawl is endearing and, like me, she stands five feet, 10 inches (six feet in heels!), so is a rather imposing figure.

Kerr has been in the fire service since 1983. Before she became chief in Austin she was chief in Little Rock, Ark. She spent more than 20 years in the fire department in Fort Lauderdale, five as deputy chief. She holds the chief fire officer designation and is on the executive of the IAFC Metropolitan Fire Chiefs Association.

She has a website – of course she does! – www.rhodamaekerr.com. “Chief Kerr is a 30-year veteran, and fourth-generation firefighter who is currently chief of the Austin Fire Department and president and chair of the board of directors of the International Association of Fire Chiefs, where she continues to break glass ceilings,” it says.

Kerr is a role model, no doubt, for women – and men. As are the likes of Essa Township Fire Chief Cynthia Ross Tustin and Lake Louise Chief Keri Martins and the scores of other women who are chiefs, deputies, training officers, public educators, dispatchers and firefighters.

In my craft – journalism – equality has never been an issue. But journalists generally chase fire trucks and take pictures of burning buildings – neither requires remarkable physical ability, endurance or cognitive resilience. It’s challenging for women – and men – to become firefighters; it’s even more challenging to rise to the top, no matter your gender.

Congratulations, Ms. Kerr. You’ve got this. 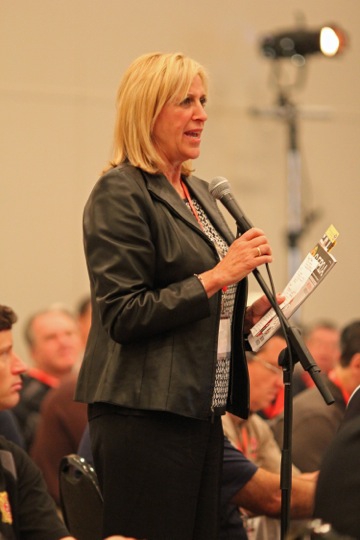 Rhoda Mae Kerr became the first female president of the International Association of Fire Chiefs on Thursday. It took 142 years
Print this page