Oct. 5, 2015, Sydney, N.S. – I was walking out of our Firefighter Training Day in Toronto late last Saturday afternoon – in my own little world after a long (but fabulous!) day and rather windblown from taking photos outside – when a sweaty but happy firefighter said "I read all your blogs. You're bang on."

While it's nice to know people (well, at least one!) are reading and enjoy the edgier news/political blogs, it's also tough to keep up, particularly this month with travel to Thunder Bay for FireCon, Victoria for the Canadian Association of Fire Chiefs conference and to Nova Scotia for an abbreviated vacation (coast to coast in eight days!). There's also a magazine to write and edit and presentations to prepare and meetings to attend and a Firefighter Training Day to help run!

But with time to kill in Halifax airport – where the Tim Hortons line is still the slowest in Canada – and now, on the return trip, delayed in both Cape Breton and Halifax (where the Tims closes at 9 p.m. – not kidding!) due to torrential rain, there is time to regale you all with my witty prose!

So, a (very brief!) synopsis of Life on the Road since Sept. 8, when I last posted here.

Most embarrassing moment: Car-fire evolution. Live and learn – to ask for more direction about nozzle patterns and never let another firefighter hold your camera (after teaching her how to use the video option!) while you try something new!

{youtube}tCxwSMH4CM8{/youtube}
Editor Laura King is put through her paces by Drager instructor Rich Graeber on the car-fire prop at FireCon in Thunder Bay last month. Video by Natalie Quinn.


Playing politics: Many of you know about my (sometimes precarious) relationship with the Office of the Ontario Fire Marshal. The former fire marshal left Sept. 18 to be a deputy chief in Toronto; the former former fire marshal vacated the position in June. Which caused some confusion about who was going to fill the many speaking roles at FireCon – which is divided into a leadership track and a training track.

I mentioned longtime OFM staffer Barney Owens in a previous blog, and I had the pleasure of meeting him again in Thunder Bay, hearing him speak about upcoming internal changes and initiatives, and invited him to stay in the room (I'm fairly certain he was making a beeline for the door before I intercepted him!) for my presentation on social media. Which he did. I picked on him a bit – others in the room were similarly singled out! – and he responded with aplomb, thoroughly answering questions about the OFMEM's media strategy and being a good sport.

(Incidentally, an interim fire marshal was named on Wednesday but I only know this through the grapevine. It is, as I suspected, an appointment from the policing side of emergency management and someone who is, I'm told, not in the running to become the permanent fire marshal. More on this tomorrow.)

Sept. 19-23, CAFC, Victoria
Highlight: Volunteer Vision-LIVE! with columnists Vince MacKenzie and Tom DeSorcy, a bear-pit session during which we threw out questions, comments and ideas about recruitment, retention, retirement, professionalism, social media and work-life balance for chief fire officers. The audience was engaged and passionate and, we think, we offered up some solutions to bring home to departments from coast to coast to coast. (We're not exactly a shy bunch!) Stay tuned to a conference near you – we're taking the show on the road!

The best part? The dripping T-shirts and smiles at the end of the day, and the number of students from departments as far away as Manitouwadge (in northern Ontario) and Montreal.

The students – rookies and seasoned veterans – trained for free, many returning for a second or third year in a different training session.

Dozens shook our hands and thanked us at the end of the day, sent emails or posted on Facebook.

It was our pleasure!

Sept. 28, Maritime Fire Chiefs Association conference planning, Sydney, N.S.
Shameless plug for the 2016 MFCA conference in MY HOME TOWN! I met last week with conference chair Ian McVicar, a volunteer deputy with the Cape Breton Regional fire service. Ian has more ideas than a fire truck has chrome, and as a firefighter and software company principle, he is a stickler for detail. I've been waiting eight years for the MFCA conference to be in beautiful Cape Breton! On the agenda . . . Volunteer Vision-LIVE!

Oct. 1, Sydney, N.S./J.A. Douglas McCurdy Airport
No one knows who Douglas McCurdy was – an aviation pioneer and 20th lieutenant governor of Nova Scotia – but the airport that bears his name has been considerably upgraded over the last several years (which is good for the speakers who will be flying in to next year's MFCA conference!). That said, there's no Tim Hortons and the red wine (I'm on vacation, remember!) selection is . . . minimal. But the people are nice and the Jays game is on while we wait for a delayed flight to arrive from Halifax then turn around and take us back there and then on to Toronto . . . where I will stay for 11 days before heading to Winnipeg for the Manitoba Disaster Management Conference. 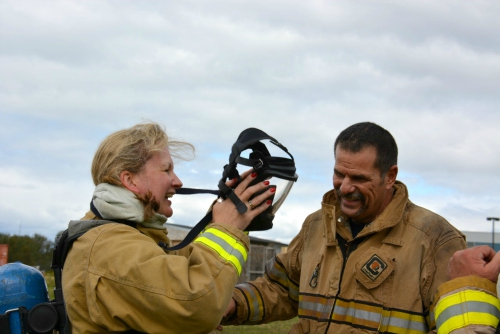 Laura King and Drager instructor Rich Graeber share a laugh after a car-fire evolution at FireCon in Thunder Bay Laura King has been coast to coast over the past month. Read a brief synopsis of her adventures at FireCon
Print this page