Sometimes we need to be taught a lesson or two, and sometimes the crucible of fire does just that. It’s long been said in the fire service that we should learn something from every call we attend. One memorable fire in particular taught me several valuable lessons I needed – this is what I learned from getting burned. 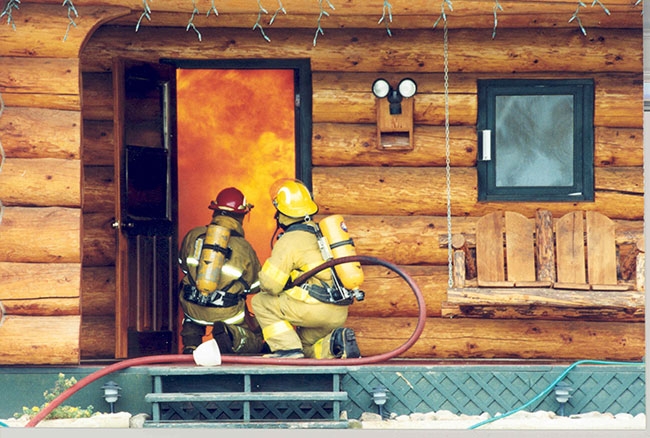 Learn from every call. Here Sometimes we need to be taught a lesson or two

As our crew pulled into the lot that cold, snowy morning , we saw that we had a working fire in a house trailer. On the ride from the hall, I kept the recent deaths of two Winnipeg firefighters in a flashover in the back of my mind. We pulled our lines, packed up and got ready to enter. It was a typical house trailer. There were small windows to the left of the door and larger ones to the right, which indicated the fire burning on the trailer’s left side was in a bedroom or the bathroom. The plan was, enter and turn left, knock down the fire and complete a search. I cracked the nozzle of a 1 ½ – inch line to check the flow, then my partner and I quickly did a buddy check.

As soon as we entered the door the heat was unbearable. “It’s too hot, we’re searching right!” I hollered to both my partner and the officer outside the door. As we advanced, I paused to pull down the cuffs of my jacket – they had no thumb loop or hole, and my wrists were uncomfortably hot. There was virtually zero visibility and the heat was intense. When we reached a window I asked my partner to break it. He hadn’t brought a tool so I knocked it out with the nozzle. As we continued to advance I applied a few short bursts of narrow fog to cool the thermal layer. Shortly after we turned the alpha-delta corner, I told my partner it was too hot and we were getting out.

We turned about face and I followed him, keeping the nozzle with me in case it was needed. In our hasty retreat with such low visibility I lost contact with my partner but I could hear him in front of me with the wall and hose to follow. As I passed the window I considered bailing from it but that would have guaranteed losing contact with my partner. Flames licked across the ceiling and I applied another short burst of water. Then I was suddenly obstructed but I didn’t know what was blocking my path, likely a kitchen table or chair. I tried moving the object, but I couldn’t. I tried getting around it, but I couldn’t. I decided to go over it and as I staggered towards the light peeking through the doorway, hands reached through it and pulled me out.

To my great relief my partner was also outside, smoke and steam streaming off him. As I cooled down, I realized I had second-degree burns circling each wrist, as well as a few spots on my neck and face. The blisters on my wrists immediately broke, so it was off to the hospital for dressing. From there, I went  home for a shower and then I returned back to the office to finish the workday, only two hours after I left to fight that fire. An unwitting coworker stuck her head in my office and asked if I knew where the smell of burned bacon was from – it was me.

Several days passed before I saw or spoke to any of the other firefighters, and I felt pretty low. Would they consider me a liability? Or worse, would my peers reject me altogether? When I finally saw the chief, what he said made me feel better. We all moved on, but that doesn’t mean I don’t carry the lessons I learned during that fire on the scene with me today.

Learn from every call. Here

So, here are five things I learned from this fire.

I know this closing advice is far from original, but it bears repeating: training is crucial to avoid getting burned. Firefighters must commit to continuous training, practice and study, knowing that we continuous learning helps to keep our colleagues and community safe. Take the courses, show up for training night, keep reading – and learn from every call.

David Moseley is a forest officer with Alberta Agriculture and Forestry, and lead training officer with Lac La Biche County Fire Rescue in Alberta, focused on operations; other areas of interest include instructing, CISM, and wildfire investigation. Contact him at david.moseley@gov.ab.ca