We began to look at the headfirst ladder dive last time in our discussion on escape techniques for firefighter survival. We laid out the foundation for why this is an excellent tactic to use for personal escape/rapid egress from a structure. As mentioned last time, I detailed that there are two primary methods for rapidly escaping using the head first ladder dive. We are going to explore both this month and break them down step by step.

The first option is a very basic method for executing this – it is the straight descent method. The firefighter inside the structure knows that they must get out right away or face a deadly outcome by staying inside. They will have located a window within the room and using their hand tool (if they have one with them) break the glass and clear out the window. If they don’t have a hand tool with them, they can break the window using any method or object they have access to as long as the window is broken or opened up.

The window in question will hopefully have a ground ladder resting below the sill of the window ready for rapid escape for any firefighter. This will be part of the proactive fire ground tasks that the RIT team or driver can perform, and when it is done, it needs to be communicated to the fire ground for their knowledge.

The firefighter will be staying low due to the extreme heat forcing them staying low. They can use their one arm to feel for the ladder tip just below the windowsill to make sure it’s there. Once confirmed that the ladder is present, they can start their rapid escape and descent. While staying low in the window, they will start to exit the building head first, lying flat over the window sill and on the ladder tip.

Once all the way out of the window, their whole body should be lying flat on the ladder with their head facing down toward the ground. As you will see in Photo 1, the firefighter is completely removed from the building and is ready to descend the ladder hand over hand to the bottom.  By going hand over hand, rung by rung, the firefighter is able to control their descent down (this is also a slower method of the head first ladder dive). 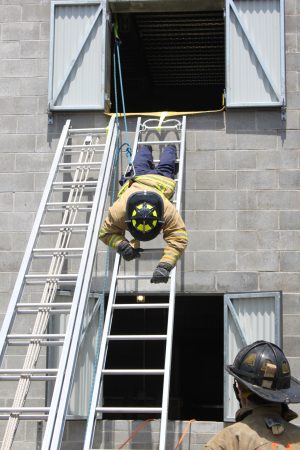 Descending the ladder hand over hand to the bottom.

The one downside to this method is that if the firefighter is completely fatigued with exhaustion, they may not be able to hold themselves in this position while trying to “walk” down the ladder hand over hand. They may drop off the ladder or tumble down to the ground.

The second option is a quicker, aggressive option but comes with a little more risk. This is called the “hook two, grab three or four rung” method. This particular method involves a rotational turn on the ladder putting the firefighter’s feet first on the ladder and their head facing toward the building so that they can climb down or slide down.

The steps leading up to this maneuver are the same as described above. Once ready to exit the building, the firefighter will hook the second rung with their one arm as seen in Photo 2. This arm will be the firefighter’s dominant arm as it will provide the firefighter with the ability to secure themselves to the ladder and prevent them from falling off the ladder as they continue diving out the window. 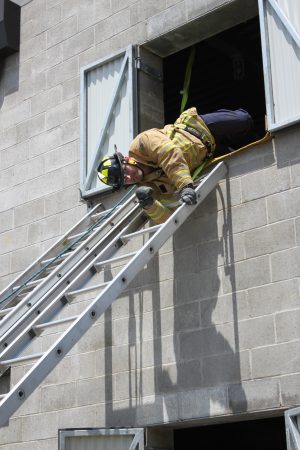 A rotational turn on the ladder to face the building so they climb down or slide down. 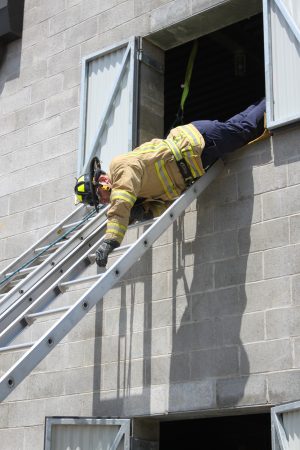 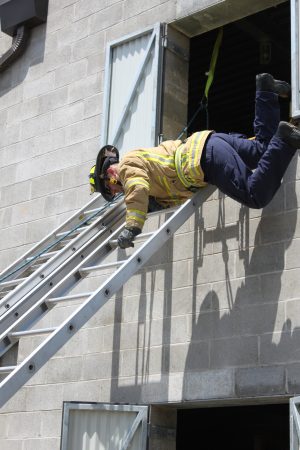 Using gravity as an assist, the firefighter’s body will be completely out of the building.

The firefighter’s feet land on the rungs of the ladder. All photos by Mark van der Feyst

This method will allow a team of two or three to rapidly exit a building and get down to the ground without blocking or clogging the window or ladder while each firefighter gets out slowly. This technique works and has been proven on the fire ground with multiple firefighters performing this when needed – the key to this is to practice it and become proficient with it.

Mark van der Feyst has been in the fire service since 1999 and is currently a firefighter with the FGFD. Mark is an international instructor teaching in Canada, the United States, FDIC and India.  He is the lead Author of Fire Engineering’s Residential Fire Rescue & Tactical Firefighter books. He can be contacted at Mark@FireStarTraining.com