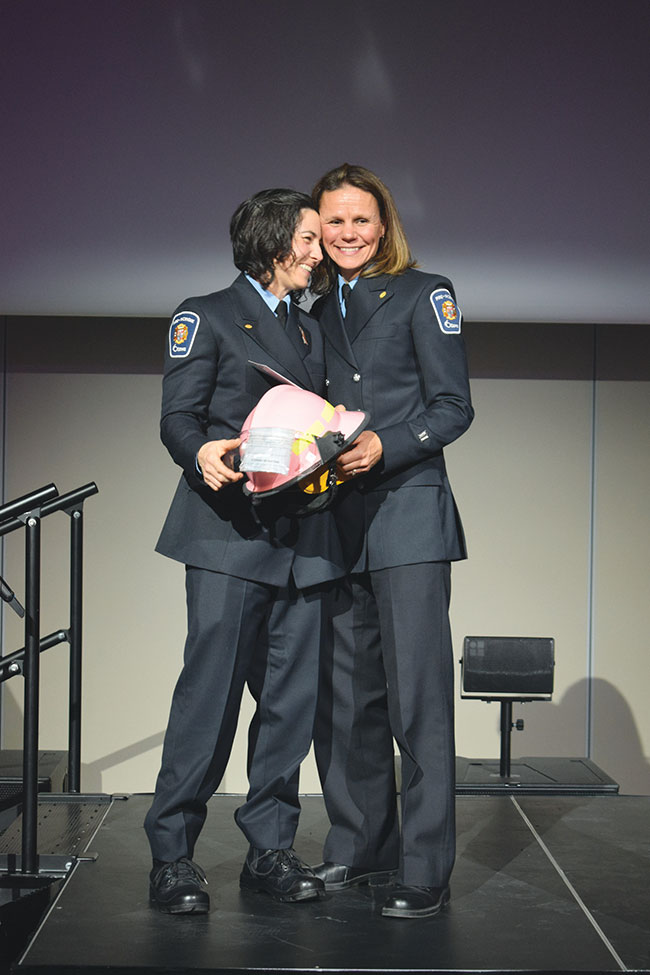 Fire Service Women Ontario (FSWO) celebrated a decade of connecting and empowering women at the association’s conference and AGM in Ottawa.

The symposium was hosted by Ottawa Fire Services and La Cité, a French language college of applied arts and technology. From Oct. 18 to 20, 2019, firefighters and officers from Ontario and beyond came together for professional development and networking.

Festivities commenced with the opening ceremonies led by emcee Annette Goerner, host of Ottawa’s CTV Morning Live. Dinner and dessert were followed by a keynote speech from Dany Cotton, London’s first female fire brigade commissioner. Cotton’s fire service career started in England in 1988 and she has broken countless barriers for women in the industry since. During her speech, she spoke candidly about climbing the ranks as a woman in the fire service; a journey she found peppered with harassment and negativity. Cotton noted that the difficulties she faced were discouraging, but any obstacles placed in front of her inevitably pushed her to overcome and succeed.

Throughout the evening, four FSWO members were recognized for their efforts and positive impact on the fire service. Capt. Mary Fischer of the Calgary Fire Department was given the 3 “E” award, which recognized leadership and mentoring. The President’s Trailblazer award was given to Jess Clermont of Toronto Fire Services for her work as an instructor and advocate for women in the fire service. Capt. Thomas Keaney of the Burlington Fire Department in Ontario took home the Diversity and Inclusion award for his contributions to the city’s diversity and inclusive efforts alongside his development of the Truth and Reconciliation Awareness program. Carissa Campbell Darmody of Ottawa Fire Services was presented with the Pink Helmet of Courage award for the development of new fire fighting safety procedures after she suffered an on-duty life threatening incident. The protocols were rolled into a new program titled “From Practice to Knowledge”.

On a bittersweet note, Louise Hine-Schmidt, FSWO president and co-founder of the organization, gave a speech formally stepping down from her role. Schmidt announced her successor, Pike Krpan, and stated she will continue to support the FSWO board of directors as immediate past president.

Over the weekend, attendees honed their skills in hot classes that improved their proficiency in areas such as forcible entry, auto extrication, search conducting, solo competencies, fire behaviour, incident command, radio communications and chainsaw management. Firefighters looking to improve their physical fitness could partake in a yoga class, CPAT prep or try their hand at FireFit. A selection of career-focused classes were also offered – one for women interested in joining the fire service and another for any firefighter wanting to learn the ins and out of recruitment.

For attendees with a passion for tech, Paul St-Onge, emergency situations trainer and professor at La Cité, led two workshops. His emergency vehicle operator workshop featured a driving simulator to help better prepare apparatus operators for the road. And, his course on drones in the fire service examined the benefits of this new technology and explained the regulations from Transport Canada Civil Aviation regarding piloting UAV’s in Canada that came into effect in June 2019.

Here is a sample of what was offered through in-class sessions, which dialed in on the themes of firefighter health and leadership. On the subject of mental health resources for firefighters, members of Ottawa’s Emergency and Protective Services held a session outlining the city’s united tri-service approach to peer support. Alain Pellegroms, Lorraine Downey and Brent MacIntyre are the peer support coordinators for the fire, paramedic and police peer support teams. Over the past two years the three coordinators shared ideas and resources to help create an effective peer support network for first responders. The session emphasized the similar challenges faced by all first responders and the importance of breaking down the silos of emergency response.

The pressing topic of firefighters and exposure to carcinogens was covered by Jennifer Keir, research associate with the University of Ottawa. Keir presented findings from past and present research on cancer rates in firefighters, focusing on how to determine fact from fiction when it comes to reports surrounding specific exposure reduction procedures.

Fire Chief Jona Olsson of the Latir Volunteer Fire Department in New Mexico, led two in-class sessions, one of which was titled, Breaking the Silence. Here, Olsson openly discussed the elephant she sees in many fire halls: discriminatory, racist and sexist comments. Participants were presented with case studies and challenged to come up with appropriate and respectful ways to intervene and mitigate the situations.

At the annual general meeting, new president Krpan spoke about the organization’s achievements over the past year, referencing the FSWO’s continued research with McMaster University on gender-based barriers in the fire service, and their recently developed partnership with Canadian Firefighter magazine. The FSWO 2020 symposium will be held in Oakville, Ont., from Nov. 6 to 8.


Related
Out of the ashes: Letter from the President of FSWO
Why your department should offer a training camp for young women