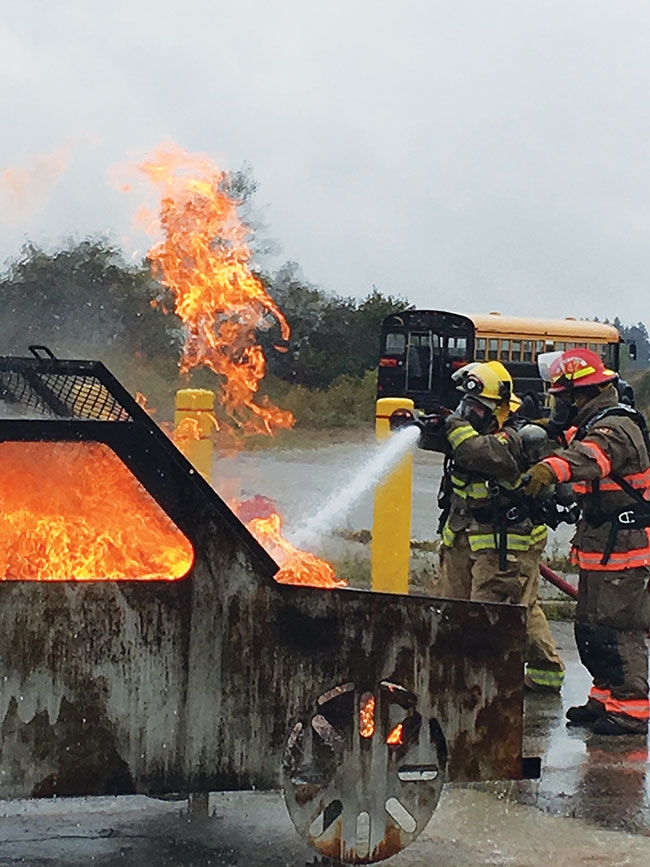 Casey was diagnosed with PTSD in 2005 and shared some of the struggles he’s faced ever since, such as painful memories, nightmares, awkward conversations with co-workers and more. He attributes a lot of what led to his diagnosis to experiences he went through as a firefighter and fire chief such as seeing deaths, accidents, severed limbs, changes in a colleague’s behaviour and other emotionally disturbing or distressing incidents.

“Post means after – meaning that the emotional scarring and trauma shows up after an event – after you’ve seen the dead body or after you’ve witnessed something distressing and that causes stress,” said Casey.

He also defined a disorder as, “any disruption to regular bodily structure and function.”

But what about the trauma and distressing events that took place before he entered the fire service?

Casey labelled those experiences as things that led to his “pre-post-traumatic syndrome.”

“I was diagnosed with PTSD in 2005 after what we thought was a heart attack – when, in actual fact, I had lived a life full of traumatic and distressing experiences that made me pre-disposed to PTSD way before the diagnosis,” he said.

Casey went on to explain some of the experiences that contributed to his pre- and post-traumatic stress such as growing up with an alcoholic and abusive father, seeing his parents’ dysfunctional marriage lived out, then watching his brother battle and eventually succumb to cancer, and a few other life experiences that live up to the definition of distressing, traumatic and disturbing. They were all things that led him to his official diagnosis of PTSD in 2005.

“Let’s face it, though. Myself and most of you all here have gone through similar situations prior to ever joining the fire service,” said Casey.

He said he wanted to share his story because he wants PTSD to continue to be addressed and talked about within the service and to see more people diagnosed and helped, but also so people are more comfortable addressing the things that happened prior to any official diagnosis.

During a question-and-answer-period after his presentation, Casey said there have been people in his life and line of work that have looked at him in disbelief and told him that his experiences don’t count as PTSD, or that other people out there have had it much worse.

And, his response to that is often one that includes anger, sadness and remorse. He’s angry that people don’t believe him, sad that people like himself are getting ignored and remorseful that there are people in his line of work that simply don’t get it.

Casey said he has a lot of family support – support in the sense that his wife and children all acknowledge his condition and do what they can to help.

Casey said his wife is unable to be his pillar of strength completely because it’s not something she is able to empathize with.

“She cares, she loves me, she wants me to be okay, but I can’t talk to her about my feelings and what I struggle with all the time because she hasn’t gone through it herself and doesn’t necessarily get it,” said Casey. “She cares about me and loves me, but she isn’t my ‘go-to’ in this situation.”

Casey said that it is hard at times to not have his spouse as his go-to support system, but suggests that everyone diagnosed with PTSD should reach out to friends, family, colleagues and anyone around them who can be a listening ear and support system to them. He also suggests taking time out of the day to decompress, de-stress and find a way to relieve yourself of the day’s emotional and disturbing experiences.

This year’s symposium was the organization’s 8th annual event and carried the theme “Empowered Together.” There were several other guest speakers as well as hands-on training courses and in-class sessions.

Speakers spoke on topics such as hiring, what to do when you doubt yourself, responding to electrical emergencies, social media tactics and more.

One of the courses was aimed at women who are thinking about changing careers and becoming a firefighter. The day-long course provided women with an opportunity to gain exposure to firefighter training.