The pandemic, hearth health in firefighters and what you need to know about CAC scans. 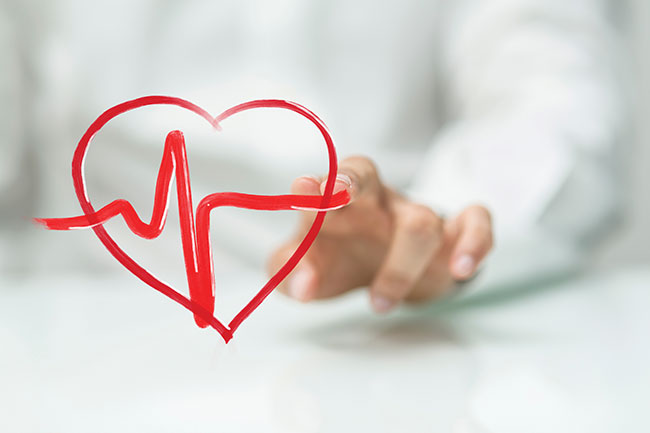 A recent survey by Heart & Stroke showed that people with heart disease became worse off, physically and mentally, during the pandemic. Photo credit: © vegefox.com / Adobe Stock

The ongoing COVID-19 pandemic has exacerbated cases of cardiovascular disease by disrupting much-needed care, screening and research, shows a report released in October by the Heart and Stroke Foundation of Canada (Heart & Stroke). Considering that NFPA research shows that sudden cardiac death is the leading cause of on-duty deaths among firefighters, this new research from the foundation is troubling.

“Its findings showed that the pandemic had a significant impact on heart and brain health,” said Patrice Lindsay, Heart & Stroke’s director of health systems change. “Those living with heart disease are worse off – both physically and mentally – since they could not always access the care they required during the pandemic. There is also fear that the COVID-19 virus damaged previously healthy hearts. The pandemic has also increased inequities in care, and this is expected to continue. ”

What’s more, Lindsay said that 78 per cent of those surveyed are worried that the pandemic has slowed or stopped critical heart and brain health research. With 1.6 million people in Canada living with heart disease and stroke, representing two of the three leading causes of death in the country as per Heart & Stroke research, a concerted effort for prevention and screening is paramount.

We know that firefighters are at a heightened risk of experiencing sudden cardiac events due to the nature of the job. Running into burning buildings, being the first on the scene of a fatal motor vehicle accident, carrying heavy weight under intense heat – all of these instances can trigger a sudden cardiac event. Undetected heart issues are of particular concern. A 2021 study, “Pathoanatomic Findings Associated with Duty-Related Cardiac Death in US Firefighters,” published in the Journal of the American Heart Association, found that “evidence of a prior myocardial infarction conveyed approximately a six-fold increase in the risk of duty-related cardiac death. Diagnosed CHD (coronary heart disease) is one of the strongest predictors of SCD (sudden cardiac death) in both the general population and among firefighters; and among firefighters with diagnosed CHD, those with evidence of myocardial damage were more likely to experience a fatal outcome related to a duty-related CHD event.”

Dominique Ashen, PhD, director of Johns Hopkins Cardiovascular Disease Prevention Program for Firefighters and a nurse practitioner at the Ciccarone Center for Prevention of Cardiovascular Disease, says helping fire departments develop programs that detect and minimize risk for cardiovascular disease (CVD) is crucial to preventing on-duty cardiac arrest. Ashen, along with colleagues Dr. Elizabeth Ratchford and Kathryn Carson, conducted a study published in August of 2021 in the American Journal of Preventative Medicine titled, “Coronary Calcium Scanning and Cardiovascular Risk Assessment Among Firefighters.” They found that a coronary artery calcium (CAC) scan can provide early detection for firefighters at increased risk for cardiovascular disease.

“The CAC scan is a non-invasive, low-radiation, fast CT used to identify calcified plaques in coronary arteries and gives us a measure of the burden of atherosclerosis for an individual,” explained Ashen.

The study was conducted on asymptomatic firefighters from three Maryland counties aged 40 and up with no known cardiovascular disease or diabetes. It found that 39 per cent of firefighters who received the CAC scan had calcified plaque in their coronary arteries, with 91 per cent of those having an above average amount based on their age, sex and ethnicity.

“The CAC screening helps us refine the CVD risk assessment and allows us to better manage the cardiovascular health of firefighters. Without the scan, we would have missed 39 per cent of firefighters with subclinical disease,”Ashen said.

She explained that with the knowledge gained from the CAC scan, medication – like statins to lower cholesterol – as well as lifestyle changes that include a healthy diet, exercise and eliminating substances like alcohol and tobacco, can be implemented, providing a solid prevention program for cardiovascular disease and thus significantly lowering the risk of sudden cardiac death. By getting fire departments, primary care providers and occupational health departments working together to support the CDPP, firefighters will benefit.

“It’s all about starting risk assessment and risk reduction early. For those firefighters less than 40 years of age in whom we do not generally do CAC screening, you can provide education about healthy lifestyle habits and their importance in healthy blood pressure and cholesterol levels, two important risk factors for CVD,” said Ashen.

While the CAC scans on female firefighters in the study did not return any worrying results, Ashen reminds us that it’s still important for this group to be tested because heart disease remains the number one risk for death in women in the U.S.

This approach is backed up by a report by the BC Injury Research and Prevention Unit and the University of the Fraser Valley, “Determinants of Injury and Death in Canadian Firefighters: A Case for a National Firefighter Wellness Surveillance System.” The report stated that cardiovascular disease is the leading cause of on-duty death among firefighters due to the physical demands, emotional stress and environmental hazards that place stress on the cardiovascular system. According to the findings, the highest percentage of fatality claims due to cardiovascular disease among firefighters were from males between the ages of 55 and 59 (28.6 per cent).

A step-by-step protocol for heart health was laid out by The Center for Disease Control and Prevention (CDC) and The National Institute for Occupational Safety and Health (NIOSH) in their report “Preventing Fire Fighter Fatalities Due to Heart Attacks and Other Sudden Cardiovascular Events.” The report recommends fire departments can reduce on-duty heart attacks and other sudden cardiac events by providing medical evaluations, making sure the doctors doing the exams are knowledgeable about the physical demands of fire fighting, having a comprehensive wellness/fitness program, controlling exposure to contaminants through PPE and best practices at fire scenes, ensuring good staffing levels to prevent over-exertion, on-scene rehab and a hearing conservation program.

Add to this the coronary artery calcium scan, and you have a solid cardiovascular disease prevention program that will protect the lives of firefighters.

As the pandemic wears on with new variants cropping up and bearing down on populations around the globe, a disruption to healthcare and research into heart health may linger, making it imperative that fire departments – and firefighters themselves – take charge by way of cardiovascular disease prevention and screening.