Editor Laura King spoke with Chris Fuz Schwab, the deputy chief in Smoky Lake, Alta., after he returned from Fort McMurray. This is an edited transcript of their conversation. 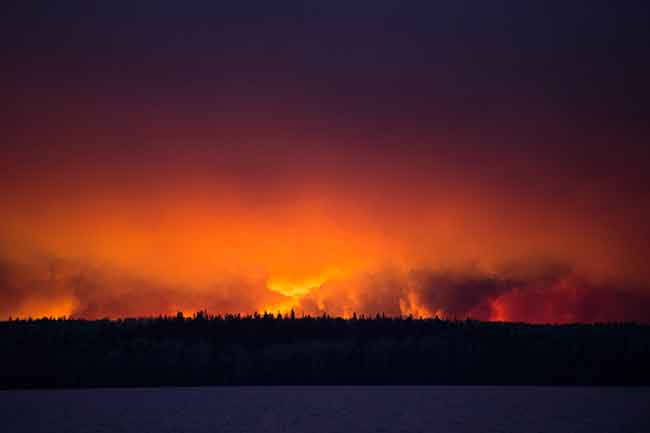 The province contacted our director of emergency management and requested us on Tuesday, the day the fire took off, and we happened to already be at a fire in our own area and couldn’t immediately respond, so the province pretty much ordered us to go to bed and be ready to leave first thing in the morning. We left Wednesday after getting all of our stuff in order – three of our members in a pickup with our structural gear and some food and water and went for the long drive up to Fort Mac.

At first the province asked for fire trucks and the next day just said get manpower here – structurally qualified, NFPA 1001 guys.

Well, we got stopped by RCMP – the highway was shut down. They didn’t want to let us through and we told them pretty well we’re going through. We had respirators with us and we put them on and drove through fire and smoke to get up there. After we passed them and some RCMP in black SUVs – which is pretty interesting – we reported to command at MacDonald Island and we got into the queue; there was a line up of rigs and trucks that were already there or were just pulling in and we were deployed within the first 10 or 20 minutes.

We were up in the Timberlea neighbourhood; we split up and jumped onto whatever rig we could get on. My two boys went with a private company, Fire Power, and I jumped in with the City of Leduc.

We got to the scene and obviously many homes were already on fire a little ways down the road and we were instructed to set up a defensive line, which we did; there were probably six to eight 38-millimetre lines between houses.

There was another group – several engines and an ARFF truck – that was probably two blocks from us and we were watching the fire come towards us. We were considered the last line – if the guys had to bug out of where the fire was, which did happen . . . We were spraying down houses and trying to buy time to make a proper defensive line. We retreated probably twice, and ended up back up against a row of houses in the backyards. We stayed there the night – I don’t know how many hours we were in that spot. We got back to the station about 9 a.m.

We were watching the houses in front of us burn down one after another. It was fast but in your mind you’re just watching . . . one, two, three houses.

We got a rest on the scene here and there – you’d see guys that would pull back and would have time to reassess, and guys would be sleeping on their trucks – quick 10-minute power naps. We had a lot of guys up there so we were able to do it safely.

After we held the line on this one specific street, we woke the guys in the morning and looked around and did a quick assessment; our areas were safe. We looked around and saw how far the fire had spread and it was unbelievable. There was no place to sleep so I slept in the box of the truck and my two guys slept in the cab. We grabbed a bite to eat from a biker lady named Betty – a turkey sandwich, the best food I’d ever had. She’s my hero. So we had a quick bite and just gave that lady a hug and got back in the queue. We had about an hour’s sleep.

We were deployed again to the downtown core, looking for spot fires. This was Thursday, when the city was completely encircled – the fire had circled to the east side of the city; there’s a big hill on one side, all forested, and it burned around there and jumped in a couple of spots.

We were just in our pickup trucks – a few departments there; us, St. Paul, Cold Lake and Greenview, all in pickups. I think we did a good job; we found one structure fire – a garage burning and we put that out with limited water and makeshift hand tools (pretty much garden tools that we found in people’s yards).

We did the downtown all day and all night – I can’t remember what time we got back the next day.

We stayed Thursday and Thursday evening – all downtown. It was like it was snowing downtown, but it was all ash. That’s something that I’ll never forget. We went again for what everyone deemed was our mandatory naptime – which, again, was probably another hour.

Friday we ended up back in the queue and ended up being deployed to Saprae Creek out by the airport, putting out spot fires around homes and prepping yards for the fire to come through for the second time, through this neighbourhood that had been burned out already. But we lucked out – we got the water bombers and planes and helicopters. We were pretty much there at Saprae Creek the entire time until 10-11 p.m., I’m guessing, and then we reported back in and tried to get back in the queue. I think the staging officer noticed us getting back in the queue and said no – mandatory naptime again. And we did nap. I talked to the IC on scene [Parkland County Chief] Brian Cornforth – because we had already been up there for quite a few hours already and asked at what point did he want replacements – and he said, “What in the heck? You guys are only supposed to be here for 48 hours.” But nobody told us . . .

We stayed overnight just in case; during the daytime there was a lull – we had time to mentally get ready for the evenings; but the evenings, Wednesday and Thursday, when we were there, were pretty scary. It was constant work – moving hose, advancing lines, backing out, then advancing again, so it was nice to be told sleep was mandatory.

When we got back I called ahead and told my DEM we need to sit down for diffusing and we did; we sat down and discussed what happened and our feelings about some of the stuff we had to do on those evenings, which I won’t go into . . .

[While we were in Fort Mac] upstairs in the evacuation centre, where we had been told to get a bite to eat because at that point there was nobody in there, we talked to an evacuee who asked us questions; we were trying not to say anything that would give her false hope or upset her and, of course, we don’t know everything because we were assigned to an area. That was tough and I think she noticed that . . .

[Back at home] we had just watched hundreds of homes burn. Dealing with it afterwards . . . we thought we had. We had a fire call later on and I didn’t go – I stayed back and while the boys were at a fire we got a phone call for somebody burning in their backyard during the fire ban and I went there and kind of exploded on the guy and then broke down. I don’t remember much about it but that poor ratepayer came up and gave me a big hug after I blew up on him, and my chief and my DEM got me help and now I’m dealing with it.

My guys too, they’re talking about it and I try to get them also talking about past events too. In my case, it wasn’t just the actual event, even though it was pretty messed up some of the stuff we were witnessing, it was a triggering event, after 13 years.

I’ve always said that we probably have the best CISM groups and we always call in victim services for our guys and we always sit down and talk and low and behold, all it takes is somebody with a little campfire in their backyard and I’m definitely rethinking my approach on CISM now.

We were mentally prepared to go in and put out hot spots; we didn’t realize that we’d be defending neighbourhoods and watching all these houses burn.

The big thing on our defensive line was structural triage – we were not leaving this spot; these houses were staying. We had a back-up plan if we had to bail – we had deck guns set up.

This one captain from Wood Buffalo . . . Archer, he had a house in Saprae Creek that burned and he was in charge of our line. The last time I saw him he was sitting on a lawn chair and his boys were sleeping; that was Thursday morning. We went and told him that it was one hell of a night and he just had this big grin on his face because he was happy we had saved that row of houses. I’d like to shake that man’s hand again.

A lot of times we did what we absolutely had to do in that moment to keep our guys going; it was chaos at times, but boots on the ground and on the attack lies it was organized and everybody did their best.