Today, changes in technological advancements in vehicles provide major challenges to rescuers and firefighters responding to motor-vehicle collisions that involve fire. Hybrid vehicles are the most prevalent examples. 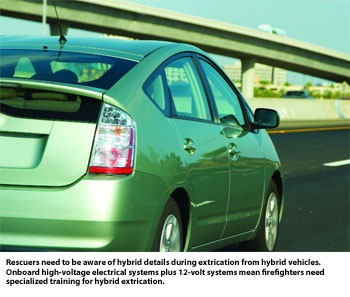 Vehicle recognition is an integral part of fire fighting and rescue operations during any motor-vehicle collision. Firefighters must know the relevant details of the type of vehicle involved. They must also be aware of the importance of locating the possible hazards and the safety systems that need to be identified before rescue and firefighting operations begin.

During size up, rescuers need to identify the vehicle and relay that information to the incident commander. They also need to share this information with EMS, police and even other firefighters on scene. This information transfer will make everyone aware of the potential hazards and help rescuers determine which manoeuvres are necessary and, therefore, their respective roles at the scene.

Stabilization locations for hybrid vehicles may differ from those for conventional makes and models, especially when there is still power to the vehicle. Rescuers need to be sure not to stabilize on any orange (high voltage) or blue (medium voltage) wires. Although these HV cables should be tucked up underneath far enough, rescuers still need to assess the body structure that they are going to stabilize before applying cribbing. While rescuers are considering stabilization options, other firefighters can block traffic and lay out a hose line. Typically, this will consist of one 38-millimetre charged hand line of about two or three 15-metre lengths.

Having stabilized the vehicle, rescuers need to gain access to it. First, the parking brake must be applied, the transmission put in park and the key removed and given to the incident commander. Giving the key to the IC will ensure that the vehicle power remains shut down. Following these simple steps could save a rescuer from being run over. If the vehicle were still under power, and in drive, and the accelerator were accidentally depressed, the vehicle would move forward. On the second generation Toyota Prius, rescuers must remove the electronic key fob from the electronic key slot, otherwise rescuers could accidentally depress the green button on the dash, which will start the car.

If the key cannot be removed, then the 12-volt battery must be disconnected. Key removal should become standard operating procedure for all motor vehicle accidents – not just for hybrids – to ensure safety of the vehicle and its occupants.

With all hybrid systems, the HV system will be automatically shut down during collision. In some cases, this is activated by means of an inertia switch. In other vehicles in which there is no electric motor turning, there cannot be any current flow. As rescuers work to stabilize the vehicle and then gain entry to access the key, other emergency responders will be discussing extrication techniques with the IC. Once an action plan is in place, rescuers must stick to it or modify it with a preconceived back-up plan if required.

A problem arises, however, when the vehicle is involved in any amount of fire, or when fire is thought to be imminent. So, what emergency procedures should responders take to suppress a hybrid vehicle fire? A fire involving a hybrid vehicle can be suppressed by following normal vehicle firefighting techniques and procedures. Usually, vehicle fires are located underneath the hood in the engine compartment or in the cabin of the vehicle. Copious amounts of water should be used and a safe angle of approach should be used when nearing the vehicle. Full protective clothing must be worn including SCBA. SCBA must be worn until the fire is extinguished. In fact, in some fire departments, SCBA must also be worn during overhaul due to the off-gassing of the interior materials that have burned. Interior synthetics can be carcinogenic.

Hybrid vehicle fires might involve more varied types and amounts of the same materials found in traditional vehicle fires, such as plastics, corrosives and metals.

When a hybrid vehicle is on fire, it can remain electrically charged and capable of self-propelled, unpredictable movement (if rescuers have been unable to remove the key).

Further, since there may be hazardous materials involved or near electrically charged systems, consider using the appropriate class of fire-fighting foam. Foam may also be required by department SOP. If there is flame directly on the battery cell, the fire is more difficult to fight because the HV battery is housed in a metal compartment. Toyota has a driver-side C-post battery vent through which the rescuer could apply water in hopes of it getting to the battery cell inside the metal container. Of course, this is provided that hand-line firefighters are able to locate and access the vent. If the fire were to become hot enough that the battery cell or the container begins to melt, thereby releasing the contents, the fire fighting and rescue operation may also become a low-level, hazardous-materials operation requiring more extensive resources.

Hybrid vehicles use NI-MH batteries to power their high-voltage components, although there is a trend toward experimentation with evolving battery technologies. If firefighters encounter the nickel metal hydride (Ni-MH) battery, after the extrication is completed, they should contact the nearest dealer of that make and model and have someone come out to dispose of the damaged battery. If there is no dealer in the area, firefighters may consider relying on their area hazmat team to take care of the battery. Ni-MH is a caustic alkaline that is damaging to human tissue. The electrolyte is absorbed in the battery’s cell plates and will not normally spill or leak even if the battery module is cracked.

A crash severe enough to breach both the metal battery case and the battery is rare. A few years ago, Transport Canada performed a series of crash tests of all the popular hybrid vehicles in an attempt to make the battery packs leak. Fortunately, the tests were unsuccessful. Despite this, emergency responders should always consider the possibility of
leakage before developing the incident action plan.

Fire departments that choose to clean up spills themselves must wear splash shields or safety goggles (helmets equipped with the face shields are not acceptable for acid or electrolyte spills), rubber, Latex or Nitrile gloves and rubber boots. The battery fluid, if spilled, can be neutralized with boric acid or vinegar or 5.5 ounces of boric acid per gallon of water. Boric acid and/or vinegar should be carried at least by hazardous materials teams, if not also by initial response apparatus.

Preparation checklist (prior to commencing extrication)

At this point, performing extrication evolutions on hybrid vehicles is no
different from doing so on any non-hybrid vehicle. All the glass can be removed before the roof is removed. While removing the roof of the vehicle, rescuers should check for the airbag deployment cylinders before cutting.

Mercedes Benz does not recommend cutting through an undeployed airbag, nor do Autoliv and TRG, the leading manufacturers of airbag systems. They feel that there is a potential to cut open a patient if the airbag has been cut through and then it deploys accidentally. This is because airbags are made from nylon and a cut edge can be razor sharp. When combined with high deployment speed there is a risk of further injury to the patient or rescuer. It is extremely important to strip the trim prior to performing a roof flap or removal to make sure you are cutting in a safe environment. Making mistakes like cutting through the airbag deployment cylinder may cause the cylinder to explode, sending shrapnel throughout the vehicle and potentially causing further injury. Rescuers must also account for the possibility that these components could be compromised when exposed to fire and/or high heat conditions, causing them to react unpredictably.

Some departments are keen on trenching a roof instead of roof removal. Their argument is that trenching a roof guarantees that rescuers will not interfere with the inflatable curtain-head protection system. Leaving the perimeter intact isn’t as easy as it sounds and there are still air-cylinder deployment devices in the rear of the roof line, as in the Audi A3 and the Land Rover Ranger (mid-ship). These cylinder locations are in the direct path of the trench cuts that the rescuer would likely make. Trenching also takes some planning as a rescuer must determine where to make cuts – interior or exterior – and choose the proper tool, such as a Milwaukee Sawz-all or an AJAX 911 air chisel.

Rescuers will likely find that the interior space of any vehicle is confined for yet another rescuer with a medic and patient, and you will need plenty of hard protection to cover both medic and patient. Performing a single-door removal or even a complete side removal evolution can be done safely on hybrids. There are no HV lines close to the outboard side of the vehicles, although this should be verified whenever the circumstances of collision increase the possibility of HV line dislodgement or decrease the distance between the HV line and the outer or stabilized portion of the vehicle. Generally the HV lines run about 18 inches inward underneath the chassis. If the collision is severe enough that it warrants a dash displacement, the same rules apply as those of non-hybrid vehicles: the cuts and spreads, or tool positions, will be exactly the same. If exposed orange or blue electrical line is visible, never try to disconnect or cut through them. Protect the patient and rescuers from further injury and maintain a nearby charged hose line for safety.

Combined rescue and fire fighting during motor vehicle accidents isn’t that common, which explains why firefighters rarely, if ever, train for it. Failing to train for possible, albeit unlikely, contingencies means unnecessarily accepting risk. Maybe next time you are performing your extrication practice, you might consider placing a Rescue Randy suited up in the front seat and lighting a fire in the trunk or back seat while simulating a rapid extrication under conditions of surrounding fire and leaking hazardous materials.

Wear your full PPE, with SCBA and have a safe and successful extrication.