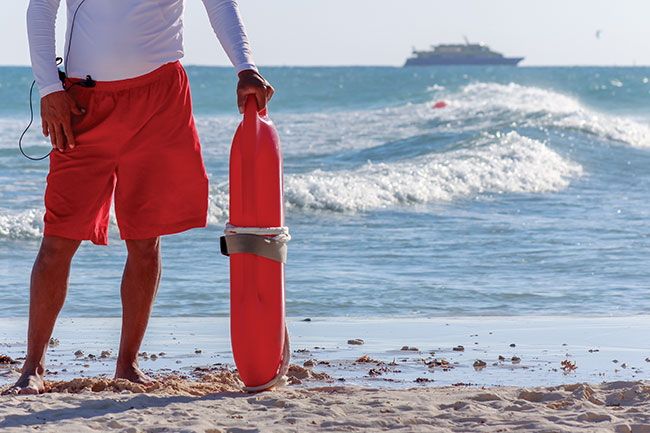 When you think of the branches within fire departments, you usually think of your suppression division, public education and inspections, training division and, if the organization is large enough to support one, apparatus maintenance. You don’t often find a beach rescue division within the fire service, but for several weekends this summer, I found myself working alongside the men and women of our beach rescue team who fall within our fire service organizational structure.

Due to the Covid-19 pandemic, our municipality stationed a team of firefighters on the beaches of Port Stanley, Ont., every weekend during the summer to assist with safety education. Other beaches in the province were forced to shut down as proper distancing could not be maintained We wanted to avoid this fate.

Rest assured, I was not pulling a David Hasselhoff impression and throwing the signature red lifeguard rescue buoy over my shoulder. Our role as firefighters assigned to the beach was to educate patrons on staying in their family or social bubble, maintaining their group numbers to less than 10 people and assisting with anything major that arose while we were on duty.

The town of Port Stanley usually has a population of 2,200 people. However, during a long weekend, it is not unheard of to see an influx of 5,000 to 10,000 beachgoers looking for some relaxing time on our blue flag status beach. I was impressed after getting an up-close, behind-the-scenes look at what this crew actually does in an eight-hour day.

After checking in at the beach office, we headed to the main tower to park the Rescue vehicle and meet the beach supervisor. After touching base on what would they need from us and operational functions, I then switched my radio over to their assigned channel. It wasn’t more than 20 minutes into our beach patrol that we heard the central tower call one of the four district towers to keep an eye on a pair of swimmers who looked to be in trouble. The lifeguards on that tower called back to the central supervisor and informed them they were aware and had eyes on those swimmers.

I wanted to get a closer look so we made our way to see if we could observe what was going on. With one simple command of ‘Tower 2 go’ from the central tower, the next several events looked like what I could describe as a lifeguard version of a response. Within seconds, two lifeguards had dismounted their tower and sprinted into the water going after a swimmer in distress, several other guards immediately showed up to provide support and staffing in case the second swimmer got into trouble.

As the lifeguards brought the young swimmer to the beach safely, everyone breathed a sigh of relief. As quickly as the guards arrived, they radioed back to the central tower that the situation was under control and ran back to their original assignments to relieved the crew who had ‘bumped-up’ to support them during the rescue.

Keep in mind these are college and university students. The average age group of the beach rescue was 19 to 25 years old. My summer jobs in college involved working on an auto assembly line or working in a warehouse.  Both important jobs, but I wasn’t exactly saving lives of total strangers like these young men and women were.

Over the course of my shifts on the beach, I got to witness the lifeguards enter the water several more times with successful outcomes bringing swimmers to shore. Lake Erie can be a beautiful lake, but it has been known to have strong waves on the north shore. I was extremely proud to work with that group over the course of the summer and, on a personal side, my family often visited that beach—my five-year-old loves the water. Knowing that this crew had such a vigilant and attention to detail approach to their positions as lifeguards, I honestly felt that my children’s safety was in great hands. It was certainly a pleasure to work with such a dedicated and professional staff and to see a behind-the-scenes look at the pressures and the skill of our beach rescue team.

Jason Clark has been a volunteer firefighter in southwestern Ontario since 2007. Having  made the transition from firefighter to captain, Jason has a new perspective on roles in the fire service and riding in the front seat. Contact Jason at jaceclark71@gmail.com or @jacejclark.