Senior fire officials and human resources professionals gathered to discuss labour challenges, diversity and changes to legislation at the Ontario Association of Fire Chiefs’ (OAFC) Labour Relations Seminar in January. The seminar was presented in partnership with labour and employment law firm Hicks Morley from Jan. 17-18 in Toronto. 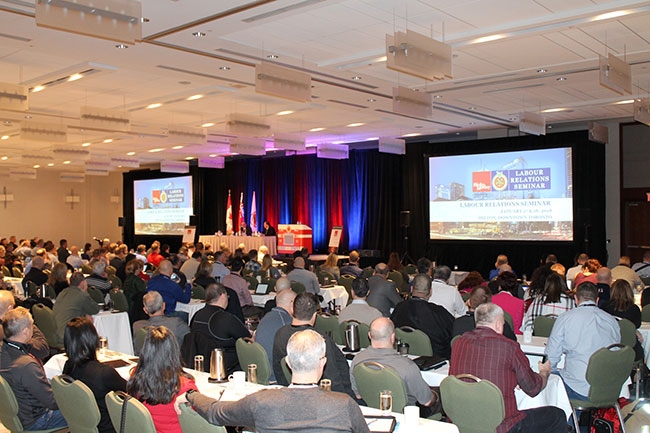 Every province in Canada was represented at the conference, said OAFC president Stephen Hernen when addressing the room during opening remarks on Jan. 17.

Hicks Morley’s Amanda Hunter explained new changes resulting from Bill 148, called the Fair Workplaces, Better Jobs Act, which was much contested by Ontario fire service leaders when it was initially released due to paid-on call provisions that would have seen costs rise dramatically for volunteer departments.

Hunter broke down the bill, explaining new changes, ranging from emergency personal leave to scheduling concerns for on-call workers. She said there is a “three-hour rule” that requires employers to pay employees for three hours of work when they are on call, unless they are on call to provide an essential public service – like fire fighting. On-call firefighters will not be paid for being on call if they do not need to respond (like in the case of volunteer firefighters who are only compensated if they choose to respond to a call), however, if they do answer a call that takes under three hours, they will be paid for three hours of work.

At the time of the seminar, Hunter said there are no scheduling provisions for fire chiefs, who are often expected to be on-call 24-7.

The legislation states that if a first responder is diagnosed with PTSD then it is assumed to be a work-related occupational injury that would make them eligible for WSIB benefits and supports. On Jan. 1, chronic mental stress was also added to the legislation.

Lawyers Michael Kennedy and Allison E. MacIsaac gave a presentation on legislative changes and recent arbitrations that looked at cases from fire services across Canada. Keynote speaker Lisa Mattam of The Mattam Group, a consulting firm that advises organizations on issues of leadership and diversity, spoke to officials about challenging unconscious bias.

Mattam said that everyone is inherently biased, which she said is a natural human trait – but leaders must learn to overcome bias so they do not subconsciously overlook quality employees.

She discussed ways that community leaders can challenge their biases, like having a diverse panel of interviewers when hiring and omitting names from the top of resumes during initial selection to focus on the skills over the person.

Changes to the annual OAFC Conference and Trade Show
The OAFC is making changes to its annual conference and trade show based on member feedback from the last two years. The event will be held in Toronto on May 3-6, with adjustments to the event format and length to better serve the interests of members.

The Trade Show will now be held at the International Centre to allow for more space and a more interactive experience. The conference programs and accommodations will be at the Delta Toronto Airport Hotel & Conference Centre.

This year, the OAFC general meeting, including elections, is being moved to November during the 2018 Midterm Meeting.