Your mother is upset with us,” my husband told my older daughter as he drove her to school one Monday morning after I had experienced a bit of a meltdown. 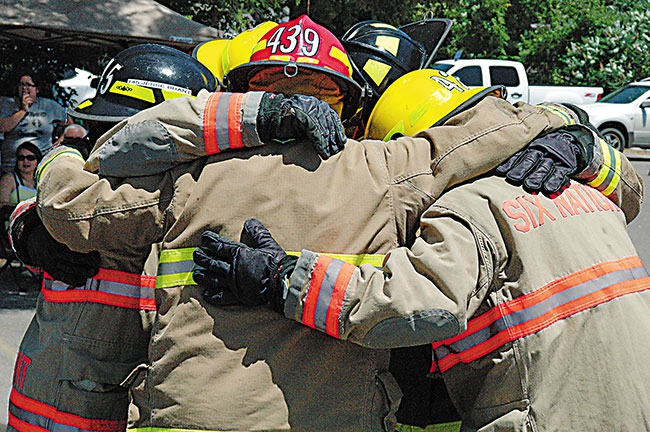 Being in the fire service means being part of a family

“Why?” my daughter asked with the blissful ignorance of a 15-year-old.

“But we’re family. That’s what families do,” she replied, dumbfounded.

When my husband relayed the conversation to me later that day, I couldn’t help but laugh, mostly at myself for taking everything so seriously, but also at my daughter for making it all seem so ordinary, everyday, no big deal, as only a teenager can.

The cause of my little meltdown was me thinking that I am, as I said to my husband, “the hub of the wheel that is this family.” It was not so much the arguing, that is just the one thing my husband remembered from my list of complaints – and my daughter was right, that is what families do – it was more a mindset that I have to keep everyone happy and hold it all together. I have come to realize that thinking that you are the one holding everything together means that you are likely doing just the opposite.

Family – the one at home and the one in the fire hall – is a team, and we all know that there is no I in team. I am sure we all like to think of ourselves as the type of person that gets things done, or makes things happen, or has the answer or solution to whatever problem is before us. The fire service attracts that type of personality; it is what we pride ourselves on – the ability to answer the call and make things better.

But here is the kicker: no one can do it alone. Even firefighters who have to respond to a medical call alone have the paramedics to back them up. They still have a team.

Everything we do is a team effort, whether it is in the fire hall or at home, and if it is not a team effort, then you need to ask yourself why. Do you feel like you are the hub of the wheel in your fire hall, like I did at home, unbeknownst to my husband until I told him how I was feeling? He probably thought he was the hub.

With me thinking that I was responsible for everyone getting along, the housework being done, and feeding the dogs, in addition to working full time and responding to fire calls, what I didn’t think to do was ask for help, or to take a break, until the wheel broke, that is. Then everyone avoided me like the plague for the next 24 hours.

The bonds we share in the fire service have been created and strengthened by working together, training together, and spending down time together. We recognize that we are part of a team, and we are only as strong as our weakest member (which in my house happened to be me that day). It is up to each one of us to keep our teams strong and cohesive.

In just a few weeks, our department had a firefighter’s wife fall and break her femur, another firefighter suffer a stroke, and a third firefighter lose his father suddenly. These incidents occurred outside of the fire hall, but affected our team as much as any call.

So what do we do? We pull together like any good team and dog sit, plough driveways, send condolences and flowers and check in regularly by phone or by text just to let them know we are there if they need anything. Maybe we even take them out for dinner or a coffee to chat.

When someone is sick at home, everyone else pitches in to help take care of things. When something happens to a team member in the fire hall, the same thing goes. However, the reverse is also true. When you need a hand, all you have to do is ask. That’s what being part of a team is all about.

Instead of struggling with the laundry or vacuuming the dog hair, all while also trying to meet the deadline for this column, lightening the load is as easy as asking for help.

Looking out for each other – at home, in the fire hall, and outside of the fire hall – makes a good team even better.

Jennifer Grigg has been a volunteer with the Township of Georgian Bay Fire Department in Ontario since 1997. jhook0312@yahoo.ca @georgianbayjen
Print this page