Michael Laughlin knows about perseverance. The 37-year-old overcame a horrific snowmobile accident in 2007 that resulted in 33 pins and screws holding his left side together, including a titanium forearm, femur and kneecap. 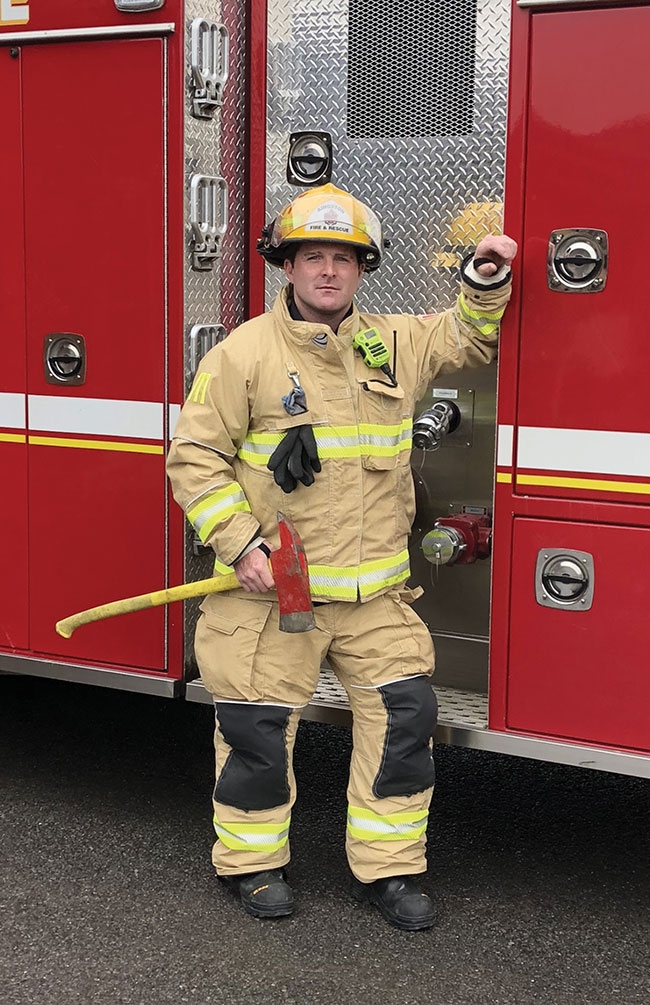 Fortunately, he made a full recovery. Then, in 2011, his girlfriend of four years passed away due to suicide – a trauma that he says was more painful than any physical injury could ever be.

“The mental and emotional pain is way worse and it takes a long time to get past something like that,” Laughlin says.

As he persevered through these physical and emotional trials, he had no idea that the fight of his life was still to come. A firefighter with Kingston Fire and Rescue in Ontario for the last 18 years, Laughlin joined the fire department after his hockey career came to an end.

“I had five buddies who went to the NHL and I realized that I didn’t have it, so I wanted to be a firefighter because it’s very similar,” he explains. “When you’re hanging out with the guys doing your thing, it’s like being in the dressing room. When you get that call, it’s all business. You’re going out as a team to put that fire out.”

Little did Laughlin know that in the near future, this team of fellow firefighters would jump into action to save his life. On June 6, 2016, Laughlin fired up his motorcycle for a scenic summer drive down a country road just north of Kingston. He was cruising at 60 kilometres per hour, enjoying the ride, when a deer jumped out of the ditch and ran into the side of his bike, launching it into a speed wobble. He regained control and looked up just in time to see a 90-degree turn in the road ahead.

“I was bending the bike as hard as I could, but the gravel made the bike shoot out from under me,” Laughlin recalls.

As he and the bike careened out of control, his main thought was to protect his head.

“I tried to sit up and ride it out on my butt, but I found out later that when I did that I broke my back and neck when I bounced off the road. My leg got caught on a rock and snapped it right off at the knee.”

He skidded into the ditch with the bike landing on top of him. The sudden silence was deafening.

“I thought, ‘Oh my God, I just killed myself.’ But I was going to fight it to the end. I didn’t want to die. The bike was on me halfway up my chest and I realized my leg was holding on by a little bit of skin. My ankle bone was showing and my tibia was sticking through my skin.”

Laughlin’s training kicked in. He pulled his belt out from his jeans and made a tourniquet for his leg. Then he checked his cellphone and, incredibly, it was still in working order.

“I phoned my fire department dispatch because I know that 911 takes a few transfers and my dispatch I could get through to right away. I said, ‘I’m dying in a ditch, my leg’s ripped off. Come out and save me.’ It took 15 minutes because I was so far out of the city.”

The sound of a car driving by, unaware of the carnage that lay in the ditch below, made Laughlin realize that nobody could see him from the road above. He threw his helmet and bike parts up onto the road to get noticed. It worked. A neighbour who had heard Laughlin yelling was able to locate him, but the perilous scene was overwhelming.

“He went into shock, so I gave him a job to go get some more rope so I could redo my tourniquet,” Laughlin explains. “I was able to keep control and not go into shock myself, which is a big thing because if you go into shock you can’t do anything to help yourself.”

A volunteer firefighter was next on the scene and sat with Laughlin to comfort him. The sirens were in quick succession after that. With the arrival of the firetrucks and ambulance, Laughlin knew he was in good hands and the remaining events blurred together.

“I’m used to being the one packaging someone, but all of a sudden I was the one being packaged. I remember them cutting my clothes off and saying they were going to straighten my leg as they put me on the board. I was ready for unbelievable pain, but when they did it I didn’t feel a thing and I realized my leg was basically severed.”

As the ambulance pulled into Kingston General Hospital, around 20 fellow firefighters were waiting for his arrival. Worried for their friend and co-worker, many had overheard Laughlin’s 15-minute call with the dispatcher as he lay in the ditch waiting for help.

Laughlin’s fire chief, Chief Shawn Armstrong, spoke words of hope to Laughlin just prior to doctors putting him into a medically-induced coma due to intense pain.

“Chief Armstrong came over and said, ‘Listen Mike, you have nothing to worry about. Your job will be here waiting for you.’ My biggest concern was losing my job. We love our jobs so much and wouldn’t trade it for anything. So that was a big deal to me. That just motivated me even more.”

When Laughlin regained consciousness eight days later, he had already been through four surgeries. Doctors had fused together two of his vertebrae, put two eight-inch rods in his spine, and reattached his right leg. Unfortunately, the reattachment didn’t take and it became apparent that his leg needed to be amputated.

The first amputation occurred just below the knee, but after a few days a further amputation above the kneecap was required. Adding to the litany of injuries was a fractured neck and two broken ribs.

“I wanted to get back to doing what I used to do, so the amputation was my best bet,” says Laughlin. “I said, ‘Yep, let’s do it.’ An hour or two later my dad and I were on my iPad looking at prosthetics. There wasn’t much of a grieving process for me. That was what I was dealing with, so I wanted to move on and get it fixed.”

Laughlin remained in the hospital for one month, then moved into St. Mary’s Rehabilitation Hospital, where he “learned how to be an amputee every day and got back on my foot a little bit,” he laughs. “Your stump needs to heal and then it shrinks, loses its muscle and then gets to the size where you can wear your prosthetic properly. I was very impatient and just wanted to get back to my life.”

Approximately five months following his accident, Laughlin returned to light duty. During this time, he connected with the first North American above-knee amputee firefighter, Brandon Anderson, from the United States. Remarkably, Anderson and Laughlin both had motorcycle accidents within one month of each other, both requiring an amputation. The two quickly formed a friendship. Anderson had made it back to full-time firefighting duties and was able to help Laughlin navigate these final steps.

“Here he was, a full-time firefighter who had made it back to work and that was motivating for me,” Laughlin says.

Laughlin began working out at the gym daily and got a state-of-the-art prosthetic called the Ottobock X3. Worth $120,000, this one-of-a-kind prosthetic attaches with a silicone membrane and pin system, and has a computer inside that remembers Laughlin’s gait and stride, allowing him to conquer stairs easily. The leg has to be charged every five days and Laughlin has two, storing one in his bunker gear for when a call comes in. He has also added a running blade to his collection and is having a skate custom-made so he can get back on the ice.

Gratitude is what sums up his outlook on life. Laughlin is newly engaged to a palliative care nurse whom he met during his time at St. Mary’s and is back at the job he loves. In his spare time, he goes to the hospital and talks with patients who have recently lost limbs or are about to undergo an amputation.

“I want to help people and inspire them,” he says.

In sharing his story, he has done both.

Related
Fit for Duty: October 2018
Back to basics July 2017: Making a mayday call
Timbits: A heads-up method for getting down low
The danger within: The importance of tracking firefighter biometrics