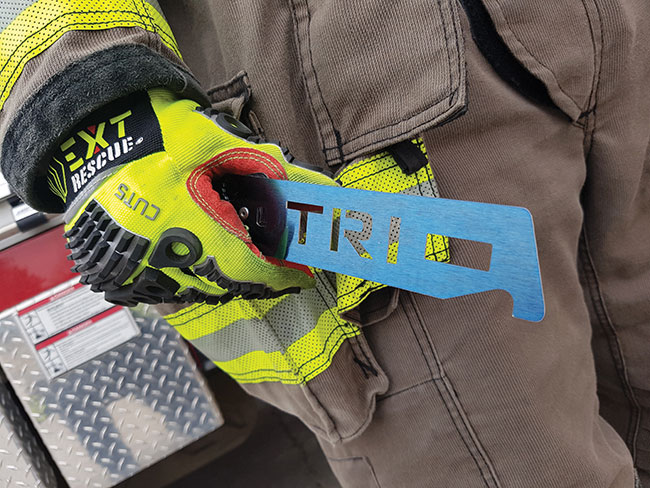 Tri-Blade11: The tool weighs about 100 grams and is easy to carry.

An Ontario firefighter has developed a compact and lightweight, multi-tool that will, among other things, help first responders quickly gain entry through various locks and doors using a respectful approach.

The tool, called the Tri-Blade, is a high-alloy, nine-function multi-tool, comprised of the various hand tools that tend to clutter the pockets of firefighters. It was designed to reduce the amount of gear and weight that firefighters carry on their person while maintaining the level of readiness the job requires.

The tool was developed by Derek Cavaliere, who’s been a full-time firefighter in southern Ontario for three years.

Cavaliere came up with the idea after responding to countless medical calls, as well as standard alarm calls, some during the early-morning hours. Use of force is not typically warranted on calls of this nature – no clear signs of danger to lives/property. This would result in having to wait on scene because a door he needed to go through was locked.

“We’d have to wait for a keyholder to show, which could take a while,” he says. “I generally would try to make entry while we waited, with about 20 per cent success.”

He had searched for a compact tool he could always carry with him, but had no luck.

Seeing a need for a solution to better serve the community, a light bulb clicked on.

“I decided to make my own,” said Cavaliere.

After many prototypes and testing, he refined the design and function to the present version of the Tri-Blade.

“What I wanted was a lightweight, compact tool that offered me options,” he says. “I incorporated a handful of tools I used to carry in my turnout gear pockets, and added new functions that weren’t previously available.”

Cavaliere decided to optimize the tool for production. It is now being professionally manufactured in Canada.

Cavaliere says no single tool on the market can open every door lock that a firefighter might encounter. With practise, along with an understanding of the various locks available, the Tri-Blade can help as a means of gaining access to many locked or restricted areas as efficiently and respectfully as possible.

The tool has many features that Cavaliere said he finds very effective at a fire scene, such as the latch wedge blade that allows firefighters to manipulate latches protected behind security plates. A modified shove knife, 8 and 10-millimetre 12 point wrenches used for battery removal at MVC’s, a TTL tip used to manipulate lock mechanisms as well as reset pull stations, a window punch, serrated edge, O2 cylinder wrench and residential gas shut-off wrench.

The tool weighs about 100 grams and the stored size is 1.5-by-6.75-inches. It is about one-tenth-of-an-inch thick, making it easy to carry behind a radio or in any pocket.

The tool is now being sold worldwide. For more information, go to www.intothesmoke.ca.

Grant Cameron is a freelance journalist and communications professional who operates GAC Media Group in Burlington, Ont., which provides writing, editing and media relations services. He can be reached at gacmediagroup@gmail.com.