All firefighters should be physically ready for duty. Most departments, career and volunteer, require recruits to pass a physical test. This column is directed at those who are preparing for recruitment, but the content also applies to firefighters who wish to remain prepared for the physical demands of their jobs. 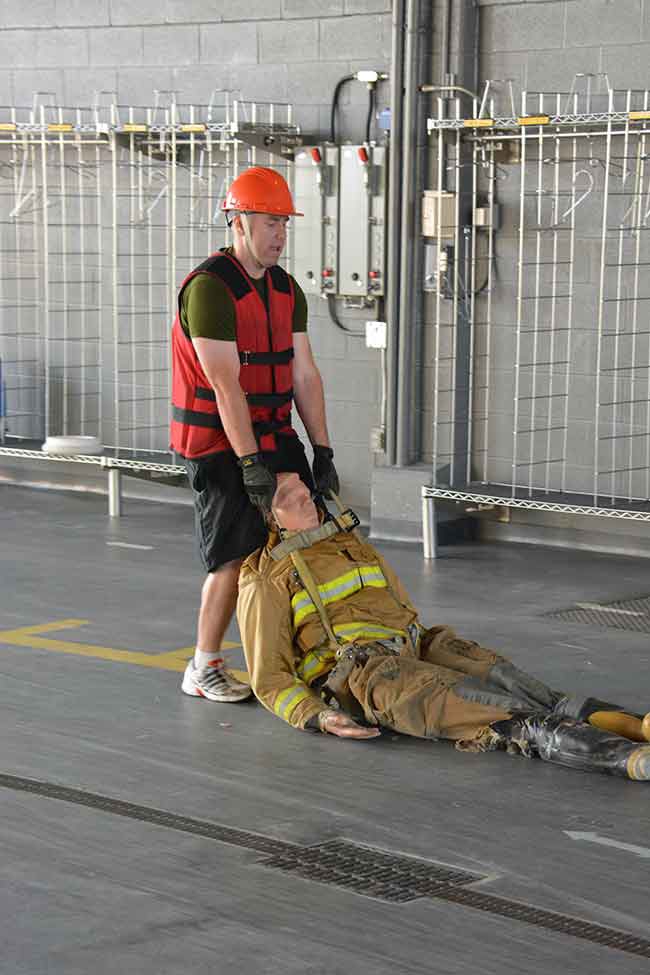 Candidates are encouraged to mimic the physical testing as closely as possible and thoroughly train well in advance of the test date. All firefighters

Halifax Regional Fire & Emergency held its first career recruitment in more than eight years in January and received more than 2,100 applications. A physical test was part of the process for the top 150 candidates who passed the aptitude test. There are generally two facets to a physical test: cardiovascular and strength/endurance.

How you prepare for testing depends on your current level of fitness and experience handling the testing equipment. Every department or agency, such as Ontario’s standardized candidate testing service, clearly outlines the testing process in its recruitment information package or online, and there are many other resources available. A candidate’s success largely depends on his or her preparation.

Cardiovascular testing
The VO2 max is a measure of the maximum volume of oxygen a person uses. Some departments use a technical process in which applicants walk/run on a treadmill while their cardiac outputs and oxygen consumptions are monitored; other departments use the beep tests/shuttle runs or even timed runs. Cardiovascular fitness testing rarely factors in age or gender, but rather the physical needs of fire fighting.

To prepare for a VO2 or cardio test, understand what is involved in the test and your current cardio conditioning. These tests can be daunting if you don’t do some form of cardio training. We see a lot of people come through testing ill prepared. You have to train. You can’t just show up.

Treadmill testing includes adjusted speeds and slopes to increase demand. Incorporate into your training some kind of hill or grade running/jogging. If the test is done with weighted gear, mimic the conditions by wearing a weighted vest or practise in gear.

If the shuttle run/beep test is part of the process, get used to the cadence and the turn-around. Do not condition yourself by running a straight line if you are being tested on running back and forth. Many people find the timing of shuttles difficult and tend to over run, while others struggle with the agility required to change direction. The best way to prepare is to practise this test, not just once, but over an over.

Interval training, such as 30/30 and Tabata, is an excellent way to improve cardio, but also incorporate some kind of short-distance running. If your testing is expected to last eight to 10 minutes at 10 kilometres per hour, you must duplicate that in training. Information on timing and speed for each type of testing is available on the Internet, and downloading fitness apps can help you practice.

Strength/endurance testing
The strength and endurance portion of physical testing varies and can include the Candidate Physical Abilities Test (CPAT), Gledhill Fitness Protocol or York University Firefighter Fitness Assessment. All tests determine a candidate’s ability to perform specific firefighting tasks and require a good base level of fitness. Most tests require the candidate to wear weighted vests or firefighting equipment weighing up to 34 kilograms (75 pounds) while performing activities such as pulling a sled, dragging a dummy, hoisting, forcible entry and climbing. The test activities are not supposed to be easy, but they are absolutely achievable with preparation.

Most tests clearly outline each skill you will need to perform, the weight of the equipment, distance to travel and times needed to complete each event. However, if a department or agency is ranking performances, candidates should aim to perform better than their competitors. Technique, overall strength and endurance all play important roles. If you don’t have access to the actual test, mimic each skill as closely as possible and ask those who have already done testing to help you.

Technique is often the key to forcible entry and rope pulls, so make sure you work on the small skills such as grip strength. Unless you have great upper-body strength, core conditioning and lower-body utilization are important for pulling and swinging skills. Add rotational training to your workout so you can activate your whole body while performing these skills.

Don’t forget to warm up before you are tested. Calming your nerves will help you prepare your body and put you in the right frame of mind. If you have put the time and effort into preparing for these types of tests you will be successful. Train hard, work hard and give everything you have on the test floor. Good luck and be safe.

Sherry Dean is a career firefighter/engineer with Halifax Regional Fire & Emergency. She has more than 20 years of experience in fitness and training. deansherry@bellaliant.net