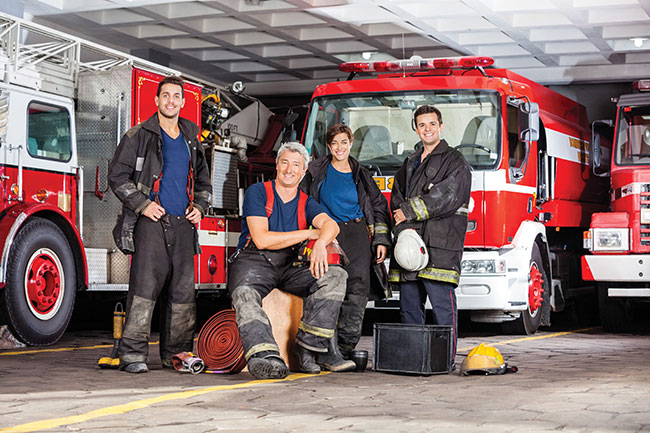 Although human resources and promotions might not be a part of our job description, and might not have anything to do with us as front-line fire officers, team building and making our crews the strongest possible is one of our jobs. Photo credit: © Tyler Olson / Adobe Stock.

When we first join the fire service, one of the last things that crosses our mind is retirement or leaving the department. I haven’t looked at hanging my gear up just yet and haven’t even begun to think about the ‘final approach phase’. The thought of leaving the ‘front seat’ or moving forward in the ranks also hasn’t been something that I have considered or even needed to. I still enjoy being directly involved with my team as a captain and getting hands on with bringing a scene to a stable outcome. I think I have another 20 years in me, if the body can keep up to the younger recruits replacing the ranks every year.

Although human resources and promotions might not be a part of our job description, and might not have anything to do with us as front-line fire officers, team building and making our crews the strongest possible is one of our jobs.

So, what happens when you walk out of the station for the final time? I know there is going to be a couple schools of thought here. They could think ‘who cares’ what happens when they quit or retire from a job. It isn’t their problem or responsibility anymore.

I am more of a ‘leave the place better than you found it’ type of person. We all know fire fighting can be inherently dangerous. In the world of on-call, paid, volunteer, professional or whatever group you are a part of, it all can be dangerous no matter how much money you are paid to be a firefighter. I want every member who joins the fire service under my supervision to have a full rewarding experience with the job of being a firefighter, and be safe and healthy.

Here is another reason I have for wanting to leave my station better than I found it: my family and close friends all live in my station’s first response area. I would like the crew members on that responding truck to have an ‘all in’ attitude and take the job seriously.

I’ve come to the point in my world of fire fighting to start thinking about who is going to be promoted over the next period. Who will be leading the next generation of fire fighting? Are we doing everything we can do to get them ready? These decisions might not come up for the few years, but we need to have strong practices to provide our next leaders with the tools they need to do the job.

Formal training is a great start. When members of the fire service continue with their education, and put in the learning hours, we see great things in return.  When we give them more responsibility and allow those members to make decisions without micromanaging their actions, we can see a more confident firefighter. Training and education are a great base to equip firefighters for making real world decisions on the fire ground.

The fire service, in general, is an apprentice program. When you think of someone who successfully apprentices within the organization, you think of what you have invested in them and if everything works out, you would want to keep that person for as long as possible. We are constantly building a team to do extraordinary things.

Some things I keep in mind with new recruits is that the biggest vehicle they might have driven, prior to joining the fire service, might have been their parent’s pick-up truck. Probably the most shocking thing that they’ve seen was in a movie.

The fire service is asking a lot from them, and these future firefighters might think they are ready for it. If they are willing to show up, that’s a start. I like new recruits to be involved and ask a lot of questions so I can see their thought process. If they continue to strive to be better through training and education that’s a huge bonus. If they work hard to not only to continue to make themselves better, but also make their surroundings a better place to work in, not only do I want them on my crew, I want them eyeing up my job.

Jason Clark has been a volunteer firefighter in southwestern Ontario since 2007. Having made the transition from firefighter to captain, Jason shares perspective on roles in the fire service and riding in the front seat. Contact Jason at jaceclark71@gmail.com or   @jacejclark.