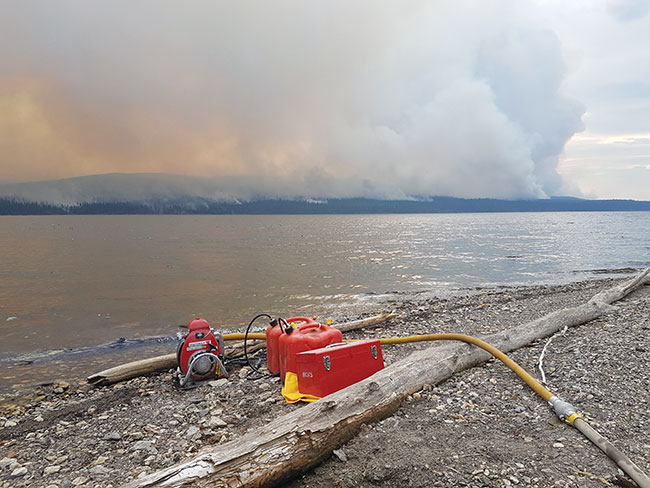 An element of the Ministry of Forests, Lands, Natural Resource Operations and Rural Development, the BC Wildfire Service (BCWS) is the wildfire suppression service in British Columbia. The BCWS employs about 1,600 seasonal personnel each year, including firefighters and dispatchers, among other seasonal positions.

Q: What does your role with the BC Wildfire Service entail?

A: I always tell people that being a planning section chief is like being the centre of an hourglass. All the information, data and intelligence that comes from the fire line goes through us and then we disseminate that information out to where it needs to go. Whether that’s keeping track of the number of people working on the fire, mapping, photos ­— all the filing comes through us. We’re also the ones who create the incident action plan. That’s the plan that all the firefighters on the ground use to meet the objective of whatever the incident may be.

Q: Canada has seen record-breaking wildfire seasons over the last few years. What have been the biggest challenges in dealing with the wildfires?

A: The biggest challenge we’ve seen are the effects of the mountain pine beetle. The affected forests have now changed from mostly standing dead trees to large areas of blowdown. In some cases, the trees are piled up three to four metres in height and it is completely unsafe to send people into these areas to put out the small fires when the burning conditions are in high to extreme conditions. The volume of fuel on the ground has made the fires that do get going in these areas extremely volatile and hard to control. The strategies and tactics we are having to use are very different than traditional methods. We use more heavy equipment, more water and more people to put these fires out. This taxes the resources we have available and we end up falling back to areas where we can attack these fires in more open terrain, or we use natural barriers to slow or stop fires burning in this fuel type. This has been a significant change compared to fire fighting 10 years ago in the same areas where the affected trees were still standing or under attack from the pine beetle.

Q: What lessons have you learned? Is there anything that would surprise people about the BCWS?

A: We’ve learned to do more burning both during fire season and on the shoulder season — to do hazard reduction burns and getting the buy in from the general public, the stakeholders and First Nations people. In some places they want us to do more but there’s only so much time and manpower available. It’s a real challenge because sometimes there are more areas that we could and want do the work on but we can’t due to lack of resources.

Q: What sort of positions are there in the BC Wildfire Service?

A: There are almost 150 different positions in the BC Wildfire Service that we do that people don’t always realize are fire fighting positions. New people usually start on a crew. After a few years, based on their education, people sometimes transition into other roles within our organization. There are operational people who go out on the ground and actually fight the fire and then there are planners who work in an office. We have people who worked in prescribed fire, people involved with safety, aviation, prevention, operations, wildfire prevention and enforcement, weather forecasters, communications specialists, and then we have people involved in finance and admin side of things. We also feed a lot of our people into fire departments around the province. We’re actually like the farm team for municipal fire departments, RCMP, city police. So there are actually a lot of people who came from the BC Wildfire Service who work in fire departments or with the police force now.

Q: Is there anything that you think a firefighter who works at a department may be interested to know?

A: If they haven’t worked with us, I think a lot of people would be surprised to know that wildland fires are always fought the same way. They’ve been fought the same way for over 100 years and I don’t see it changing in the future. It’s all about the basic fire triangle. If you take away one side of the fire triangle, you stop the spread of the fire. One of the things that structural fire departments find challenging when they work with us is that we’re okay with letting a fire get bigger. We don’t rush to spray water on it to put it out, we sometimes let it burn to natural barriers or to man-made barriers like a paved road because we know it’s not going to cross the road. We let it burn to those areas so we know we won’t have another fire there for the rest of the season because of the burned grass.

Q: In your role, you predict what will happen with the fire and where it will spread. Does this include deciding when to let it burn?

A: As a planning chief, it definitely is and we usually make that decision when dealing with larger scale fires. You have to consider the weather forecast, the topography, the fuels, how the fire is reacting on the landscape, and then try to predict where the fire is going to go and how quickly it’s going to get there. The reason we do that is for firefighter and public safety. It’s not just about knowing what resources we’re going to need. We’re aware of what strategies and tactics we need to use to try to stop the fire but it’s not just science, there’s some art and experience to it too. For example, if we know the fire is going to make a significant run the next day because there’s a big wind event coming in, we’re going to prepare for that and we’re not going to put people in front of the fire. It’s all about knowing and understanding how fire behaves and what fire can do. Of course, there are times where I’ve been completely wrong and there are times when I’ve been completely right.

Q: How has the wildland firefighting changed over the course of your career with the BC Wildfire Service?

A: The fundamental way we fight fires is the same but I would say our command and control organization is much better now. We utilize people with specialized skills and abilities to do certain roles and that allows us to be more effective on a fire because we’ve realized that it’s not just about putting the fire out. There is the planning side and there are a lot of strategies and tactics that, with climate change and with the growth of the urban interface and the values on the landscape, are different than they used to be. I think that has really changed how we have to look at a fire as a whole. It’s not just wildland fires that you’re fighting anymore. Sometimes you’re protecting cultural values, you’re protecting somebody’s home and there’s more significant wildlife values nowadays. There’s different parts to a fire now that you have to think about, so having specialized resources has really changed how we fight a large-scale incident today.

Editor’s note: This interview has been edited for length and clarity.