Professionals from police, security and fire protective services gathered at the Universal Eventspace in Vaughan, Ont., to welcome new and prospective talent into their fields at the 2022 Security • Police • Fire Career Expo.

Students from Ontario colleges like Seneca and Durham attended the full-day event on Tuesday, May 10.

“To be a police officer is my goal,” said Mimoza Kaci, a graduate from the Canadian Business College’s Police Foundations program, who attended the expo with a group of friends. “In Toronto, we have many problems especially with mental health and communication to deal with these people and help their communities,” she said.

Once all exhibitors set up their booths and career candidates found their seats in the auditorium, Harold Wax, Global Security Director at Pepsi Co., delivered a keynote presentation. 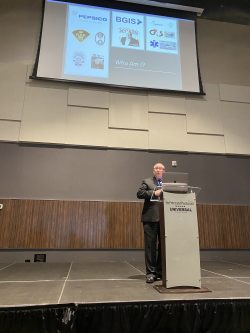 Wax began his career as a part-time paramedic who took on a guard position with a small cash insurance company that would later become part of GardaWorld.

In his role as a security guard, Wax took advice from a senior level professional and worked hard to make himself valuable to the company in his pursuit of a career in corporate security.

“I went from driving an armoured truck to delivering cash for banks to servicing ATM machines,” said Wax, who would eventually receive an offer with the corporate security team and continue his climb for new heights from that time.

Towards the end of his presentation, Wax distinguished between the role of a mentor and that of a champion for career development purposes. He wanted the young audience to know that while mentors can offer great advice, it is champions who vouch for candidates in their absence and help to open doors.

In the afternoon three students volunteered to participate in the “Get hired panel and mock interviews” before the crowd at Career Expo. 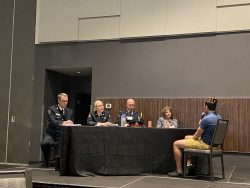 Each of the panelists shared specific insights into how candidates can perform optimally in future job interviews for careers in fire services, police or security.

“Buy yourself 30 seconds to collect your thoughts,” she said.

The second and third items are a notepad and paper as often times interviews for careers in fire, police and security involve multi-part questions which require sequential, well-thought out answers for success.