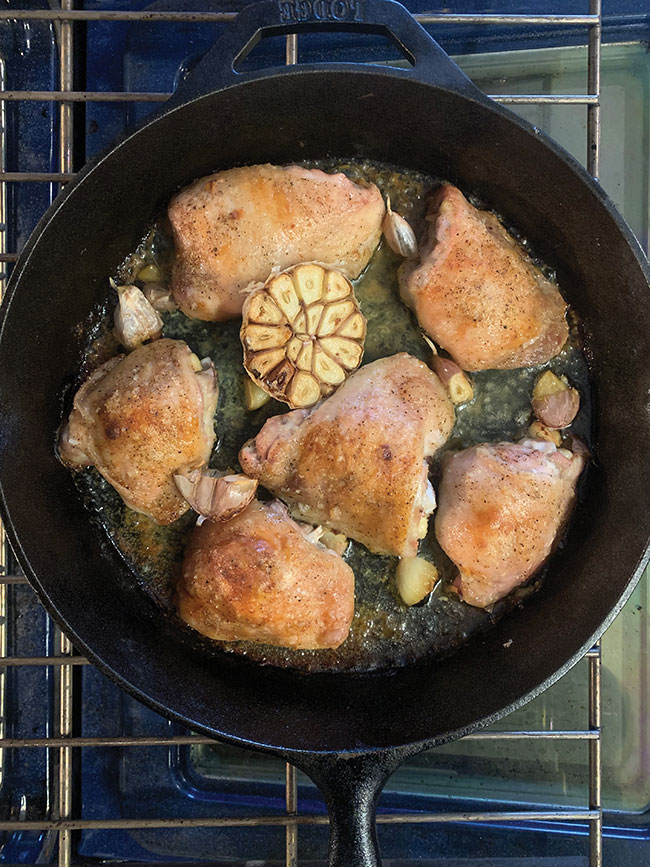 Every interview or television appearance I’ve had usually starts out with the same question: “How did you ever get into cooking?” For me it’s quite simple, I was born into a large French Canadian family who lives and breaths everything food, who loves to eat and finds great joy in the kitchen together. I always thought everyone lives to eat and relishes in the cooking experience. Turns out some people just eat to survive and will only cook out of necessity. I know, unfathomable! I have always felt at home in the kitchen, but now I understand that is not the case for all. When I was teaching cooking classes, if an individual had no experience in the kitchen, I would always tell them, “If you can read, you can cook!” Surely you can find and follow a recipe that sounds good to you. There is a recipe out there for everyone. Name a cuisine, any ingredient, any skill level and you will be able to find endless examples and recipes in cookbooks and online. But what happens when a recipe doesn’t quite turn out? (And it does happen a lot). A flat cake, a bland soup, over-cooked meat, soggy vegetables, a dry loaf of bread…when a recipe doesn’t turn out as expected, we feel the disappointment to our very core. Our instinct is to blame either the recipe itself or our own inferior cooking skills, but very often it’s neither. Certainly, recipes sometimes do have errors. I’ve written a cookbook and the process isn’t always so easy. I am far from perfect. But when we have a recipe fail or talk to other people about their recipe failures, it more than often will come down to one, or some of these reasons.

• The oven temperature is off. Even if you only use your oven occasionally, picking up an oven thermometer is a worthwhile investment. Ovens are often several degrees warmer or cooler than the numbers on the dial and having an oven thermometer means you know exactly how much to adjust the oven to compensate. When baking, which is more of an exact science, precise temperature is key.

• Ingredient substitutions. Going off-recipe is fun and one of my favorite creative parts of the cooking process, but it also requires a little more due diligence and expertise on our part to understand how the additional or substitute ingredient will affect the recipe. For instance, cutting the sugar in a cupcake or substituting a tenderloin for a chuck roast in a braise will give you very different results than the recipe author intended. Try a recipe once as it was intended by the author and then make it your own with any substitutions or add-ons during the next cook.

• Equipment substitutions. If the recipe says to use an eight-inch pan or a cast-iron skillet, there’s probably a good reason for it. That doesn’t mean we can’t substitute something else in its place, but we just need to understand that our dish might turn out differently.

• Adjusting the cooking time. Recipes are often written with the expectation that you’re following along. If you pause in the middle of making a cake and come back to it an hour later, some chemical reactions might have taken place that the recipe didn’t intend because it thought the cake would go right in the oven. Same goes for shortening the cooking time, like the time for bread to rise or a roast to cook. The result will likely be different. As with the ingredient and equipment substitutions, it’s not that you can’t adjust the cooking time. You just need to think it through first.

• Trust your own judgment. Recipes (and the people who write them, like me) aren’t fail-proof and they also can’t take into consideration every variable in your kitchen, like how cold your eggs are or how strong your whisking arm is. Just because a recipe says to cook something for 15 minutes, you should use your judgment if it’s not quite done yet or starts to burn at the 13-minute mark.

A failed dish is a disappointment, but every time a recipe doesn’t come out quite the way we expected, it’s also an opportunity to learn something. Grab that recipe and try it again!

In talking about recipe fails, I’m sharing one of my “foolproof” favourites. Eat well and be safe.

Arrange a rack in the center of your oven and preheat to 425 F. Cut one lemon in half crosswise and remove any visible seeds. Cut one head of garlic in half crosswise.  Melt a half stick butter in a small saucepan or microwave..With chicken thighs skin facing up season every surface of chicken with lots of salt and pepper. Drizzle chicken all over with melted butter and transfer to oven.

Roast until chicken is nicely browned and cooked through, checking for doneness after 25 minutes. To check, carefully remove skillet from oven, poke with a knife and pierce the meat. If juices run clear, the chicken is done. If you see a rosy pink color, it needs more time. Continue to roast, checking every five minutes, until juices run clear. Chicken is done at an internal temp of 165 F.

Let chicken rest in skillet at least five minutes as this will help the juices in the meat to settle. Transfer chicken to a platter and pour all those glorious, buttery pan juices over top of the meat and serve with roasted lemon and garlic alongside. Yum!

Patrick Mathieu is an acting captain at Waterloo Fire Rescue in Ontario. He was featured on Food Network’s Chopped Canada. Contact Patrick at stationhousecateringco@yahoo.ca or   @StationHouseCCo.