The phone rings in your fire chief’s office with news that  one of the department’s members has passed away suddenly; it is a line of duty death (LODD). With a sinking heart and eyes full of tears, the chief mourns the loss of one of his firefighters. After getting a grip on emotions, the chief’s mind races frantically over the details that will have to be organized over the next 48 hours.

The chief needs to inform the department, contact the family, the funeral home and fire-department chaplain (if the department has one) and make various other arrangements. Depending on the circumstances, the media might also have to be informed. Visitation, funeral and reception details need to be sorted. City police might be enlisted to assist with road closures. Arrangements will have to be made with local hotels to accommodate firefighters from other departments who may want to pay their respects. The overwhelming number of details for which the department is responsible causes the chief to realize how truly unprepared everyone is to effectively handle this situation.

Was there a way to reduce this stress and anxiety ahead of time? Can departments be better prepared for such a daunting task? Absolutely. The addition of an honour-guard division to a department puts into place the tools to assist members, and to support each other and the grieving family. The creed of the honour guard is to honour the fallen, remember the traditions and support the families of those who were willing to sacrifice their lives for their communities. An honour guard provides stability and guidance, and maintains meaningful practices in the fire service.

A co-ordinator, who is responsible for overseeing all facets of the division and provides guidance and direction to the participating members. The co-ordinator also maintains all communication with the fire chief and relevant parties. This person should be proficient in all elements of communication, including social media.

A drill commander, who leads marching drills with a powerful voice and has knowledge of marching commands. The Canadian Forces Drill Manual outlines movements that can be altered to suit individual situations.)

Pipes and drums; any members with these musical skills can play for your department or join in with other departments at appropriate opportunities.

The colour party generally consists of flags, but axes, pike poles and other firefighting tools can also be used if available.

The marching unit comprises members who will march in parades or other special events; it is generally made up of two or more members.

All these components come together to create a formal and complete honour-guard division, however, not all of these components are necessary to begin building your team. With just the class-A dress uniform, some strong leadership and commitment, any department can start an honour-guard unit. The Brampton Fire & Emergency Services honour guard began in 1974, wearing simple shirts and ties; don’t be intimidated – you have to start somewhere.

Choosing members
The type of person who will best represent what the honour-guard division is all about is one who carries himself or herself respectfully and demonstrates an appreciation for appearance, etiquette, values and professionalism. These members should go through a probationary period to make sure that they are worthy of the honour of being part of the honour guard. Members of the honour guard should be cognizant of the fact that they represent not only their departments, but also their chiefs, their cities and their country while on duty in their uniforms. These recommendations are guidelines drawn from personal experience; in the end, whether a member becomes part of the honour guard is at the discretion of the co-ordinator.

Drills and equipment
Drills, or marching practices, are necessary to maintain precision, unison and cohesiveness in the marching unit. Once a location has been finalized, drills should occur a minimum of once a month. The co-ordinator may determine that more practices are prudent, especially during the building phases of a department’s honour guard. It should be noted that even veteran honour-guard teams meet once a month to maintain their skills.

While a gymnasium works perfectly as a practice venue, the apparatus floor can always be used as a parade square. While attendance at practices should not be mandatory, members should be encouraged to attend to achieve consistency and so everyone is well prepared if called to duty. Dividing drills into workshops works well when teaching isolated skills such as  funeral details, visitation and casket details, carrying flags, carrying axes and pike poles,  marching rhythms, patterns and commands, and details pertaining to other special events.

It’s important to have certain props on hand so that the honour guard is ready when called upon; these include flags, flag stands, flag holsters, axes, pike poles, white gloves, pipes and drums, and, hopefully, at some point, a special honour-guard uniform separate from the fire-department uniform. The honour-guard co-ordinator should establish a routine for maintenance and safe and accessible storage of these items. There are numerous Canadian websites that sell honour-guard equipment.

Events and finances
An established and active honour guard will attend events other than funerals, such as:
Participating in community events will epitomize your department as an active, contributing and relevant part of your municipality. An honour guard can also participate in funerals outside its own city, province and country. Protocols for attendance at such events need to be established  upon development of an honour-guard team in order to be prepared when a situation arises. These protocols should be created by the co-ordinator and the fire chief.

The co-ordinator and the fire chief should also discuss financial support for the honour-guard division and determine the level of funding available from the department. There are, of course, other funding options, including the firefighters association and the municipality. Monies can be used to purchase and maintain equipment, for travel and accommodation at events, and to buy uniforms. However, it should be noted that members might have to pay for room and board when attending events out of town. While this is not ideal, this might be the norm at the building stages of your honour-guard unit.

An honour guard can be started without financial support from outside units, simply by wearing a dress uniform and making a commitment to attend local events and firefighter funerals; doing so will promote that idea that the honour guard is an active division in the fire department and within the community, and this visibility may lead to future financial support.

In addition to the honour-guard co-ordinators, it is a good idea to have a responsible and trustworthy member act as treasurer.

Uniforms and rules
A standard class-A tunic provided to firefighters at graduation can be worn as an honour-guard uniform. The addition of white gloves, a rope lanyard placed on the left shoulder, and perhaps a polished boot or tuxedo shoe will enhance the look and distinguish honour-guard members from other firefighters. Purchasing a custom uniform comes with time and money.

Rules, while in uniform, are different then when not in uniform. Once the uniform is on, members should not chew gum or monitor cell phone use; hat protocols should be practiced (indoors and outdoors). In addition, members should maintain a clean, tidy appearance, and carry themselves professionally as representatives of their professions, cities and departments.

For more information and direction about establishing an honour-guard division, look to a neighbouring department that has an active honour guard. There is also an opportunity to gather information at the third annual Canadian honour-guard convention in Niagara Falls this spring (http://www.hgconvention.com).

The traditions of the fire service are maintained through an honour guard. The Latin phrase Semper paratus means always ready. The responsibility of an honour guard to its department is to continue to practise and maintain fire-service traditions and to represent the department with honour, integrity, pride and professionalism at all events and opportunities.  Being ready when duty calls, and being able to adapt quickly, are key characteristics of a polished honour guard. When you have an active and present honour guard, all who come in contact with its members will appreciate the dignified and professional presence.

Charlie Martin, who founded Brampton’s honour guard, said, “Never let our honour guard die.” I am doing my best to fulfill his request and inspire others to do the same.

Components   of an honour-guard division

Jordan Paris has been a full-time firefighter for 18 years a proud member of the Brampton Fire & Emergency Services ceremonial honour guard for 12 years, serving the last two as co-ordinator and commander. He can be reached at jordan.paris@brampton.ca 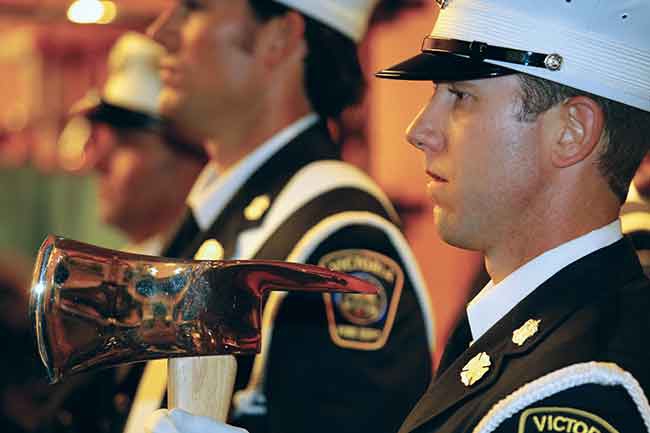