It was an astute juror at the inquest into two firefighter training deaths who asked the most poignant question: “Do you think ice-water rescue training should be required?” 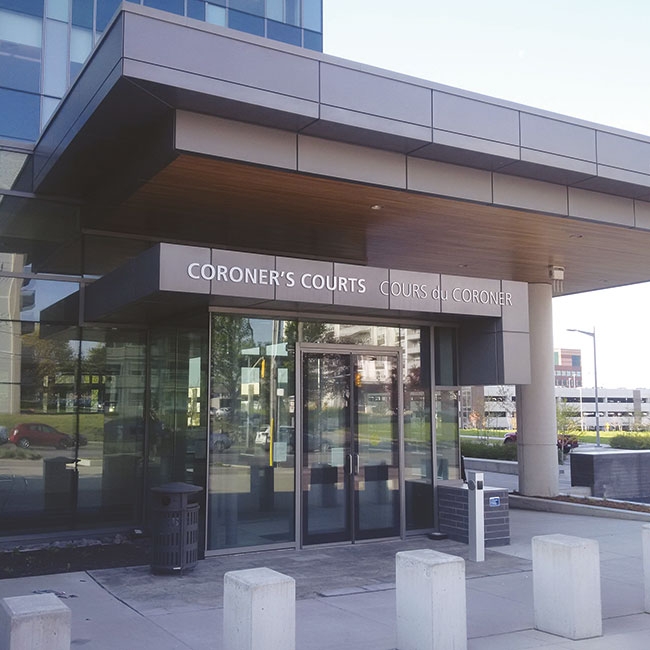 The question was posed on day two to Point Edward, Ont., volunteer Lt. Rick Burdett by one of five jurors, a man who spoke softly and chose his words carefully, almost apologetically, after hearing horrific testimony detailing the circumstances of a swift-water, ice-rescue training exercise that went awry.

Burdette explained how he came this close to drowning in the St. Clair River, this close to being crushed between an ice floe moving at remarkable speed in a ferocious current, and jagged chunks of shore ice, but was, at the last second, grabbed and hauled out of the churning water.

“It just kept breaking and breaking,” Burdett said of his efforts to grab the edge of the ice floe. “I kept doing it until I had nothing left. You’re fighting for your life just to break the ice and get on top of it.

“I was losing strength and just yelling for help,” Burdett testified. “And firefighter Ryan Carr was right there and grabbed my hand; whatever he did to get me up onto the floe . . . we just kept rolling and rolling to get to a thick enough point that it would hold us.”

Neither throw bags, ice picks, a whistle, nor an on-shore rapid-intervention team would have helped, Burdette said, the circumstances such that he had to keep vigorously pawing at the thin edge of the ice flow and breaking off pieces to keep from being crushed.

“If Ryan Carr didn’t pull you out,” Burdette was asked by counsel for the family of Point Edward, Ont., volunteer firefighter Gary Kendall, who was trapped and hauled under by the vicious St. Clair River, “do you think you would have been able to self-rescue?”

Burdett shook his head no, unable, for a moment, to speak.

And then, barely audible: “I wouldn’t have been able to.”

The two-week inquest in Toronto in May examined the deaths of Kendall, 51, on Jan. 30, 2010, and firefighting student Adam Brunt on Feb. 8, 2015; both died during training provided by Newmarket, Ont.-based Herschel Rescue Training Systems, an unregulated third-party operation run by Terry
Harrison. Both men died in swift-moving, icy water. The jury issued 15 recommendations urging government to regulate private trainers and develop a standard that focuses on firefighter safety.

It’s hardly surprising that the jurors – all lay people, all dutifully listening to sometimes combative, sometimes technical, and sometimes gut-wrenching testimony – wondered why firefighters risk their lives to train to rescue people in the raging St. Clair River after hearing that they are rarely called to do so.

Burdett’s response to the juror’s question, Do you think ice-water rescue training should be required?

“If you don’t have something for the departments,” Burdett said, “anybody who’s on shore is going to go out there after [a trapped person], so it would be better to have somebody who’s trained than your average Joe off the street.”

Asked whether training should occur on the St. Clair or only in less dangerous still-water conditions, Burdett’s was blunt.

“We should be training in the area that we are responding to,” he said. “We don’t have ponds and pools that people are drowning in; it’s the fast water that people are getting caught in.”

“I’ve been down to the river many times,” Burdette testified, “and it doesn’t flow that way all the time. It was just, I don’t know . . . Mother Nature gone bad.”

Similarly, Capt. David Dobson, who also struggled in the mighty St. Clair on Jan. 30, 2010, and who testified that conditions changed quickly, said training has to be realistic.

“It doesn’t matter what we’re trying to do,” Dobson said, “we’re always preparing for the worst case.”

Sarnia firefighter Daniel Nelles gave confusing testimony about safety precautions during the Jan. 30, 2010 exercise, but similarly said it’s critical for rescuers to train for the circumstances in which they work.

“The Office of the Fire Marshal has ceased [ice-water] training, and management doesn’t want to be in a position that they’re held accountable for a similar type incident,” Nelles said. “But by not training in the St. Clair River, we [would be] putting ourselves at a liability of not training in the same environment in which we may be rescuing.”

The Sarnia and Point Edward departments ceased training in the swift-water part of the St. Clair after Jan. 30, 2010, doing so only in the protected harbor.

Witnesses testified that there was, on Jan. 30, 2010, accountability, a rescue truck on shore with a defibrillator, a platoon system in place, strict instructions given by Point Edward Chief Doug MacKenzie for firefighters to be aware of their physical limits and ensure each other’s safety, and a lesson on hand signals.

Yet Kendall became trapped between a massive ice floe that was being pushed by the current, and the shore ice, unable to right himself and out of reach of firefighters on the floe.

On day three, the lawyer for the Office of the Fire Marshal and Emergency Management introduced into evidence a copy of a certificate in ice-water rescue issued to Kendall in 2009 by Herschel Rescue, which had been hired previously to provide training to Point Edward firefighters.

The document states that Kendall had completed a training course Ice Rescue NFPA 1670 Technician, and Chief MacKenzie understood that his firefighters had been certified. Which was not the case.

Herschel proprietor Terry Harrison had been sought by the Office of the Fire Marshal in the early 1990s to help develop an ice-water rescue program after an inquest into the death of Port Colborne, Ont., firefighter Harry Chevalier recommended that the province do so.

Harrison was, by all accounts, a highly regarded trainer who later furthered his expertise through courses in Michigan, Ohio,
Indianapolis and Pennsylvania, and was hired, along with other instructors, by the Ontario Fire College to deliver its ice-water rescue training. Neither Harrison’s LinkedIn page nor his company’s Facebook page list his credentials.

The Office of the Fire Marshal is the only authority in the province that has jurisdiction to certify students to NFPA standards.

Kendall’s certificate is signed by Harrison. Photocopy-style logos from the Ohio State Fire Academy and Michigan Urban Search and Rescue appear on the certificate; it’s not clear why. Upon careful examination, there is no indication of certification to the NFPA 1670 standard, simply the words completion of a 20-hour training course Ice Rescue NFPA 1670 Technician, and the date, Feb. 6-8, 2009.

“Has anyone ever communicated with you about whether this certification met the appropriate standards?” OFM lawyer Andrea Huskins asked Chief MacKenzie.

“No,” the chief replied.

Ultimately, MacKenzie testified, he was unaware that when the fire college offered ice-water rescue courses it did so only in still water rather than swift water; additionally, he said, the fire department would be unlikely to affect a rescue in the St. Clair River, where the training occurred and where Kendall drowned.

“We have never had a save in that river,” he said.

Asked why he chose to have his firefighters train in inherently dangerous circumstances, MacKenzie said there’s an expectation that the fire department will respond.

“  . . . if we don’t do anything I guarantee you we are going to be crucified as a department,” he said.

“If your firefighters were at a house fire that was fully engulfed, you wouldn’t for a moment think about sending in your firefighters in if you thought there’s any chance they would die, and would you agree with me that probably public perception would support you on that?”

“I’ve been doing this for a long time,” MacKenzie said. “And there are a handful of people who would think you’re the greatest thing and another handful that would be bashing you.”

Kendall family lawyer Alex van Kralingen asked MacKenzie if he was aware that when the fire college offered ice-water rescue that it did so only in still water.

“Would the fact that the [fire college] does not combine ice-water rescue training with a swift-water environment have affected your decision to hire Mr. Harrison?” Mr. van Kralingen asked.

“Because if the college is doing that there’s got to be a reason.”

“Would it have helped you,” van Kralingen asked, “for the Ontario Fire College to have communicated that to you at some point?”

Repeatedly, during the inquest, jurors heard how dangerous fire fighting is; yet in Ontario there are no mandatory minimum standards for firefighters to get hired.

The co-ordinator of the firefighting program at Durham College, where Brunt was a student, was adamant that all firefighters should be trained and certified to NFPA 1001.

Ralph Hofmann told the inquest that industry and government need to smarten up, shake the it’s-always-been-this-way attitude, and enforce mandatory NFPA certification.

“The challenge,” Hofmann said, “is that there has to be a willingness to change; the challenge is that [the words] standards and voluntary don’t go in the same sentence . . . To say that a standard is voluntary negates the standard.”

Hofmann said there’s no question students take specialized courses , such as ice-water rescue, outside of the college program to give them an edge on their resumes, but the school neither condones nor promotes the programs.

Acting Capt. David Gillespie, an experienced trainer with the Peterborough Fire Department, testified that the area at the foot of a low-head dam called the boil is known as a “drowning machine” and is unsafe for training. Gillespie recommended rescue techniques in such conditions be shore-based or technical rather than in-water.

Harrison testified that he had taken Durham College students into the Saugeen River in Hanover, Ont., near a low-head dam and had them dive into the boil to experience the current. Brunt was third in line as the students later down the river in the current, out sight of Harrison, who was at the rear.

Harrison had said the St. Clair River, in which Kendall died, is among the most dangerous bodies of water in the province – along with the Ottawa River – and said he was excited to experience its challenges when he worked with the Point Edward Fire & Rescue.

“Should a training exercise ever present a high risk to the trainees?” David McCaskill, lawyer for the Ministry of Labour, asked Gillespie.

One of the problems, suggested coroner’s counsel Michael Blain, is that by the time a witness calls 911 and rescuers arrive and gear up, it’s not unusual for a patient to have succumbed to the conditions.

“So in terms of affecting a rescue it’s a very low margin?” Blain asked.

“We’ve also heard,” Blain said, “that local agencies should train where they might respond. What are your thoughts on that?”

Gillespie said only the Ottawa Fire Department’s specialized technical rescue team, which logs a minimum of 40 hours of progressive training, runs exercises in swift water conditions with ice. Other members of the department may attend rescues but operate from the shore only.

“I’ve talked to Thunder Bay, Sault. Ste. Marie . . . and our department, and that’s a no go,” Gillespie said. “What we do train for is situations in which we can affect a rescue.”

Related
From the Editor July 2017: Government oversight needed
Between alarms July 2017: The importance of crisis communication
Extrication tips July 2017: Throwing SHADE on your size-up
Back to basics July 2017: Making a mayday call