Training officer Gary Mosburger’s job is to make sure everyone goes home, and that means keeping up with technology that can potentially save firefighter lives. 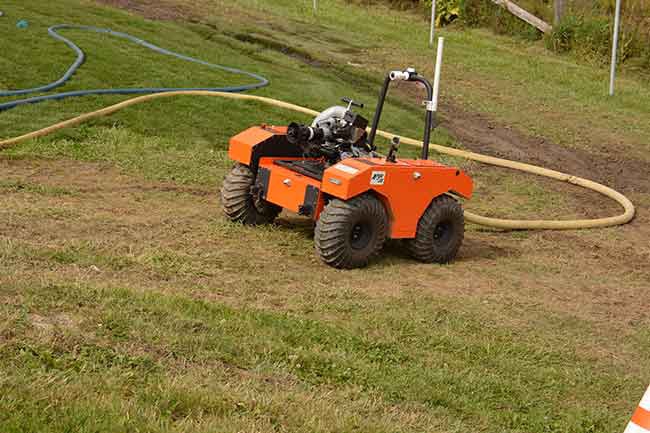 Mosburger is not only aware of the latest risk-reduction technology, he and his firefighters at the Wilmot Fire Department in Ontario are also contributing to it.

For more than two years, Mosburger and other department members worked with local manufacturer Argo to help the company incorporate robotics technology into its new firefighting vehicles.

The merger of the robust, go-anywhere, amphibious vehicles and remote-controlled fire fighting has the potential to prevent accidents, reduce injuries and protect lives, Mosburger says.

“We’ve been teamed up in developing some technology to make it easier to do our jobs, as well as potentially not having to put firefighters into risky areas where they don’t necessarily need to be.

“Not that we’re trying to reduce our [numbers of ] firefighters by any means, but reducing risk is big.”

“We’ve had a lot of consultation with Argo about how we do our jobs, how they perceive us doing our jobs; there has been a lot of conversations about how to do things better.

“One of the primary uses for us would be for hazardous-materials responses,” Mosburger said. “For example, being able to drive a robotic Argo into an area, dragging the hoselines with it, and putting water onto a rail car that could be on fire, reducing the potential of a BLEVE [boiling-liquid, expanding-vapour explosion].”

Many Canadian fire departments and search-and-rescue teams use Argos or similar vehicles – Polaris, Kubota, Kawasaki, Arctic Cat, John Deere, Bombardier – that hold stretchers and other equipment for wildland fire fighting, off-road incidents or disasters such as floods or snow and ice storms. All Argo utility vehicles are amphibious, and the company says it is out front with its robotic units.

Argo had solicited feedback from a volunteer search-and-rescue team about details such as optimum placement of tools and equipment. Now it’s refining firefighting vehicles.

Argo is a unit of Ontario Drive & Gear in New Hamburg, Ont. Essentially, Argo builds a basic, all-terrain/amphibious platform then adds firefighting equipment specified by the department. Wildland units include a CET pump; the robotic J5 Responder is equipped with either a Task Force Tips or Akron Brass monitor.

Stiff says he knows that to crack the fire market the company has to demonstrate the safety and effectiveness of its vehicles to chiefs.

“The way we used to go to market is we sold a platform . . . the problem is that gets sort of a blank stare and we realize that’s not overly effective,” Stiff said. “And when we did sell [a vehicle and add firefighting equipment], it was a long process. Then we learned that if we can come up with a line of fire fighting equipment, that would be better for the industry. ”

Argo launched its line of firefighting vehicles at its headquarters in August. Mosburger and a crew from the Wilmot Fire Department helped to demonstrate a robotic firefighting Argo. TFT’s Brian Podsiadlik handled the remote-controlled monitor.

“You can now send an Argo into a lake for a boat fire, or send it through water to fight a large lakefront cottage fire that may be unreachable with a regular fire truck, or send it into the bush for wildland support,” Podsiadlik said in an interview.

“You can connect hoses and advance this portable vehicle from a fire truck or from the fire pump to the hazard zone or the fire, whatever you’re trying to mitigate, so it’s useful for both municipal and industrial fire brigades.”

Essentially, Podsiadlik said, fire personnel connect a supply hose or high-volume hose to a manifold; water then flows into the monitor – the same type of monitor found on top of fire trucks. Nozzle selection depends on the incident and fire-department preferences.

“Personally I think it has a lot of potential,” Podsiadlik said. “I see more potential on the industrial side or for municipal departments that cover industrial facilities, just because you’re able to send this unmanned vehicle into what may be a hazard area where there’s unknown or bad stuff in the air without having to worry about the high risks to your crew, and still mitigate the hazard.”

The Canadian-made Argo J5 Responder Unmanned Firefighting System is remote controlled and can be sent into situations too dangerous for firefighters.

Fire-industry supplier AJ Stone Company Ltd. is the Ontario rep for Argo. Dan Stone says the robotic unit, which retails for about $55,000, is ideal for airports, industrial departments, or big cities with lots of industry.

Argo’s robotics guru Jason Scheib says that ideally, fire departments will continue to provide feedback to Argo so the company can refine the firefighting line of vehicles. (A new section of the Argo website – www.argoutv.com – focusing on fire was to be up and running in March.)

“Our focus is to have a real feasible unit,” Scheib says of the robotic Argo, “so that’s why we have the size of the unit we have; it can handle extreme terrain, it’s completely amphibious, and I can deploy it from the back of a pick-up truck.

“The conversations that I’ve had so far with firefighters is why would I send my guys first into the fire when I have this type of equipment. I can attach my hoses and drag them out to the scene very quickly, and charge up the lines very fast without having to send guys close to the fire first.”

Argos can be equipped with sensors controlled remotely through cameras in a command area, and an infrared camera can direct the nozzle stream toward hot spots.

“If you had to go into a building and it’s very dark and full of smoke, that’s not an ideal place to send a firefighter,” Scheib says, “but you can send in the robot and let it to do the really dangerous work, especially if you don’t know what’s in the building – it could be gasoline or plastics or other toxic stuff. You can send the unit in ahead, hit all the hot spots and then send in the firefighters in behind to clean up the mess.

Argo’s president says the company will continue to tweak designs as it works with more fire departments. It has already worked with TFT to create a single device that controls both the vehicle and the monitor.

“We know the product has to be refined,” Stiff said, “but we’re very close. We certainly have a lot of experiences that say it has been used in some pretty radical situations and has done a great job.

“You put the right equipment on it and you can do some serious fire fighting, without putting the responder at risk.”

Stiff acknowledges that $55,000 is a fair chunk of change for volunteer operations and is looking for options – sponsorships and regional purchases, for example.

“I know a lot of fire brigades share resources; when something happens and they know a piece of equipment is available, everybody’s happy to make sure that it’s available for whatever crisis is going on.”

So that everybody goes home.