Part 2 in considering your rural water supply and attack 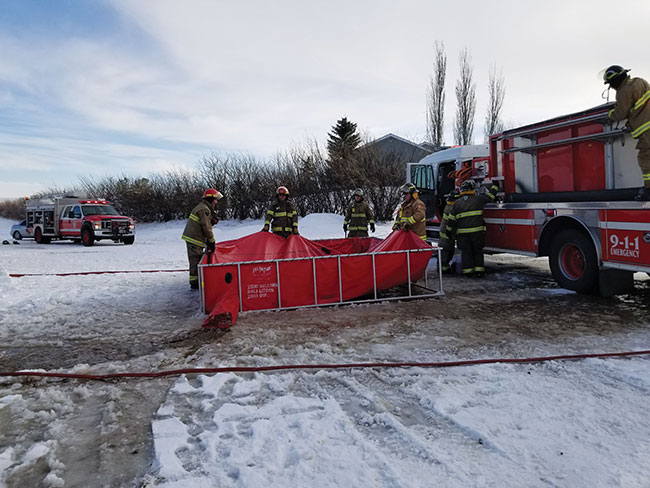 RMSCFD cleaning up after a quick stop on a barn fire thanks to proper flows and aggressive tactics. Photo: joey cherpin

Part 1 of this article ran in the January edition of Canadian Firefighter magazine and gave insight into why we need to apply specific flow rates, and how it is beneficial to our operations, our safety and ultimately our customers. Going beyond the why and into the how, this article provides some ideas for tactics that are already being commonly used to obtain a water supply in areas without pressurized municipal hydrant systems.

Supplying goes beyond obtaining. We must consider where we find the water source, how the water will be delivered to the scene and at what rate. Fill sites vary drastically. In rural southern Saskatchewan and beyond, many ranches have dugouts. If you look hard enough you will often have streams, creeks, and ponds hidden just out of plain site. Some properties have water wells and large holding tanks or cisterns that may hold thousands of gallons. When static water isn’t available, mobile solutions are needed. Frequently, commercial water hauling companies are called upon by the request of fire departments that can carry up to 16,000 US gallons (USG) in the form of a B-train semi with two trailers. Fire department tenders usually carry between 1500 USG and 3500 USG. It is also common to have farmers, ranchers and community members show up with water trucks and tanks offering to help. These should be considered a supplementary bonus and not a part of your pre-fire strategy. Relying on something that isn’t guaranteed will set your incident on a path for failure. Coordinating and working with community members is a topic that deserves its own article later on. Regardless of the source, water supply can be one of the most logistically difficult operations. A common practice at rural fire scenes include a drop tank and shuttle with a primary pumper on site and tenders delivering to the site. Occasionally we see a nursing operation where the tenders pump into the primary pumper directly. Skipping the step of dumping into a tank, and instead nursing, will create a significant deficiency. The tender can only supply at the rate equal to the pumper’s discharge needs after the booster tank is filled. At a common flow rate of 300 US GPM (gallons per minute), a 3500-gallon tanker will have a substantial offload time. A drop tank allows for the same desired rate of flow (at pump operator’s discretion), while the tender has already begun the trip back to the water supply, or better yet, has began returning from the fill site before the drop tank is empty. Drop tank operations can be expanded drastically within the space of the fire scene. In a large open area, the drop tank site could easily consist of four or five portable tanks. Jet siphons allow for easy water transfer from tank to tank using the Venturi effect.

Fill site is the title given to our location used for refiling tenders. The fill site can be at a myriad of different water sources. The best, and usually most consistent, is a hydrant. A fire hydrant allows for positive supply and can fill large tanks on home-made apparatus that are only otherwise equipped with a trash pump, or low volume pump for grass fires. A hydrant allows for a quick fill with minimal equipment. Frequently, however, the turnaround time to a hydrant site will not pay off. It is up to the officers and drivers to determine if driving past a static body of water to a hydrant further away will be more efficient.

When a static water is the source of choice, there are a few options for getting water to the scene. A single apparatus can arrive at the fill site, draft to fill, and then depart — very simple. To speed the process up, you can stage an apparatus at the fill site, leaving the suction hose in water and a supply hose laid out to fill the arriving tenders. This can also be done with portable pumps left at the fill site and manned. Some departments even have apparatus set up almost exclusively for obtaining a supply with portable pumps, suction hose, and some smaller diameter supply line. This apparatus sometimes reverse lays from the on-scene pumper to a nearby source such as a dug out or a stream. Some departments perform what is called a rural hitch. This is useful when there is a long lane into the fire scene and there is not enough room for apparatus to turn around. The rural hitch has a clappered or valved siamese attached to large diameter hose, which is dropped at the end of the lane. The first supply apparatus pulls up and begins nursing into the siamese. A second tender can pull up and begin pumping into the other side of the siamese simultaneously or after the first truck is empty. When water tenders are bountiful, this works great, but again, when nursing, the trucks are now sitting to offload, and wasting precious minutes that would be spent driving to and from the fill site. An adjustment to the rural hitch is to have a drop tank at the end of the lane, and a second pumper that is committed to the incident scene. This second pumper stays with the drop tank and pumps down the laneway supplying the primary pumper. You now free up a tender to spend more time on the road, but you also need to commit a second pump. It is hard to choose a method that works every time. This must be determined by number and type of resources, distance to fill site, and tender capacity.

Caution must be exercised when working from a static water supply. Rarely can we clearly see the bottom of a stream bed or know what has settled in the bottom of a cistern that may be used for agricultural purposes. Using a floating strainer, or a low-level strainer is imperative. A well-designed low-level strainer should do at least three things. One, it should be able to pull water from only a couple of inches, even when using a 5” or 6” hose. Secondly, it would have a jet siphon so that it can also be used for tank transfer. Lastly, the strainer should strain. A screen preventing rocks from being sucked up is very important to the life of the pump, and the operation. When the fill site has moving water, or the bottom is suspected of being very rocky or sandy with concerns of drawing it up, further tactics need to be implemented. The use of a ladder laying into the water to keep the strainer off the bottom will prevent the induction of unwanted debris. The ideal low-level strainer will also come with a removable float for use in deeper water. Another quick option to provide the same effect is to tie an empty foam pail to the strainer to set the depth of the intake. The pail will remain buoyant, and you can tie the strainer to it set whatever depth is needed. When the water is moving, there is a chance that the strainer could be pulled with the stream, forcing it to ride up against the shore. If the ladder alone does not keep it in place, a 5’ prying bar, or pike pole jammed into the creek bottom, lashed to the hose or ladder with rope or webbing should provide further stability. Another option is to tie the rope to the hose, and anchor it further up stream. Sometimes the shallow depth of a stream makes it difficult to draft. Depending on the width of the stream, and materials available, a dam should be constructed. Sometimes the re-arranging of some rocks and stone will raise the water to a sufficient level. When that doesn’t work, a ladder across the banks of the stream, with a salvage cover or heavy tarp can create a dam. Quite frequently a tractor or other piece of equipment can be very quickly used to push dirt into a creek and build a dam. This needs to be calculated though. Do what is required, but little more. Wasting time and resources to unnecessarily dam a moving body of water could have other consequences like flooding and softening the bank where an apparatus needs to park to fill up.

Some commercial products can aid heavily in obtaining a substantial, sustainable water supply. The TurboDraft offers a 5” and 2.5” version. This is a drafting aid to be used over longer distances. Both sizes rely on the Venturi effect similar to the standard jet siphon. It is operated like a high-capacity jet siphon, but without requiring hard suction hose. This is advertised to be capable of moving 670 US GPM from 50’ away while 200 US GPM is being discharged to the appliance. Some departments have experimented with different intake appliances, using hard suction as the last 10’ at the intake and slightly larger discharge lines. These departments have far exceeded 670 GPM and at distances of one hundred feet away or further.

Keep in mind, the given water supply being used must meet required flow rates. Often times this means calling mutual aid, commercial water hauling services or sounding another alarm for additional apparatus and personnel. Whatever the source ends up being, it should be calculated and communicated. Command also needs to decide if efforts should be focused on a obtaining a supply, or using on board water to protect a search team.

All of the theory in the world is useless unless it is put into practice. Train on fill site, drop tank, nursing, and relay pump operations and practice setting up portable tanks, drafting, and other rural water supply operations. Remember, citizens expect mastery when we arrive, every time.