Steam: What you need to know

In previous articles, I have discussed the need for live-fire training and given readers a deeper understanding of what heat is. In this article, I will delve into the interactions of steam and how it interacts with fire extinguishment and can cause burns to a firefighter. 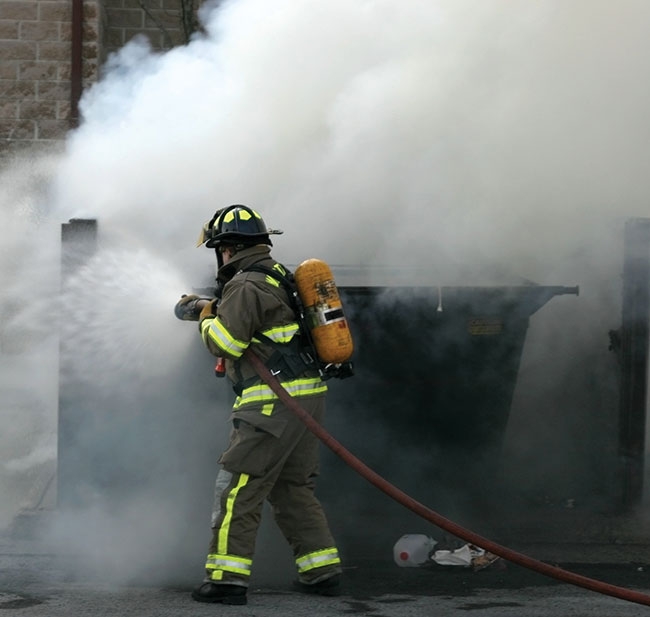 Firefighters must understand the different nozzle patterns and apply them at the correct time and with the right technique to effectively extinguish and avoid deadly fire dynamics like flashovers and rollovers. A primer on the dynamics of steam. By Lance Bushie

Each of the different nozzle patterns needs to be understood and applied at the correct time and with the right technique to effectively extinguish and avoid deadly fire dynamics like flashovers and rollovers, resulting in steam burns.

Knowing what fire stream to apply, the volume of water to apply and what effect it will have is essential. If applied improperly, negative effects will occur.

First off, gallons per minute or litres per minute must match the BTUs or thermal energy that are present for extinguishment to occur. If the flow from the nozzle is not sufficient to cool the surfaces or the gases, the fire will grow.

According to William Clark, who founded the International Society of Fire Service Instructors, “Water has the ability to absorb heat more than any element except mercury.” Understanding that thermal energy is stored in fire gases emanating from a fire is essential.

Cooling these gases and surfaces is essential to safely advancing to the seat of the fire, and if sufficient cooling is accomplished the water application will delay or prevent flashover, the deadliest form of fire behaviour.

Steam is important for firefighters to understand. The amount of steam created does relate to the amount of thermal energy being removed from the fire gases, lowering the flash and flame point of the gases, reducing the chances of rollover and flashover.

The production of steam by applying a fire stream during an interior attack does not always generate the feared high temperature steams that we thought it did. If we apply short bursts of water and limit the amount of steam produced, the thermal layer can remain intact while the production of steam and water contacting surfaces cools both gases and surfaces by removing thermal energy.

We must also be aware of the expansion ratios of steam. For every litre of water converted to vapour, 1,700 cubic litres of steam are generated at 100 degrees Celsius. Every firefighter must understand the travel of the flow path and where the fire is getting its oxygen and where it is exhausting gases.

Thermal energy has not been fully removed until the steam reaches the outside atmosphere. Studies by the Underwriters Laboratories Firefighter Safety Research Institute have shown that the application of water to fire gases affects the entire structure due to the laws of thermal dynamics and temperatures finding an equilibrium throughout the structure.

Lowering the temperature of the gases will narrow the flammability range and reduce reignition of gases. Steam will also create a buffer below the gases and further inhibit re-ignition by excluding the interaction with oxygen.

Excessive steam production can upset the thermal balance, remove visibility and impact your PPE. Note that steam which hasn’t mixed with fire gases is colourless and is as transparent as air. As steam expands the neutral plane lowers, influencing the layer of fresh air that we, as firefighters, operate within near the floor. Keeping the thermal balance intact is the goal. Fresh air and visibility are your friends, while limiting the amount of steam contacting your PPE.

Steam interacts with our PPE by warming it and penetrating the layers straight through our vapour barrier, reaching our skin.

Because the steam molecules are much smaller than the pores of your skin, steam is able to penetrate the epidermis (protective outer layer) through pores. Only once the epidermis becomes swollen due to the amount of absorbed water in the dermis, do the pores swell and become too small. By this time, it is too late and the damage has been inflicted.

Once the steam comes into contact with your dermis, it condenses and releases the stored thermal energy (Latent Heat of Vaporization) directly to the dermis and causes second-degree burns.

Another theory suggests that the air gap between the layer of our skin and clothing gets saturated with moisture from sweat off your skin. The thermal energy from the fire environment penetrates your PPE and warms that air layer between your clothes and skin.

Once the temperature of the air and water vapour reaches its dew point or it gets saturated, the water condenses on the skin, causing burns.

So, what should we do with this new information? We must first agree that, as a standard approach to an interior attack, we use the straight/solid stream to cool the environment by limiting the volume of steam production and air entrainment. If, by observing your surroundings you note this has not been enough to lower the temperature, you can apply water over a longer duration or change tactics to use the power cone.

Quick shots with a power cone to the gases will produce more steam than the straight/solid stream, but be far more effective in cooling. If the correct amount of water is applied and without moving the nozzle while flowing water, causing air entrainment, the gases will contract and cool with greater efficiency than the solid/straight stream.

The straight/solid stream pattern should be applied in three-to-10-second bursts, depending on the amount of thermal energy stored in the surfaces and gases. The power cone should be applied in a sufficient number of one-second bursts. After each application of water to cool the environment, observe the reaction of the gases. Use your thermal imaging camera at frequent intervals and note the changes.

Steam is necessary to fight fires.

We must be aware of the amount of steam generated, where the flow path is taking that steam and how effectively the environment is being cooled.

We also need to be more aware of the limitations of our PPE and leave the super-heated environment before thermal energy penetrates our gear.

Lance Bushie is chief of the High River Fire Department in Alberta and president and lead instructor at Trident Fire Training & Consultancy Inc.

Related
Share it. Don’t wear it.
Fit for Duty: October 2018
Back to basics July 2017: Making a mayday call
Tim-bits July 2017: Stretching from the standpipe