A case study about the importance of interagency training 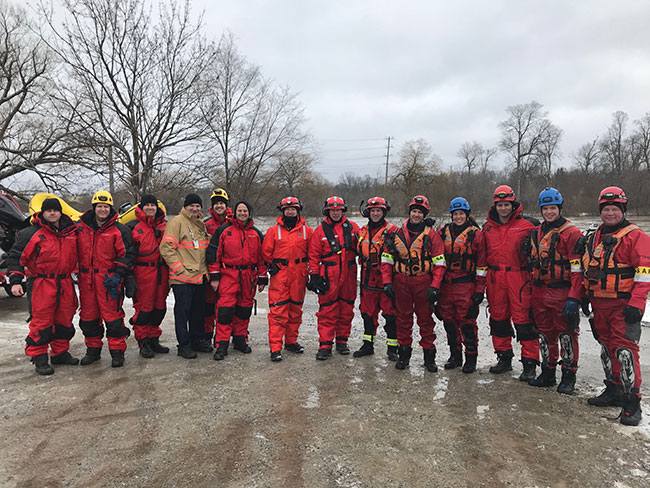 Few first responders would dispute the importance of interagency training. Agencies are incapable of working in silos. Even a routine structure fire requires the support of police, emergency medical services and utility companies, just to name a few resources. Despite the need for interagency cooperation, preparing for it is easier said than done. It can be challenging to find time and money to train our own staff, without the additional resources required to coordinate with community partners, especially when its benefits may not be realized until some point in the distant future. Still, departments rightly persevere to train together. In Ontario on Jan. 12, London Fire’s water rescue team and London police’s marine unit saw firsthand the value of interagency training while undertaking one of the most challenging rescues of their careers.

Preparation is Success
London fire department’s special teams rely on individual team leaders to oversee training and operations. On Jan. 12, C Platoon’s water team leader, Captain Johnston was carefully watching the Thames River. High temperatures and recent heavy rainfall created significant flooding and swift water conditions. Johnston had scheduled a joint training exercise with the marine unit but the extra rainfall had sped up the river, making training dangerous. He weighed the risks and benefits of proceeding and decided the opportunity to work with allied agencies was too valuable to pass up. Besides, he reasoned, many of the risks could be mitigated with additional safety precautions. He then consulted his police counterparts: training was a go.

Police and fire water rescue teams met at a community boat launch and discussed their objectives. For the next two hours, responders reviewed equipment and practiced swift water ferrying and maneuvering around shoreline obstacles. Flowing at almost twice its usual speed, the river was moving at an estimated 500 metres cubed/second, creating a current of 8 km/h, compounded with the water’s frigid temperature. At less than 3°C, anyone caught in these icy waters without survival gear would have about 10 minutes of movement before succumbing to debilitating hypothermia.

When the training session ended, members of the police and fire teams pulled their respective zodiacs from the river and discussed lessons learned. They been able to practice their technical rescue skills but had also gotten to know one another. As any first responder knows, there is an inherent barrier to working with strangers in emergency situations. In these instances, responders must spend valuable time and energy sizing up their ad hoc team; efforts that would be better served focusing on the task. The teams didn’t know it yet, but in about two hours, they would be called to the same boat launch for a real rescue. But, this time, they would return as teammates instead of strangers.

The Rescue
At about 2:50 p.m., 911 dispatchers received reports of two kayakers struggling in the river. Fire and police teams were dispatched at 2:52 p.m. With the water moving fast, the responders knew it would be a challenge to even find the kayakers. The zodiac units raced back to the launch while other engine companies and police officers scouted bridges looking for any signs of the kayakers or witnesses who could help narrow their search.

Members of London Fire’s marine 3 unit were the first to arrive at the boat launch and began preparing their rescue craft. Soon, they were joined by the police marine unit and their larger zodiac. With the benefit of the day’s training, the teams knew that using the more powerful vessel would give them their best chance for rescue. Together they moved the fire zodiac out of the way and launched the police boat with a composite crew from both agencies.

Meanwhile, London Fire’s marine 2 unit travelled downstream past where they suspected the kayakers might be located. This would allow responders to start simultaneous approaches upstream and downstream, increasing their chance of finding the lost kayakers. The responders found a washed-out road to serve as a makeshift launch site. They drove as close to the water’s edge as possible and hand bombed their zodiac the rest of the way.

Cloudy and windy weather hampered visibility. Debris clogged the river; fallen trees and discarded furniture had clustered into artificial islands. At one point, the upstream rescue team had to navigate through a decommissioned dam almost totally blocked by debris. With great care, the police zodiac pilot navigated past the dam by shooting the craft through a small opening of turbulent rapids.

On the other side of the dam, the team saw an officer onshore pointing to a pile near the river’s edge. As they moved closer, they found one of the missing kayakers sitting on top of an entanglement of sticks and logs. This floating island had provided some refuge for the kayaker but now prevented the zodiac from getting close enough for rescue. The responders knew that time was of the essence. The kayaker was showing signs of severe hypothermia; barely able to speak or move. Without hesitation, two firefighters and one police officer entered the water. To reach the patient, they had to swim, then crawl across the debris field. They secured a sling around the kayaker and moved him into the water. The responders still aboard the craft quickly pulled in the rescuer’s tender line, bringing the team and patient back to the zodiac. Once at the boat, the composite crew removed the kayaker from the water and assessed their patient a mere 24 minutes since being dispatched.

The downstream team faced similar conditions, made more challenging travelling against the current. A break in the water’s surface allowed for the crew to identify the second kayaker. His nose and mouth had been kept above the water by his life jacket, but he appeared to be unconscious. The zodiac pilot maneuvered against the swift current bringing the boat alongside the patient. The crew then lowered one responder over the boat’s edge, holding his legs as he reached for the floating kayaker. Within seconds, the responder grabbed hold of the kayaker and the crew successfully pulled them aboard. The team then started applying their hypothermia kit to the patient as they sped towards the shore.

Onshore, the incident commander was coordinating with EMS so, as the teams returned to shore, paramedics were waiting and the patient’s were transferred without incident. Less than 40 minutes since the initial dispatch, both kayakers had been removed from the river and were en route to more advanced medical care.

Of course, the story does not end with the transfer to EMS. The kayaker’s were both admitted to the hospital in critical condition. Both have since recovered.

TAKAWAY
As departments face increasing budgetary pressures, it can be hard to obtain appropriate training resources. Working with outside agencies to develop realistic training is additionally difficult, and sometimes, we miss the mark. However, when done well, training pays off in spades. It prepares our minds and bodies and makes our teams faster, more confident and safer. As famously observed by the Greek poet Archilochus: “We don’t rise to the level of our expectations, we fall to the level of our training.”

The success of London’s water rescue teams on Jan. 12 was the product of hard work and preparation—and a little luck. Had the teams not met that morning, it’s unlikely they would have readily launched a composite crew or had the communication system in place needed to effectively coordinate rescue efforts between police, fire and EMS. It’s also important to acknowledge that session was a continuation of years of work, which can easily go unnoticed. All said and done, the water teams’ actions on Jan. 12 was an unqualified success. As we continue to face training challenges, some at the organizational level and others at a personal level, our water team will use this event as reminder about the importance of preparation and we hope that, by sharing this story, it can do the same for others.