The danger within: The importance of tracking firefighter biometrics

Your crew gets a call for a working fire at a low-rise apartment complex with a person trapped. Within minutes, you are on scene. You’re told over the radio the resident is trapped on the top floor. As you and two colleagues enter the building, your core temperature begins to climb. You’re getting hot, but it’s nothing you can’t handle. You think you’re fine but you become flustered. You’re not sure why, because you’ve done this before. Your temperature begins to rise further and you can no longer focus on the search. You need to get out. 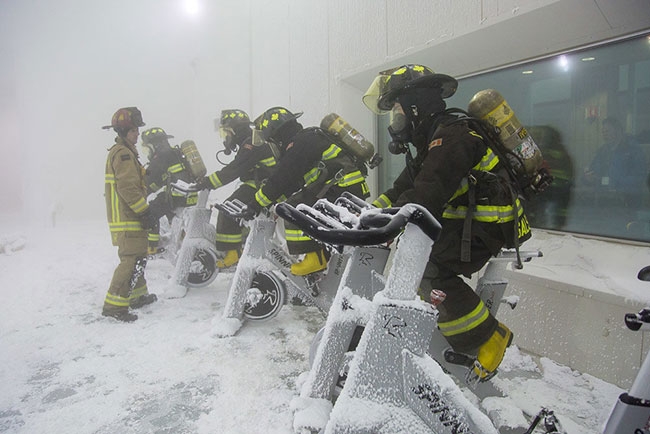 Firefighting students at Durham College experience the affects of cold on their bodies during an environmental stress workshop; even a slight core temperature change can have significant impact on the ability to make good decisions. Durham College firefighters are using unconventional training methods to figure out how their bodies react on the fire ground. Assistant editor Lauren Scott finds that new applications of technology are helping firefighters track physiological responses to incidents.

Fire fighting is stressful; the work takes a toll on the body. Research into the environmental stresses of the job, such as heat, cold, wind and rain, finds that external forces can have a significant impact on firefighters’ abilities to do their jobs. It sounds obvious, but everything that happens around firefighters has the potential to affect them from the inside out.

“[Firefighters] are more likely to die from a heat-induced injury of some type than they would from the fire itself,” says Lynneth Stuart-Hill, a researcher at the University of Victoria in British Columbia.

Stuart-Hill’s research came on the heels of the tragic death of a firefighter. In 2006, volunteer Tom Upton from the Gabriola Island Fire Department in British Columbia suffered a heat-induced cardiac arrest during a training session in Comox.

That same year, Stuart-Hill conducted research tracking the core temperatures of Victoria Fire Department members. She found that tracking firefighter stress by feel is not accurate, nor are ear-thermometers.

The body’s thermal receptors are located externally, on the skin. Firefighters can take off their turnout gear and instantly feel cooler. But, Stuart-Hill says, core temperature can continue to rise for up to 15 minutes after live-fire exposure, even after the gear is removed.

Essentially, firefighters may feel fine when they are, in fact, not. The stress and adrenaline of responding to an incident “tends to mask how they are doing physiologically,” Stuart-Hill said.

“Sometimes your body fools you.”

Michael Williams-Bell teaches in the department of fitness and health promotion at Durham College in Oshawa, Ont. While completing his PhD in late 2016 at the University of Ontario Institute of Technology (UOIT), Williams-Bell researched the effects of heat stress on firefighters’ cognitive abilities. He found that when a firefighter’s body reaches a core temperature of 38.5 C – just 1.5 degrees above the average normal body temperature – working memory and new learning became impaired. Williams-Bell says any fluctuations above or below the normal 37 C must be monitored to ensure firefighter safety. Simply judging environmental stress by feel, he says, is not reliable; better technology is the answer.

“As technology evolves, incident commanders in the fire service can start monitoring that information,” Williams-Bell said in an interview. “Being able to monitor and say ‘that person may feel like they’re fine, but we know their core temperature now is 38.5 and going higher, let’s remove them from the scenario.’ ”

According to a 2008 joint report from the U.S. Fire Administration and the International Association of Fire Fighters (IAFF) on emergency incident rehabilitation, performance decreases when core temperature drops to 35 C.

If core temperature drops further below 30 degrees, firefighters become extremely vulnerable to cardiac arrest and brain damage. However, it is unlikely that firefighters would reach this degree of exposure.

Research from the United States Army found that dehydration greater than two per cent of body weight could adversely affect mental function of simple tasks, such as word recognition. For example, a 90 kilogram (200 pound) firefighter would have to lose 1.8 kilograms (four pounds) of water to get to this point.

Simply put, Williams-Bell says that when firefighters’ core body temperatures increase or drop, they make poor decisions. However, few departments have technology available to monitor firefighters during an incident.

In the absence of funding for firefighter monitoring equipment (or a demand for it), Williams-Bell is educating prospective firefighters about the risks of working in hot or cold environments. With the help of Durham College, Williams-Bell is driving firefighter training and tracking in an unconventional new direction.

Since 2016, the ACE Climatic Wind Tunnel at UOIT in Oshawa has run an annual firefighter environmental stress workshop with Durham students. The $100-million testing and research facility has a climactic wind tunnel, two climate chambers and an ambulance-ride simulator used during the firefighter stress workshop. The climactic wind tunnel can accommodate wind speeds up to 300 kilometres per hour and can simulate wind, rain, extreme heat (up to 60 C) and extreme cold (to -40 C).

The chambers are typically used to test automotive and aerospace products, however, ACE has expanded the application of this technology to include research and education. One of the main areas of research is environmental ergonomics – how weather affects human physical and cognitive abilities.

During the environmental stress workshop, firefighting students track heart and breathing rates and using wearable biometrics from Quebec company Hexoskin. Williams-Bell says compared to training in room temperature, the students in the extreme heat chamber experience elevated heart rates and breathing rates, which inevitably depletes air faster. Their core temperatures rise to around that 38.5 benchmark or higher. For trainees who have never experienced what heat does to their bodies during a fire, Williams-Bell says this is a valuable lesson.

Rick Bowler, the lead instructor for the pre-service firefighting program at Durham College, says the simulated training will better prepare students for future calls and the elements they will inevitably encounter.

“It gives them that heads up, so when they do get hired, and it happens to them in the real world, they will remember,” Bowler said in an interview.

Admittedly, Bowler, who spent 36 years with Oshawa Fire Services, is a tad jealous of the technology at his students’ disposal.

Many training facilities do not have burn towers and new firefighters often don’t experience working against the heat of a fire or the cold of a Canadian winter until they respond to their first incident.

“It’s not always going to be a nice, sunny day when you do these things,” Bowler said.

However, both Bowler and Williams-Bell say the physiological data that helps firefighters understand their bodies is the most important takeaway.

“They actually see their breathing rate, their heart rate, all these aspects that they may not even think about when they’re doing this,” said Bowler. “Certainly we never did on the job, we just knew that . . . we worked our butts off today.”

Williams-Bell suggests that fire departments use existing technology to track firefighters’ physiological responses to incidents. Tracking, as he suggests, will give the incident commander a greater understanding of how crew members are doing mentally and physically, allowing the IC to ensure firefighter safety.

When searching for new technology to apply to firefighter tracking, some researchers have looked to the skies. Thermometer pills, originally developed for astronauts by NASA and the Johns Hopkins University Applied Physics Laboratory, have been used to track the core temperature of firefighters. The pill-sized monitor is ingested and a transmitter allows for wireless tracking.

Stuart-Hill conducted studies with the Victoria Fire Department in 2006 using core temperature capsules, no larger than a multi-vitamin. Her research found as core temperature rises, functionality continues to drop.

To get an accurate core temperature reading, Stuart-Hill said, the technology should be used to monitor firefighters responding to calls. However, she said, the $50 cost of these types of pills is a deterrent for most departments.

As a lower-cost, lower-tech alternative, departments could use the heat-stress wheel developed by Defense Research and Development Canada to give people who work outside a rough estimate of how to minimize heat stress. The field guide works like a sliding ruler, which allows the user to factor in the temperature, humidity and work intensity to estimate heat stress levels.

Much of the technology to keep firefighters safe in extreme conditions already exists. “The technology is there, it is just about implementing it into the fire service,” said Williams-Bell.