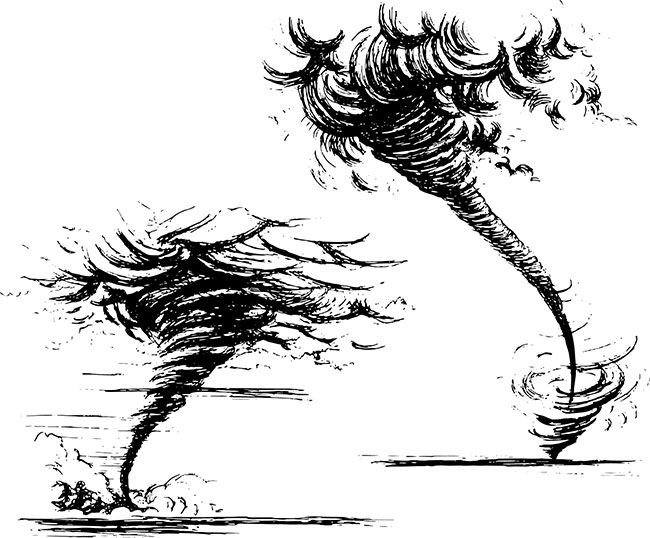 Two tornados touched down in our village this summer, making it an even more unusual summer that 2020 was already set to be. Photo: roman bykhalov/Adobe Stock

The summer of 2020 was a different one for all of us for many reasons. We faced new rules and regulations that the entire world was forced to come to grips with. A global pandemic caused the world to stay at home. A virus changed the way our dispatchers took emergency calls by adding COVID-19 screening questions to their script. Our tiered medical program changed the way we donned our personal protective equipment and we added mandatory N-95 masks, glasses, and shields as well as a disposable suit to every medical call we responded to.

This summer was also one that we would like to forget because our small town was the site of two tornados that touched down approximately 40 days apart. The first one in early June was classified as an EF-1 with wind speeds topping over 130 kilometres per hour and hit the outskirts of our village. The second came in late July, an EF-0 that did damage inside the town limits.

The town and area were fortunate in the sense that there were no reported injuries. The first tornado in June caused extensive property damage as two barns were destroyed and equipment was tossed around in the surrounding fields. Farmers had to relocate their livestock to neighbouring farms. Clean-up and rebuilding efforts started right away.

Our station was called to both tornado incidents with the initial reports of wires down and arcing. As firefighters, our primary function was to making the scene safe for traffic and pedestrians as well as maintain a safe working distance from the trouble zone. The waiting game pretty much ends when either the hydro company shows up or the roads department is nice enough to take over with the road closed signs and allow the fire crews to move on to the next area or return to the station.

When the second tornado hit in July, it touched down on a side street a few hundred metres from our main road in town. Thirty-foot trees were snapped in half and scattered around the entire neighbourhood. Shingles and siding were ripped from houses and large trees knocked down blocked streets, driveways, and front doors to people’s houses.

It looked exactly like what you would expect the aftermath of a tornado to look like. There was a clear path of destruction, a span of houses that were greatly damaged and further down the side streets you could see who was fortunate enough to have very minimal wind damage.

It was a very extraordinary display of Mother Nature and the force that can come with a weather system that a tornado brings. Utilities and power were knocked out for hours in parts of the community as the power company worked to reconnect the downed system.

One of the more impressive things that happened in both events did not have to do with the path the tornado took or how far it launched siding and toppled backyard treehouses and trampolines. It was the neighbourhood and town response.

When the second tornado struck the neighbourhood in the village, we were called approximately 45 minutes after it happened. We were on that scene for less than 40 minutes after checking for anything that would cause further problems like gas leaks or structure issues, but by the time we were packing our trucks up and moving on to the next area hit by the weather, neighbours and families of the homeowners had already put up ladders and made repairs to the rooves with tarps and spare wood and hardware. They had already cleared up branches and friends from all over town were in the area to see what assistance they could bring in the form of chainsaws and manual labour.

In the fire service we have a strong bond and unity with one another. We help one another in times of need and would drop everything to make things right again. This was no different than what happened this tornado wrought summer. Neighbours were gathering to see what could be done and to make sure their neighbourhood was returned to the closest to normal as possible. There was a sense of pride in their community. They answered the call and I am proud to be a part of this team.

Jason Clark has been a volunteer firefighter in southwestern Ontario since 2007. Having recently made the transition to captain from firefighter, Jason has had a new perspective on roles in the fire service and riding in the front seat. Contact Jason at jaceclark71@gmail.com or twitter @jacejclark.