It was a brisk morning in early spring when a conscientious jogger happened to run past a home where the smoke alarm was sounding. Through the early morning mist, he could hear the telltale beeping that signalled trouble. 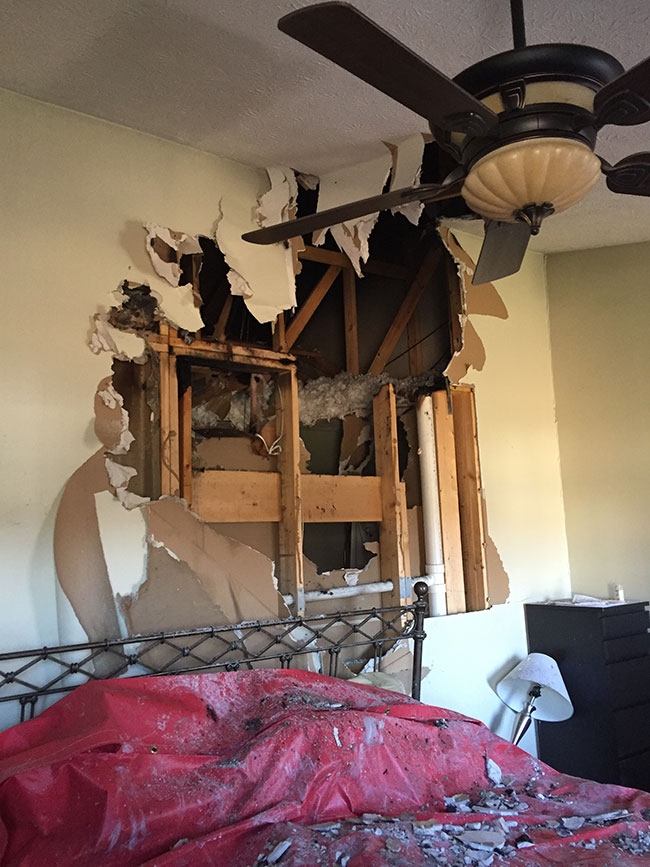 Efforts at protecting valuables before opening walls and ceilings will pay dividends for the fire victims in the long run.  It was a brisk morning in early spring when a conscientious jogger happened to run past a home where the smoke alarm was sounding.

He glanced from window to window, not seeing any movement from occupants on the inside, but also not seeing any signs of smoke or fire. Feeling compelled to investigate further, he ran around to the rear of the structure and instantly noticed a haze coming from the roof line above the second floor. The sight of the mist struck him as odd. Was it steam from the dew coming off the roof?  Was it a vent pipe from the furnace or a bathroom?  The wind shifted and brought the mist down to him – it smelled like smoke from a campfire!  A quick call to 911 brought the first due engine and truck from the local volunteer fire department that had just cleared an accidental fire alarm across town minutes earlier. Before the rest of the mutual aid first alarm working fire assignment had even answered the call, the engine and truck were on the scene with conditions found as they were dispatched. The excitement of light smoke showing meant that some good work was about to unfold. That excitement was quickly dowsed as it only took a second for each member on scene to realize that this house belonged to a brother firefighter that they knew had just left for vacation.

Simultaneously, as the truck captain dismounted the cab, the ‘irons’ firefighter was setting up to force entry, the engine crew was stretching their attack line, and the truck chauffer was setting the tower-ladder bucket down to the ground in case a crew needed to access the roof.  When the ‘irons’ had control of the front door, just before going in, the truck captain reminded all the firefighters in earshot that this home belonged to one of their own: “Let’s do this right!” The interior revealed light smoke on the second division with some scorched drywall and a few burn holes visible on a drywall seam on the ceiling of the master bedroom – it was an obvious contained attic fire. Primary search was negative. When the nozzle made it to the second floor, the truck captain said, “Remember, this house belongs to one of ours, not a drop of water flows until we get this place tarped!” Salvage covers from both the engine and truck quickly arrived and all hands scurried to work, securing the property and preventing further damage to the belongings.  Once that was done, the fire was quickly brought under control and extinguished.  The ceilings and upper walls in three rooms and a hallway had to be pulled during overhaul.  Because of the salvage covers, it was done with minimal damage to the remainder of the home’s contents.

The story above is one of my favourites to relate when I’m instructing a fire class on truck company operations. I was the truck captain who made sure that property and belongings were preserved before we made a mess of the place by putting the fire out.  We did salvage before we put the fire out. I wanted to make sure we did our best to do good for a brother firefighter. After that fire, my eyes were opened wide by my own actions and statements – why don’t we extend the same consideration to every property owner at every fire?  I think the answer is because it isn’t much fun to do salvage.

Almost every firefighter has heard of salvage; it often happens with overhaul. Overhaul is fun; we get to break things!  The topics of salvage and overhaul are taught alongside one another in recruit fire academies. Overhaul is the opening up of walls, ceilings, furniture and fixtures after a fire is knocked down in order to look for and extinguish hot spots and fire extension. It is done after the bulk of the fire has been extinguished. Salvage is securing or removing property to prevent initial or further damage from the effects of fire and smoke, or from firefighters doing their jobs.  It can happen at any point at which it is safe to do so. In reality though, oftentimes as we are overhauling, if we notice something valuable that can be saved, we’ll take it out or cover it to prevent further damage.  We can do better than that.

For me, my attitude on salvage was changed in the days and weeks following the fire in that firefighter’s house. Hearing the family’s stories of how little of their belongings were damaged due to the fire really did it for me. Their house was moderately damaged; they required alternate housing for five months while repairs and restorations were made. But they were able to do it with their stuff. None of their ‘irreplaceables’ were damaged or destroyed.  Baby pictures, wedding albums, scrapbooks – all were intact. That felt good.

Salvage won’t happen by itself.  It has to be a mindset from the top down in the organization. I am in no way advocating or promoting that salvage should take precedence over a safe and co-ordinated aggressive interior fire attack or search and rescue efforts. Water always wins!  But when we can, and when it is safe to do so, consider protecting what isn’t yet damaged. Cover it up!

Tim Llewellyn is a firefighter for the Allegheny County Airport Authority in Pittsburgh, Pa., and an instructor for a number of fire academies and training faculties. llewellyn.fire@gmail.com