I have often thought that the topic of firefighter training can be broken down into several distinct categories.

In my system of thinking, each category is unique from the others by the general timeframe at which the training is occurring in the firefighter’s career.

The first category is mentioned often in my Tim-bits columns – recruit school. Here, we are taught the basic fundamentals of firefighting theory and practice.

The next category occurs immediately after recruit school is complete. I call it probationary training. This unofficial and undefined period is where the boots meet the road, where new firefighters use the skills taught in recruit school and apply them to real-world situations and station life.

This is the period when the new folks learn there is the “book way” that they learned in school and the “real-world way” or the way it’s done at a particular firehouse.

This is often a time of great eye opening for the new folks when they realize that their pre-service education didn’t teach them everything they need to know.
With their opening-day jitters well behind them, the firefighters pass into my system’s next category – the continuing education phase. This category will encompass the remainder of their fire service career, if they choose to dedicate it to constant learning and improvement. Here, the firefighters will have an opportunity to expand and fine-tune their knowledge and skills in engine-company and truck-company functions, vehicle rescue, other technical rescue specialties, firefighter survival, RIT, driver-operator, fire instructor, fire officer, etc.

One thing important to note about my system of training categorization so far is that it focuses on the individual. The individual takes courses and certification examinations to hopefully become increasingly more capable at various incidents. Fire departments, in turn, embrace the individual who has the determination to learn more and foster that education by holding regular company-level drills that build teamwork and allow individual firefighters to develop into more effective teams.

But my department found that these two to three hours just weren’t enough to give our firefighters what we desired. By the time we get into things, it’s time to clean up and go home.

We realized there were two things missing with our weeknight drills – more time to train and live fire. We quickly realized that the most dangerous thing we were asking our firefighters to do was something we hadn’t trained them on for a long time – fight interior structure fires.

We contacted our local fire academy and enquired about running day-long training for our department using the academy’s facility and its class-A burn building. It was determined that since we only wanted to commit to a single, eight-hour day, none of the standard fire academy classes fit our needs. The academy agreed to rent its facility so we could conduct live-fire training that fell into compliance with NFPA 1403, and it agreed to provide the instructors and fuel – at a relatively low cost.

We picked a weekend day a few months out and met and worked with the instructors to develop a curriculum.

Once finalized, the morning schedule included topics on basic fire control, search and rescue practice and pressurized watercan use.

The afternoon schedule consisted of realistic scenarios that mimicked a few of the fires that we had faced in recent years.

During the morning schedule, we made sure everyone had an opportunity to practice the fundamentals of what we expected of them at real fires – all that they had learned in their recruit, probationary and continuing educational periods.

The afternoon scenarios put it all together. The scenarios were run as “roll-in” drills, with an actual dispatch and staggered response of the apparatus – just like it happens in real life.

Because we had instructors to manage the safety and instructional aspects of the drills, our company and chief officers were able to focus on their incident command and company leadership skills. We had created an opportunity to train as we actually fight fires – but in a controlled and relatively safe manner. Our firefighters did it our way, as a cohesive and familiar group.

The day was a great success. If a fire academy training facility is within your reach, I encourage you to look into setting up a departmental-level training and development day.

Tim Llewellyn is a firefighter for the Allegheny County Airport Authority in Pittsburgh, Pa., and an instructor for a number of fire academies and training faculties. Contact Tim at llewellyn.fire@gmail.com.
September 17, 2018By Tim Llewellyn 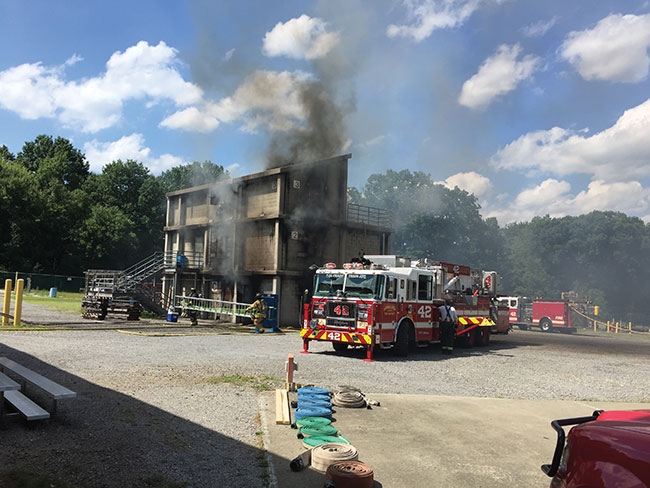