The dispatcher’s voice crackles loudly over the pager through the late-night silence: “Possible structure fire, 2 Gilkey Dr. – Penn Mar Plaza in Mars Borough. Caller on the 7th floor can hear smoke alarms going off and reports black smoke filling the hallway – unable to evacuate. Responding units will be Engines 42, 19, 20, 21 and 22, Truck 42, Truck 228 and Rescue 16 for the RIT. 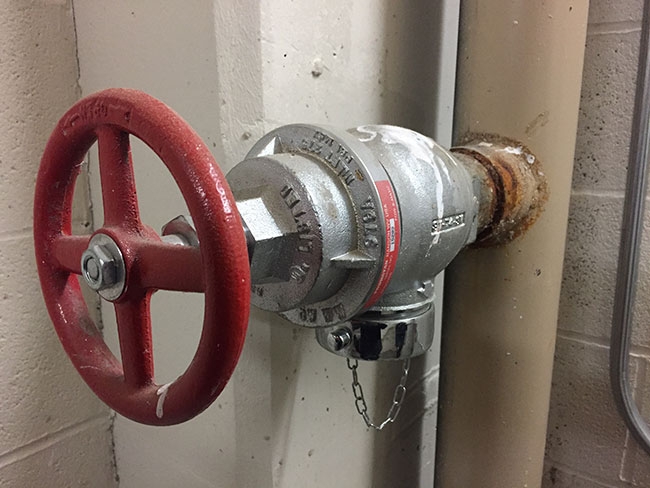 This class I standpipe connection with a pressure reducing valve was installed in 1994. It is expected to deliver roughly 500 gpm at 100 psi residual pressure. Many urban and suburban buildings are equipped with standpipes

Now receiving multiple calls . . . ” As the company officer rises out of bed and fumbles for socks to put on, one thought runs through her head based upon the first two parts of the dispatcher’s message – working fire on the seventh floor of an occupied mid-rise: “This is going to be a standpipe job.”

Many urban and suburban buildings are equipped with standpipes. Fire departments in rural areas may find commercial warehouse developments or other installations with built-in standpipes. Standpipes are basically three- or four-inch pipes installed in a building with outlets at defined locations that have the sole purpose of providing water for firefighting operations in areas distant from the fire apparatus – most commonly a vertical distance away. Standpipes can be supplied with water from the municipal water supply (or a water reservoir) by a fire pump installed in the building, or by fire apparatus on a hydrant connected to the building with hoses through connections on the outside of the building.

There is debate in Canada and the United States about what size hose should be used to connect to a standpipe for fighting fires. Many departments have great success and hold true to 65 millimetre (2.5-inch) hose and smooth-bore nozzles, while others have had success and find preference in 45 mm (1.75-inch) hose and combination nozzles. While there are many things to consider when choosing fire hose for standpipe operations, there are two facts that must be taken into account: NFPA 14; and the age of the building.

In 1993, the pressure requirements for standpipe systems were increased by the consensus standard, NFPA 14: Standard for the Installation of Standpipe and Hose Systems. Prior to 1993, the standard required standpipes to have a minimum residual pressure of 65 psi. These systems were designed for 65 mm hose with a smooth-bore nozzles; they were not designed for 45 mm hose combined with 100 psi fog or even 50 psi smooth-bore nozzles. The friction loss of 45 mm hose and the pressure requirements of even a low-pressure combination nozzle are greater than the system’s capacity. There is even greater danger in utilizing automatic fog nozzles, as demonstrated in Philadelphia Fire Department’s deadly One Meridian Plaza fire in 1991. The result in using an automatic or combination nozzle could be a dangerously low flow nozzle stream with poor reach and stream pattern.

In the 1993 edition of NFPA 14, the residual pressure requirements were increased to 100 psi. Many  believe that this change permits the use of smaller-diameter hoses and lower-pressure fog nozzles for standpipe operations. While many fire departments have had success with this type of hose set-up, there may be a misconception. Let’s look at the pressure calculation. The standpipe is designed to give 100 psi; a typical low-pressure fog nozzle requires 75 psi to achieve the desired flow rate. A 45 mm hose (typically) has a friction loss rating of 26 psi per 30 metres (100 feet). Standpipe hose packs are usually 45 metres (150 feet) long. The math: 75 psi nozzle pressure + 39 psi friction loss = 114 psi required. By design, the standpipe offers only 100 psi for use – 14 psi short. The result is that the low-pressure nozzle that requires 75 psi would get only about 60 psi and would not have the gallons-per-minute flow rate or stream reach that is normally encountered and expected. If this were a pre-1993 code standpipe, the hoseline would be 49 psi short – very under pressurized.

Changing only the fog nozzle to a smooth-bore nozzle (50 psi required) alters the math favourably: 50 nozzle pressure + 39 friction loss = 89 psi.  The smooth-bore nozzle set-up offers a surplus of pressure – 11 psi – which will increase the total gallons per minute available to put out the fire.

For 65 mm hose and a smooth-bore nozzle combination, the math works out even more favourably.  Using the same calculations, the improved friction-loss characteristics of 65 mm hose (15 psi per  30 metres) combined with the low operating pressure of smooth-bore handline nozzles (50 psi), the surplus pressure rises to 28 psi.

Whatever combination of hose and nozzles your department chooses to combat fires in buildings with standpipes, there must be careful consideration given to the factors involved before the fire starts. In the July edition of Tim-Bits, I will introduce a method of storing and deploying 65 mm hose from a standpipe that works for many fire departments and might work for yours.

Tim Llewellyn is a firefighter for the Allegheny County Airport Authority in Pittsburgh, Pa., and an instructor for several fire academies and training faculties. llewellyn.fire@gmail.com