In the October edition of Tim-bits, I focused on a method of leader-line deployment that has served our department well; its versatility and ease of use has found favour with our firefighters when it’s necessary to extend attack lines. 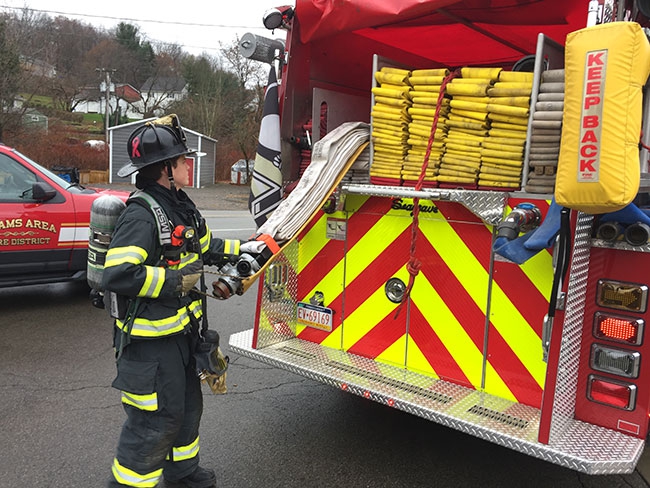 For review, our department’s leader lines in the hose bed consist of 10 or 12 lengths of 78-millimetre (2.5-inch) hose, flat-loaded, so that a male coupling is on top with a water thief attached. The entire first section is to be pulled off; the water thief is bundled together with straps. The purpose of the bundled section is to ensure there is a nominal amount of hose with the firefighter when it is pulled off and the apparatus drives away (in the reverse-lay function). This system guarantees that one section of hose is free to be extended from the street into a yard, alley or other spot closer to the fire attack area or entry point. The bundle also aids in forward leader-line advancement; bundling the hose makes it easier for one firefighter to pull off and shoulder away from the fire engine, while other firefighters strip off and carry or drag additional hose. It should be noted that the top section of leader lines do not need to be bundled. The bundled hose was introduced in our department, and worked for us, so it was adopted.

During structural incidents, when interior fire attack is indicated and a leader line is called for, the positioning of the water thief in relation to the entry point is vital: we make a point of including this detail in our training. The water thief must be placed no closer than three to 4.5 metres (10 to 15 feet) from the front door and, most importantly, to the side of the door. The purpose of the three to 4.5 metre distance is to help prevent kinks in the attack-line hose at the water-thief connection. The offset placement allows the attack hose to be flaked out perpendicular to, and directly in front of the entry door; this allows for the easiest stretch possible with minimal snag points. When the attack-line bundle is laid on the ground and connected, it should be just ahead of the water thief; this placement  helps to keep the coupling connection as straight as possible to
minimize kinking.

Our department’s leader-line attack bundles consist of two sections of 1.75-inch hose with a 7/8-inch smooth-bore nozzle. The hose is flat laid in a single stack and held together with a few cheap nylon straps. Each fire engine carries two of these bundles; they lay on top of the leader line, next to its bundle in the hose bed. The bundle is laid on the ground just in front of the water thief, perpendicular to the entry point. To keep training methods and muscle memories consistent, we flake the leader line’s attack hoses at the front door the same as we do with our pre-connected shoulder loads. After the straps are unbuckled, the female coupling is attached to the water thief where the middle coupling in the attack hose is located. This coupling is then picked up and carried away from the entry point until all of the flakes of hose in the bundle are extended. The coupling is then carried back toward the entry point and laid next to it. This action creates two easily managed loops of hose, each approximately 7.5 metres long, in line with the entry point. The hose is now ready for charging and advancement.

A leader line is an effective tool that has multiple roles in fire suppression. But stretching leader lines and advancing attack lines from them is quite different than bread and butter pre-connected cross lay hose lines. If success is desired, the methods must be practiced. There’s an idea for your next company drill – leader lines!

Tim Llewellyn is a firefighter for the Allegheny County Airport Authority in Pittsburgh, Pa., and an instructor for several fire academies and training faculties. llewellyn.fire@gmail.com