May 2, 2016, Mayerthorpe, Alta. - A firefighter who battled the flames that destroyed a railway trestle bridge northwest of Edmonton last week has now been charged with setting the fire, as well as others in and around his community. 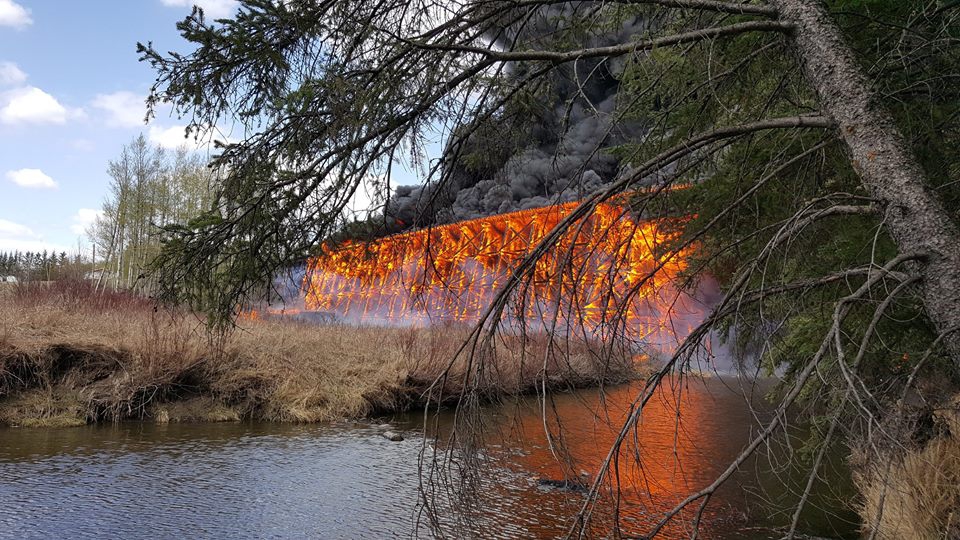 A railway bridge near Mayerthorpe

RCMP say Lawson Michael Schalm, 19, of Mayerthorpe faces 18 counts of arson following an investigation into a recent rash of fires, including the one on the CN bridge on April 26.

The chief of the town’s fire department, Randy Schroeder, says Schalm is the son of a former mayor of Mayerthorpe and joined the department as a junior member when he was 15.

He became a full member when he turned 18.

Schalm is being held in custody and is scheduled to make his first court appearance on the arson allegations in Stony Plain Provincial Court on Wednesday.

Schroeder confirmed that Schalm was among the firefighters who fought last week’s fire on the bridge.

“The entire department is shocked and in disbelief right now regarding the situation,” Schroeder said on Sunday.

Thick, black smoke billowed from the burning railway bridge for hours until it collapsed. Students at the nearby Mayerthorpe high school and residents of 38 mobile homes at the Kreek’s Krossing trailer park were forced to leave.

Water bombers, along with fire crews from Mayerthorpe and surrounding areas, battled the blaze.

Police say no one was hurt in any of the suspicious fires, which began April 19.

Schroeder and Mayerthorpe mayor Kate Patrick said in a news release that members of the fire department will undergo “Critical Incident Stress Debriefing” and that individual counselling will be available to all members over word of the charges.

Schroeder said the community’s firefighters are volunteers who are paid on-call.

The release said firefighters “volunteer tirelessly” and that all who were available stepped up during the rash of fires.

“Our community can continue to expect the highest possible service from its fire department and town officials,” the release states.

“The fire department will continue to respond to emergencies and will respond to calls.”