A tale of two kidneys

Selflessness in the fire service.

Kyle Schmidt was a healthy firefighter for a decade — and then he wasn’t.

A volunteer turned career firefighter with Winnipeg Fire Paramedic Service, he was diagnosed with the kidney disease IgA nephropathy in 2010. In Schmidt’s body, an antibody called immunoglobulin A (IgA) had built up in his kidneys, impacting their ability to filter waste from his blood. For nearly another decade he was monitored and treated for this incurable disease. In 2018, his bloodwork began to show a rise in creatinine levels. Since the kidneys remove creatinine entirely, a rise indicated a worsening progression of the disease. He began dialysis in 2020. No longer able to carry on his active firefighter duties, he took an office role in fire prevention. He and his wife welcomed a baby daughter during this time, and Schmidt welcomed the silver lining of being home at more regular hours than he was in his previous role to see her grow and be there each night to put her to bed. But his health was in peril.

Schmidt had kept his disease largely  private up to this point, but it was becoming painfully clear he needed a kidney transplant.

“I had too much pride — I just kept this big secret. Nobody knew about it. And then my wife basically said, ‘Well, you’ve got to say something because you need a kidney.’”

With his wife’s encouragement, they wrote a letter to campaign for a kidney and shared it across their social networks and with fire service organizations.

News of his disease circulated to Russ Reimer, an assistant chief with Steinbach Fire and fellow WFPS firefighter, via a water cooler conversation with another firefighter who had heard about Schmidt’s plight. Schmidt had worked with Reimer as fellow instructors over the years. They are both represented by United Fire Fighters of Winnipeg L867. Though they both worked for WFPS, they were on separate platoons and didn’t know each other well outside the times they taught together. Reimer still remembers the moment he heard the news of Schmidt’s failing kidneys.

“I turned around on a set of half steps. I can still remember exactly where I was standing. And I said — and it’s funny the way I worded it to him — because I said something interesting. I said, ‘You mean my Kyle Schmidt?’”

Reimer texted Schmidt to confirm he was indeed as sick as the water cooler conversation conveyed, and immediately, without giving it further thought, he messaged him back: “Well, I’ll give you my kidney.

With his wife’s support, Reimer called the Living Kidney Donor Program. He was convinced he was destined to be Schmidt’s donor; his conviction was very strong. Reimer is the president of the Manitoba chapter of Firefighters for Christ, and a board member of this California based international organization. He said his faith contributed greatly to this sense that he was meant to be the donor. Reimer’s blood type is O negative, making him what is commonly known as a ‘universal donor’ because anyone can receive red bloods cells from this type, and that was the first lucky strike. He did further tests with the Living Kidney Donor Program. Then he was called in and told that they were going to go with someone else, and there was another back-up behind him.

“I was just sinking in the chair as they were speaking to me, and I didn’t want to show them I was disappointed. I thought, well that’s not the story I want. I went on a journey of selfishness. There were things I needed to let go of. I asked them to keep my file and let me know if there were other citizens that needed a kidney.”

Months later he got a phone call from the program. He was told his file was reviewed again, and genetically he was an ideal match to donate to Schmidt. Reimer was confused, as he was already told he wasn’t going to be the donor, but the match numbers were so ideal that he went to the top of the list. Because the word “perfect match” was used, Reimer said he asked for clarification.

“What do you mean a perfect match? This wasn’t the blood type. This is the match number that Kyle was talking about for the longevity of the kidney and the best chances of it taking in his body without rejection. And she [from the program] said to me, ‘it’s as though you guys are almost the same person. So, when we match you, it’s just seamless.’

Reimer wondered how rare this perfect match was. He said he was told that it was extremely rare for two random people with no family ties whatsoever to match this well. His was shocked by what long shot odds had just come to fruition.

But the road was still fraught with obstacles. Reimer failed blood pressure tests to the point where he said the program was ready to move on to a back-up donor (he gets test-anxiety). Finally, the results coalesced; the moon and stars aligned. He got the call on April 12 that he would be going in to donate his kidney to Schmidt on May 12. 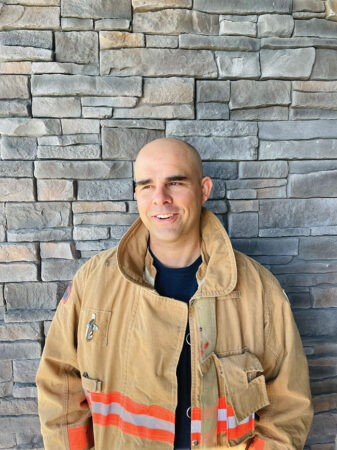 On May 12, Schmidt got on the operating table a sick man and woke up almost immediately healthier. Within hours his creatinine levels dropped dramatically and continued to fall. Six weeks on, he was no longer hooked to a machine nine hours a day. He was doing yard work. He started swimming again. He saw the blessings of food and support brought by friends. He and Reimer talked daily. Reimer, who climbed on to the operating table a healthy man, woke up sick and in pain, his body adjusting to the loss of a major organ. Post-surgery, the remaining kidney will function at 50 per cent and then over time will learn to work harder, reaching a healthy functioning 70 to 80 per cent and the donor will not feel any different. Reimer said he hadn’t considered the recovery at all going in, and it has been a tough one. But he said he would do it all over again. It was all worth it. 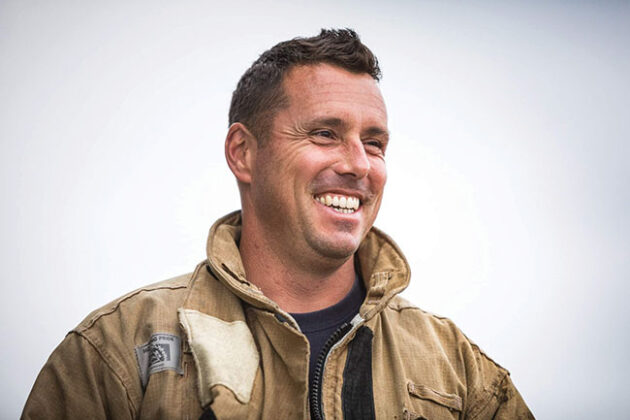 Russ Reimer turned out to be an ideal genetic match and organ donor for fellow firefighter Kyle Schmidt.

For Schmidt, he has a new perspective. “Once you realize what really matters in life, you just step back…It’s been a blessing in so many ways.”

Schmidt and Reimer are part of the UFFW L867 IAFF union, and president Tom Bilous had this to say of the two firefighters:

“Firstly, on behalf of our 1500 UFFW members, I can say that we are all extremely pleased that Brother Schmidt and Brother Reimer are recovering well! Everyone is relieved to learn that they are both on the road to good health and should be returning to the job soon. Secondly, this noble and selfless act that has occurred here, really is in keeping with what are some true core values of firefighters. Courage and always having each other’s backs. They truly exemplify both. We are very proud of these guys. Theirs is an amazing story that will now bond them well beyond any uniform. They are part of our extended fire fighting family. We absolutely look forward to having them on the rigs with us and wish them long healthy careers doing what they love.”

Part of Schmidt’s journey has also been to spread awareness about organ donation. In 2020 he was interviewed by CBC News on the long wait times facing people needing kidneys in Manitoba. The WFPS Fire Chief Christian Schmidt [no relation], said “It never ceases to amaze me how often we see our first responders taking care of each other. The Winnipeg Fire Paramedic Service as a whole has amazing people, and this is just another example of the commitment our members have to one another. Kyle and Russ exemplify this commitment and their actions now will now increase public awareness on organ donation, most certainly helping to save more lives.”