Q At what point did you realize the magnitude of the incident and the potential for a media circus? 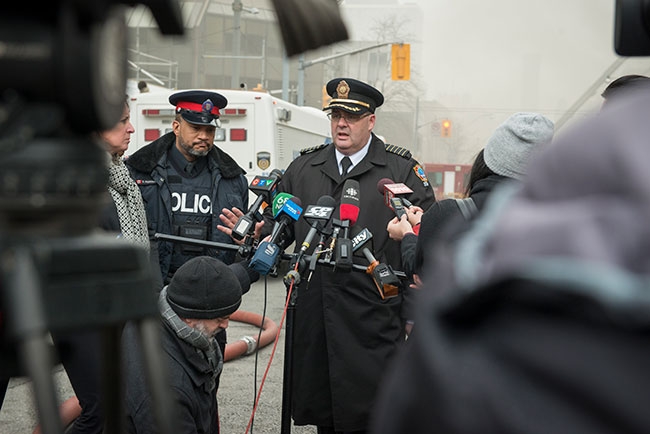 A I recognized it immediately upon arriving. We were in senior-management team meetings at headquarters and, of course, all of our team gets notified once a call goes to a second alarm, and notifications recur once it goes to next alarm level; it went from two to three to four in a matter of minutes. A division commander responds on a third alarm and the on-call deputy goes on a fourth – that was Deputy Chief Jim Jessop. Within 10 minutes it was at a fifth alarm. Once it goes to fifth I’m notified formally.

One of the first things Jim did was connect with the command post and then co-ordinated the media that was already there and arranged for an 11 o’clock scrum; Jim called and said they were at the north-east corner of Yonge and St. Clair. Basically when I arrived and knew how extensive it was and how impactful it was going to be, and the extent of the smoke migration – I knew at that point this was an incident where a lot of success was going to be based on our ability to communicate with media and, through them, with residents.

The last thing I said in each scrum was to advise the reporters when I would be back for the next scrum. I met with them every hour until 10 o’clock at night, then again at 6 and 7 the next morning. After the 7 a.m. scrum, I handed on-scene media off to my senior command team and went to council for budget all day.

Q This incident happened at one of the busiest intersections in Canada with cars, pedestrians, street cars, a subway system and tens of thousands of residents and commuters. How did you control the messaging to and use the media to your advantage?

A It was very obvious there was going to be a very significant impact on a lot of people. I didn’t know initially that the incident would affect the subway but it ended up being affected because of smoke. For operational reasons we had apparatus parked across street-car tracks , the subway was closed, the streetcar was shut down and a lot of people were affected. My priority was to leverage the expertise and partner with the media – the print and broadcast media on scene and also social media to keep the residents in Toronto and to give all of the stakeholders, such as elected officials, timely, accurate relevant information.

The overarching principle for me was to do my very best to give everyone a sense of calm – to let people know this is a big incident but we’re OK. My goal was to do the very best I could do to be that voice.

Q Did you have assistance from corporate communication and Toronto Fire Services media division?

A Two groups managed a nearly unbelievable amount of information: one was strategic communications (our corporate communications division) and the other was Toronto Fire Services; that let me focus on being able to meet the needs of all the media that were on scene and stay as connected as I could with a significant number of people on social media. I was tweeting on my own account (@ChiefPeggTFS) and our public information officer(s) were managing the @TorontoFire account.

My goal was to connect with people in language they understood and provide information that was relevant and important; that ranged from simply letting people know what was going on to referring people to resources to let them know how their commute was going to be impacted, and to get information to those who were evacuated.

We have such a luxury today because in 140 characters I can reach thousands of people instantaneously. That’s the only time in my life I actually got a tweet from Twitter to let us know that we were trending globally.

Q You posted hundreds of tweets and re-tweets between about 10 a.m. and midnight. Specifically, what was the impact of your presence on Twitter?

A It’s very easy for us to not think about an incident beyond the fact that it’s a fire in the city in which we work, but the reality is this was international news; there was a significant volume of interaction on social media with people from the United States and even the U.K. – a lot of interaction from well wishers, just people saying I hope you guys are all OK and will be safe – a lot of interaction from fire-service colleagues to say we’re watching and you’re doing great, and keep up the great work with the media – to just general interest, to getting a message from someone saying I was evacuated out my apartment how do I get my cat? I really believe it gave people the ability to be put at ease because the [constant communication] gave people the ability to ask the questions instead of being behind the yellow tape and not having anyone to ask.

Q Because TFS is such a large department you were not the incident commander; did you know going in that your role would be so specific?

A My role at that incident was to first be the connection point, the face and voice of Toronto Fire, to communicate openly and transparently with the three million  people affected by this fire; and, at a large-scale incident like this in a big urban city, my job is to be the face and voice of calm. The whole city’s on its ear, and there’s a lot of angst because people are stuck in subway stations, the street cars aren’t coming, the buses aren’t coming, and people are angry.  My job is to say it’s OK to be frustrated, and it’s important to me and I’m going to be very candid about why that is. Today, more so than ever, connecting with media and people needs to be a component of the incident command system – it is as much a priority as the tactical priorities we’re demanding through the ICS process.

An incident this big in a city this big could be the equivalent of a significant fire in a small town; my advice to chiefs is to consider that the media needs to be incorporated into your incident action plan. I have the luxury – I don’t have to be the IC – I had two command posts full of people; but if I didn’t have that luxury, it would be part of my responsibility to figure it out and fulfill that role.

It is a mistake, based on what I’ve seen, to ignore that communication role. We didn’t have issues with media self deploying to unsafe places, for example, to take pictures, because I gave them my commitment that I would be there to update them, and I was; it was a top priority for me to honour my commitment. If I told them I would be there by 3 I was there by 3. I’ve seen it in the past where we disrespect the business cycles of the media and they’ve got live feeds scheduled or deadlines and we blow them off, and then that’s not co-operation and I need them to co-operate with my rules and they need commitments; we both were able to get what we needed.

We changed the media perimeter four times; the wind was fairly strong and the direction was changing a lot. When the wind gets whipping through the highrises . . .  managing the smoke migration was very difficult.

Q Everything went as well as it could have; still, what lessons were learned?

A Our lessons learned were positive reinforcement. As much as it was a priority for me – and it became almost my entire priority – I didn’t even really appreciate the magnitude of how important that media and social media were until the next day. We were going to be international news at that fire anyway – but I guess what I realized in retrospect, you’re going to be international news but is that going to be a negative or positive thing for your organization? I’m pretty proud of the way our whole organization managed the media interaction. I think I underappreciated how powerful it is when you sincerely just thank your people for doing a good job. The media was really happy just to hear someone in uniform just be human. They asked how is everyone and I was able to say we’re tired, we’re beat up but we’re OK. We had no loss of life which, given the location and the magnitude of the incident, was a huge achievement. I have the deepest respect for all of our command team and all of our operations personnel to operate a scene that big in nearly zero visibility for 15 hours, and the worst injury we had was a twisted ankle.

Q We know from other significant incidents that it’s best to engage the media and manage the message rather than isolate reporters, who will then find other sources of information. How did you do that initially?

As the day went on we had a number of times when due to changing conditions we had to widen the evacuation perimeter. I was able to walk out of the command post and go to the media area and of ask if any of them could go live right now, and within two minutes they’re going live right now; they were able to go live on CP24 say we were widening the evacuation area and indicate that if you are in that area we need you to move.

I didn’t feel like a needed to manage the media; they were part of our team.