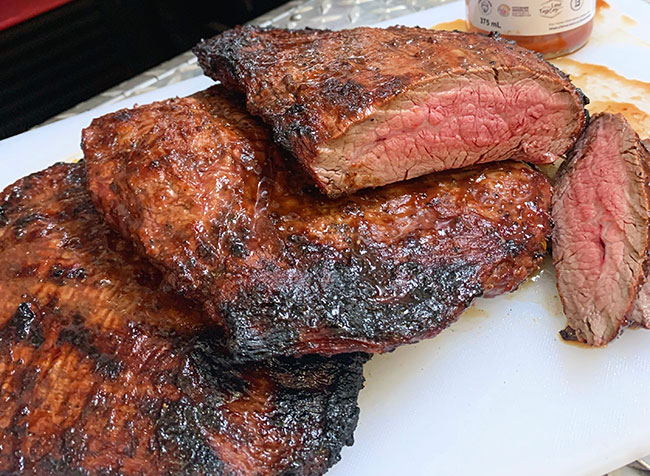 There is much to love about summer, but for me there is no better way to cap a sun-soaked day than firing up the grill for dinner. Of course, as firefighters we love fire, but there is just something primal and social about cooking over open flame. No matter what you are about to throw on the grill there is no easier way to build flavour into it than by using a marinade. Being able to build a marinade is a pretty simple and essential tool to have in your tool belt. Using a marinade is an easy way to boost the flavour of lean proteins, infuse flavour into vegetables or ensure tough cuts of meat will turn out tender and juicy. Even 15 minutes of soaking time is enough to enhance the flavour of many ingredients. The best part? It is super easy to whip together, and you really do not need any special equipment. It can turn you from a zero to hero on the grill!

So, what makes a marinade, a marinade? A marinade is a flavourful liquid that is used for soaking meat, poultry, seafood and vegetables. It tenderizes the surface of the meat while also infusing it with extra flavour. All marinades share a few key parts: oil, salt and acid. This is your basic marinade blueprint. Oil lets the marinade ingredients stick to the food’s surface while salt helps the meat retain moisture. The acidic component—like vinegar or citrus juice—tenderizes the meat’s surface by breaking down tough muscle fibers and the acid is also what gives that pop of flavour. If your food ever tastes dull or bland, it is more than likely missing the acid component. After these three basic components of the marinade is where you can build on your different flavourings to make it special in its own way. Several flavouring ingredients can be added in combination to boost your marinades, like spices and herbs, vegetables like onions, garlic and ginger, or condiments like Worcestershire, soy sauce, ketchup and mustard. These components might not be able to penetrate into the inside of the meat, but they will stick to the surface after the meat or vegetables are removed from the marinade. It is also helpful to use ingredients like sugar, honey or maple syrup because they help promote browning and caramelization as ingredients cook. What a marinade won’t do is season the inside of a large cut of meat; unlike a brine, it can’t penetrate much further than a few millimeters below the meat’s surface but it can break down tough proteins on the meat’s surface, and the oil used in marinades helps the flavourings stick to the meat’s exterior.

Is marinating necessary? It might not be necessary, but it is a good idea when working with tougher cuts of meat and lean proteins. Certain cuts of beef like flank and skirt turn out much juicier and more tender when marinated overnight. Lean proteins like chicken breasts and shrimp can turn out dry and bland when cooked without seasoning. Marinating gives them extra fat from the oil and the seasonings coat the exterior to boost their flavour. Tender vegetables like zucchini or eggplant are also great targets for a marinade. When cut into small pieces, they will soak up the flavours of the marinade effectively, making them stars on the grill.

The only thing you really need to build a marinade is a suitable container. I like to use plastic sealable bags that allow you to shake the contents and evenly disperse the marinade. If you want to get really fancy look to a vacuum sealer for quick marinating jobs. Vacuum sealing lowers the pressure inside the bag, allowing the meat to absorb the marinade more quickly. A common misconception is that the longer you marinate something the deeper the flavours will infuse. Actually, it is possible to marinate for too long and unfortunately there’s no coming back when you do. Marinades contain acidic ingredients that break down meat proteins. When the meat is exposed to the marinade for extended periods of time, it can become mushy and the texture will be off. For best results, set a timer and stick to these marinade times for most ingredients you might throw on the grill:

If you are into meal prep, most marinades can be made well in advance and stored in airtight containers or mason jars in the refrigerator. If you really want to plan ahead, make several batches of marinade at once and portion them into gallon-sized bags. You can freeze the marinade for up to six months, thawing the bag in the refrigerator before using.

Below are a few of my all-purpose marinades, so you can use them for meat, poultry, seafood and vegetables. To make these marinades simply mix all the ingredients together, pour in a sealable bag and toss in whatever ingredient you want to marinate, allowing it to rest it in the fridge. Feel free to add and play with different flavour combinations to make them your own. Enjoy my friends! Eat well and stay safe!

Patrick Mathieu is an acting captain at Waterloo Fire Rescue in Ontario. He was featured on Food Network’s Chopped Canada. You can reach Patrick at stationhousecateringco@yahoo.ca or  @StationHouseCCo.