What is it about a profession that makes it professional? What qualities do we look for when we define a vocation as having high levels of integrity and trust? 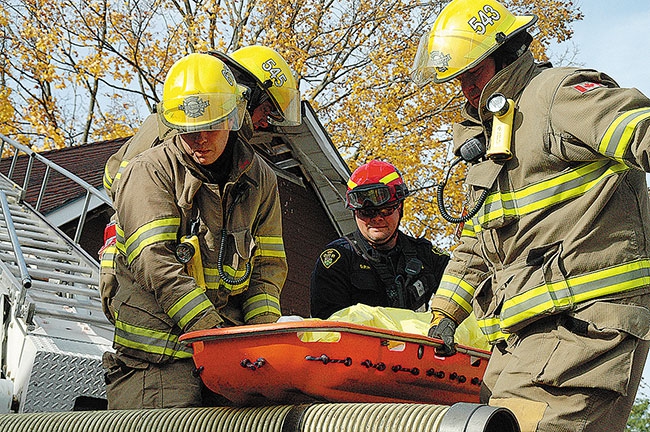 For firefighters, the answer is in the latest Ipsos Reid survey for Reader’s Digest released in January; 77 per cent of respondents rated fire fighting as the most trusted profession in Canada. Now, 77 per cent gets you only a B-plus in school, but in this case, 77 per cent rated fire as the top trusted profession in Canada, based on a survey of more than 4,000 respondents that is accurate plus or minus 1.8 percentage points.

That’s a pretty low error rate, so many Canadians will take the results as gospel. Just FYI, car salespeople and telemarketers are at the bottom of the trust scale with five per cent and four per cent respectively.

Of all the jobs on the survey scale, the police-officer rating really got me thinking, as the same code of ethics and commitment, and the same culture of laying your life on the line, exists within the blue brotherhood. Cops and firefighters are cousins on the urban battlefield with comparable line-of-duty deaths, injuries, stress and mental-health issues. With a trust rating of 46 per cent, our cousins with the badges are getting the raw end of the deal with a grade that would get a big, fat F in any school system. We all understand there are differences between cops and firefighters; the cultures are similar, but uniquely different, yet how is it that the gap in trust is so large? Is it just a slanted public opinion poll that is giving these officers a bad name?

Firefighters are a bit more flamboyant than police officers; we seem to like to flex our muscles in public a bit more with charity calendars, endless volumes of T-shirts, and stickers on our cars. We seem to have no problem telling everybody what we do because the reaction is almost always positive. We’re very proud of our profession and I make no apologies for our culture, as not many can do what we do.

Police officers, however, will rightfully defend their job choice to us as a higher calling, and they whole-heartedly believe that the box they checked allows them to give more back to the community – and to themselves – in so many ways. Think back to when you chose fire: Was it even close? Did you know why you wanted to be a firefighter over a cop? For me, it’s all in how you feel about this one statement: Do I want to get the bad guy, or go into burning buildings to save a life? Neither answer is right or wrong but both offer very different vehicles, both figuratively and literally, for accomplishing good tasks. The two skill sets, while similar in purpose, are very different in application. That’s why I have such a problem with the F rating for cops and B-plus rating for us; it’s not fair and it is definitely not deserved.

Police all across this country and North America have had a rough year with both the senseless shootings and multiple incidents during which police have had to shoot suspects to protect themselves and others in harm’s way. Sergeant-at-Arms Kevin Vickers, a former RCMP officer, became every Canadian’s hero when he shot and killed a man who had just committed an act of terror by assassinating Cpl. Nathan Cirillo on the steps of the National War Memorial in Ottawa on Oct. 22. I can’t think of one firefighter I know who would not shake that man’s hand, buy him a beer and call him a hero. I have no doubt that more than 46 per cent of the population trusts and approves of Mr. Vickers.

And if any of us had a chance to talk with Vickers about his actions, he would say he did his job, he did his duty, and any cop in his shoes would have attempted to eliminate the threat as he did, just as you would take a chance, push harder and fight to save a life under horrific circumstances as a firefighter.

Both professions are cut from the same cloth, so the difference in opinion polls has to come from stereotypes, an ill-informed perception of reality or, worse – blatant ignorance or discrimination. With a fraction-of-second decision-making process that may determine life or death for police officers, or for us, I think those who own that responsibility and choose to protect and serve deserve better than 46 per cent trust rating with a plus or minus 1.8 percentage point chance of error.

I’d rather run into a burning building any day, thank you very much.

Jay Shaw is a firefighter and primary-care paramedic with the City of Winnipeg, and an independent consultant focused on leadership, management, emergency preparedness and communication skills. jayshaw@mts.net  @firecollege
Print this page