In the January issue of Canadian Firefighter, I wrote about the Dash-Away – an innovative tool designed by a Sundre, Alta., firefighter to help mitigate issues in extrication, particularly in frontal offset collisions. I have since heard from readers asking why frontal offset crashes are so deadly. Most rescuers will have responded to a frontal offset collision. It’s important we, as rescuers, understand what the industry is doing to address the danger of these crashes. 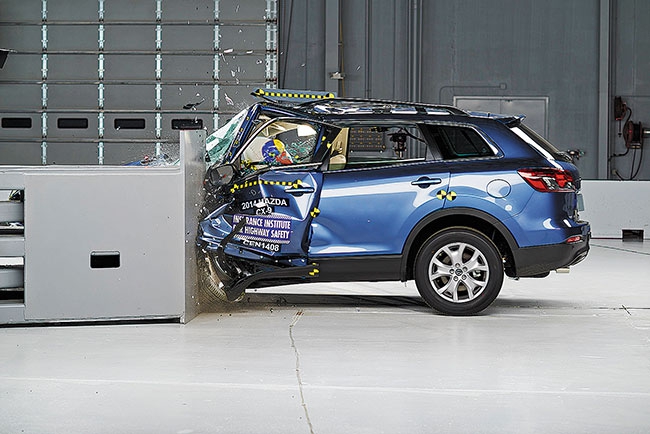 According to the Insurance Institute for Highway Safety (IIHS), an independent, nonprofit scientific and educational organization dedicated to reducing losses – deaths, injuries and property damage – from crashes on North American roads, 25 per cent of frontal-crash deaths are due to small overlap crashes. These overlap crashes occur when the front corner of a vehicle collides with another vehicle or object that encompasses roughly a one-quarter section of the front end. Most of these collisions are the consequence of vehicles drifting over the centerlines of roads or intersections and striking other automobiles. However, since speed, timing, and vehicle location on the road are all factors in a frontal collision, the precise point of impact is not always straight on with the other vehicle. Instead, what usually occurs is what authorities and experts refer to as a small offset frontal collision. These types of crashes, though considered small can be lethal.

A typical front end of a standard vehicle has specific crumple zones that are designed to collapse and absorb energy in order to divert the energy away from the passenger compartment. Side frame rails, hidden under the front fenders, are the main components of crumple zones, and are engineered to deform or collapse like an accordion. Other crumple zone structures comprise the middle 50 per cent of a vehicle’s front end. The crumple-zone design works well to protect passengers in the majority of moderate to low-speed crashes that are head-on or frontal. The degree of energy absorption varies depending on the style and size of the vehicle’s front end. Essentially, the larger or longer the front end, the better protected the passengers are as it takes longer for the crash energy to reach the passenger compartment, which allows more time for crash absorption.

In the case of a small frontal offset crash, however, only a portion of the front end – less than 25 per cent – hits the other vehicle or stationary object. This means the impact energy can bypass the engineered crumple zones in the side rails, which significantly reduces the absorption of energy from the crash (see above). Deceleration time decreases so the occupant space is compromised.

If the hit from the other vehicle or stationary object violently rotates the vehicle sideways, the occupants also move sideways and forward, which forces him or her out of the ideal position to benefit from secondary restraint protection – the airbag. When this occurs, occupants often miss the airbag entirely and hit A pillars, doors, windows, or the center console. As the impact starts to deform the cabin space, other changes take place inside the passenger compartment that greatly compromise the strength of the lower A pillar and firewall. The front rims/tires move inwards into the firewall, and the sheet metal seams between the floor pan and rocker panel begin to separate and fail, wrapping the crumpled sheet metal around the occupants’ feet and lower extremities. The floor pan deformation and movement often causes the seats to move forward or to the side, which forces the occupants out of position even further and can compromise the effectiveness of seat belts. In addition, the steering wheel moves inward, moving the angle of the steering column such that if the driver airbag deploys, the driver is not in position to benefit from the supplementation. The driver will be subject to severe head and facial trauma as he or she comes contact with the upper corner of the A pillar. Because an offset crash is still frontal in nature, the side-impact and roof-curtain airbags generally will not deploy to offer protection from the interior structures. All these problems contribute to excessive forward movement of the occupants.

Since 2012, the IIHS has evaluated new vehicles through tests for small overlap frontal crashes. The test propels a vehicle at 65 kilometres per hour into a 1.5-metre solid wall in such a way that 25 per cent of the vehicle’s front end on the driver’s side of the car strikes a barrier. A dummy representing an average-size man is positioned in the driver seat. The IIHS reproduces as well as possible the crash forces that occur when the front corner of a car or truck hits another vehicle or stationary object, such as a light pole, tree or roadside abutment. IIHS engineers rate the cars by considering three main factors:

The test is filmed from many angles inside and outside of the vehicle to give engineers a better overall idea of what transpires inside the vehicle during a crash.

David Zirby, the executive vice-president and chief research officer for IIHS, said in a YouTube video that small offset crash tests the IIHS performed on Nov. 20, 2014, using four minivans found only one of them to have an “acceptable” safety rating.

Other than test facilities such as the IIHS and a select few automakers, small overlap frontal crash tests are not conducted in North America or Europe. Therefore, manufacturers are not required to adhere to any federal motor-vehicle safety standards for small overlap crash tests. As a result, a major source of the 10,000 frontal-type crash fatalities in the United States and Canada that occur every year are from small offset crashes. (However, the IIHS believes the number of three-year-old or newer passenger vehicles involved in fatal frontal crashes has dropped over the past decade by more than 50 per cent.)

Automotive design changes needed
With small frontal offset collision tests revealing shortcomings in many automobiles, auto manufacturers are attempting to modify their designs. Some modifications manufacturers have made include a lowered steel rail, a new front-end geometry, new energy absorbing hollow bars under bumpers, strengthened bumpers for more energy dispersion, as well as changing the position of hard, heavy and dangerous components, such as the engine cradle and lower suspension. Lowering these dangerous components better disperses them underneath the vehicle and away from the passenger compartment, which is most vulnerable during a small frontal offset crash. As well, airbag makers and car companies are collaborating to try to rectify the movement of occupants out of proper position during an offset crash. Larger airbags that will cover  areas such as the upper corner of A pillar will offer protection from hard structures. Engineers at some car manufacturing facilities have indicated that they are adjusting airbag algorithms to deploy side airbags during small overlap frontal crashes to help fill the critically exposed gap created between the upper window and A pillars.

The IIHS believes it has helped make significant improvements to safety by providing consumers with information that they can use when deciding which car to buy. This information has helped drive consumer demand for safety and manufacturers have responded by making vehicles that exceed North American motor vehicle safety standards, thereby contributing to the mission of decreasing death and injuries from motor vehicle collisions.

Although consumer demand for vehicle safety information continues to grow, the National Highway Traffic Safety Administration – a division of the United States Department of Transportation that sets and regulates motor-vehicle safety standards – does not require small overlap crash tests.

Ultimately, there’s no perfect solution that guarantees safety in a motor-vehicle collision; driver prudence and cautious, safe practices behind the wheel are still the best bet for survivability. Improvements in vehicle and safety technology assist as well. Undeniably, modern cars are safer than ever, however, once they leave the road or cross over a median, all bets are off.

Randy Schmitz is a Calgary firefighter extensively involved in the extrication field. He is the education chair for the Transport Emergency Rescue Committee in Canada. rwschmitz@shaw.ca  @firedog7