The view from above: Using drones in Canada’s fire service 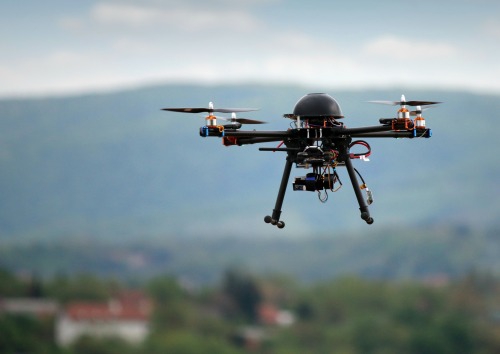 Callaghan is the fire chief in Erin, Ont., and a captain for nearby Brampton Fire and Emergency Services. His interest in unmanned aerial vehicles (UAVs) – also known as unmanned aerial systems (UAS) – was sparked, he said, when he learned about a not-for-profit search and rescue team in the United States successfully using drones.

“What previously took days can now happen in hours,” he said. “Send it up a couple hundred feet with a camera on it and we see exactly what the camera is seeing; so you can imagine how fast that makes the search.”

Callaghan acquired a personal UAV about two years ago and it now goes with him to many emergency scenes.

At the time of this interview, the chief was viewing footage collected by the drone from a fire that had happened days before.

“Right now we’re using it for the fire investigation,” he said. “We basically videotaped, via the drone, the whole fire scene. So now I can sit in front of a computer and watch that overhead video to look for the point of origin, what was in the building, all those kinds of things.”

In addition to fire investigation and record keeping, Callaghan said UAVs are the right option when an incident commander can not or does not want to send in firefighters because the environment is too hazardous or difficult to access.

The Burlington Fire Department in Ontario acquired a drone in March 2014. The following summer, the drone was used for a large incident on the Burlington Bay Skyway bridge when a dump truck ran into the overhead scaffolding.

Burlington Fire’s supervisor of training, Bill Hammond, piloted the drone during the incident. He flew it above the scene to give responders an idea what other vehicles were involved.

“We were able to determine that on the other side of the accident – which we couldn’t get to because of traffic – that we had two small, minor collisions,” Hammond said. “We would not have been able to see that without the drone.”

When not being piloted for large incident size-up, Burlington’s drone is used to record training sessions, for rooftop surveillance of structure fires, pre-incident planning, and post-incident analysis of large events for fire prevention and public education staff.

Basically, Hammond said, drones can be used for anything that would benefit from an eye in the sky, from size-up to search and rescue. And while many chief officers  agree with him, drones have been slow to catch on.

“I think it’s because the technology is so new to the fire service,” Hammond said. Department heads are likely questioning the cost, he said, particularly if they believe operating a drone will require a new position within their departments.

Other possible concerns are privacy and safety of nearby residents.

Are drones worth the cost and the risk?

The sky is not the limit
Drone use is regulated by Transport Canada, but those rules are changing as UAV use increases both recreationally and for work.

According to Transport Canada’s current regulations, those who operate drones commercially – fire department drones are considered for commercial use – must submit their contact information, UAV models, descriptions of operations and geographic boundaries of operation.

On May 28, Ottawa launched consultations into proposed changes to drone regulations, which would apply to UAVs weighing less than 25 kilograms. The changes were expected in August. (Find out more on Transport Canada’s website)

In general, Transport Canada requires that all drones, for commercial or private use:

Fire-department feasible?
A typical UAV that is not fire-service specific costs between $1,000 and $3,500. These drones are or can be equipped with cameras to broadcast real-time or record quality video. Models include the DJI Phantom and Inspire, the Draganflyer, the Solo from 3D Robotics, and the SkyRanger from Canadian company Aeryon Labs Inc., headquartered in Waterloo, Ont.

Illinois-based manufacturer W.S. Darley & Co. has taken a lead in bringing UAVs to the fire service. In 2010 the company introduced the Darley Stinger, which is able to carry heavier payloads of about 3.2 kilograms, strong enough for lights and larger cameras. The Stinger retails in Canada for upwards of $20,000.

This spring Darley introduced its newest drone, the InstantEye, in partnership with Physical Sciences Inc., at FDIC in Indianapolis. The smaller, lighter UAV model sells in Canada for about $10,400, and is loaded with fire-specific features, including battery fail-safes, three different plug-and-play cameras and wind resistance. For another few thousand, the InstantEye can be equipped with a thermal imaging camera.

Mike Mocerino, a robotics project manager with Darley, said the focus of the InstantEye model is on safety.

“(Other) systems are great for hobbyists, but on a professional level you need fail-safes built in,” he said. “If the battery goes dead, the unit is going to automatically go back to the operator and land . . . there are little things like that to make sure the user has control of the system.”

Darley works with Micmac Fire & Safety Source Ltd., to distribute the InstantEye in Atlantic Canada. All other Canadian sales and inquires go through Darley in the United States.

UAV training
According to Transport Canada’s regulations, UAV operators need to have training. While the type of training is not specified if the drone weighs less than two kilograms, most UAVs on the market fall between two and 25 kilograms and in that category the government requires operators to complete a pilot ground school program. Details are on the Transport Canada website.

According to users, however, it’s pretty simple to learn how to fly.

“Basically I could take you and teach you how to fly a drone in 10 minutes; that’s how easy it is,” Callaghan said. “Now that’s not going to make you an excellent flyer, but you’ll be able to put the drone up and fly in around.”

Hammond, too, said training was not difficult for Burlington firefighters; four members have completed the training and can operate the drone on scene.

“We didn’t require any specialized training,” Hammond said, although manufacturer DJI provided online virtual flying lessons. “Most of the training is in-service; going into fields and parking lots and making sure you are good at taking off and landing.”

“The [InstantEye] system handles a lot of the preventative measures,” Mocerino said, “but the operator has to be trained and really proficient with the system to avoid and loss or damage.”

On Salt Spring Island in British Columbia, Deputy Chief Arjuna George said his department has worked with drones but it has not purchased any for regular use. A concern, George said, is dedicating a volunteer firefighter to operating the drone.

“The biggest thing I see is having somebody who is able and qualified to use them, that’s going to be the tricky part,” he said.

George said he might consider delegating UAV use to non-firefighters from the community with an eager interest or previous knowledge of drones – similar to his department’s use of field incident technicians (FITs), civilians with training in radio communication, as command aides.

While Salt Spring Island Fire Rescue does not have immediate plans to acquire a drone, George said he expects the department will eventually do so. He compared the evolution of interest in drones to that of the thermal imaging camera.

“Like the TIC, when it first came out only certain departments had one; now it’s almost mainstream, standard equipment.”

In Ontario’s Wellington County, Fire Chief Brad Patton is hoping to have a drone by July and is working with DJI to make it happen.

“Situational awareness is huge now in the fire service,” Patton said. “It just makes sense to have that eye in the sky.”

Chief Rob Evans in Redwood Meadows, Alta., said his department originally purchased a drone to survey the nearby Elbow River during high water and flooding.

“Since purchasing,” he said, “we have come to the realization that the uses for the drone are as endless as the imagination. Scene size-up, investigation photography, training videos, searches, hazmat incident size-up and on and on.”

After having a drone in service for more than a year in Burlington, Hammond agrees that UAVs are simply an added piece of fire-service equipment.

“It depends on the call and it depends on the time of day,” he said. “If we have the opportunity to fly it, it is up there. It’s another tool that’s accessible to both the firefighters and senior officers running the scene.”