Editor’s pick 2016: Take me to your leader line

The company officer knows that a charged, large-diameter supply hose snaking up the street will likely block access to the next-arriving companies, so she ranked that hydrant second. As the engine approaches the second-ranked hydrant, the officer shouts to the emergency-vehicle operator: “You’re going to hit the hydrant up there, past the address. Stop in front of the house, we’ll drop our leader line and two attack bundles. Reverse lay the leader line to the hydrant. Send water as soon as you get it, don’t wait for us to call for it!” The operator nods and sails past the first-encountered hydrant.

As soon as the air brakes are set in front of the burning house, the company officer and her two firefighters disembark the engine, retrieve their assigned hand tools and both ladders and drop them all in the front yard. The officer heads to the rear hose bed and pulls the leader-line bundle down to the street, while each firefighter shoulders and disconnects the top two sections of both of the engine’s mid-mount minuteman, crosslay hose loads. Once the  firefighters are clear of the engine, the company offer kneels on the leader-line bundle and shouts for her driver to begin the reverse lay toward the hydrant.

The situation in this story occurs all too often, but based on my knowledge gained from instructing locally and internationally, the decisions made and the actions performed by the company officer are rare. Firefighters, as creatures of habit, think securing a water supply means laying our supply hose from the hydrant and driving the fire engine toward the fire – a forward lay. Leader-line reverse lays are taught in recruit academies, but are rarely put to use and seldom trained on (and only if the fire engine is equipped to perform them). I’ve even witnessed a well-equipped fire engine drive past the fire, perform no fewer than six three-point turns on a single-lane road, just to turn around and perform a forward lay from the hydrant to the fire. A reverse lay with a leader line would have sent water to the fire much faster.

A leader line is a dead load of 77-millimetre (three-inch) hose packed flat-load style in a hose bed from the female coupling. Typically, the hose in the bed will be no less than six lengths, and will terminate on top at the last male coupling with a water thief or other gated, reducing wye. A leader line’s function is to extend a larger diameter hoseline further than would be practical to stretch smaller lines, and then attach smaller attack lines to the appliance on the end. As much hose as needed is removed, and the line is then broken and attached to a side or rear discharge for supply.

We have devised a unique way of packing our leader lines that enable an effective reverse-lay operation, or simply extend our attack lines further from the truck than our pre-connected hoses will allow. The idea is to form a bundle of 77-mm hose that contains one length and a water thief. Our members use a 1.8-metre (six-foot) piece of old large-diameter supply hose to form the base of the bundle; we purchased some cheap utility straps and pass them through the width of the large-diameter hose at several spots to hold the bundled section of hose and the appliance. The purpose of the large-diameter hose base is to ensure the bundle stays packed together neatly and to enable an easier removal from the hose bed with less friction. We also attach a rope pull handle on the bed end to make retrieval easier.

Our district has a lot of properties with deep setbacks, so it is imperative that the water thief makes it well into the front yard, if not just short of the front door. Our practice of removing the top sections of our minuteman pre-connects gives us just 30 metres (100 feet) of working hose length and the nozzle – a water thief in the street is useless as the majority of our attack hose will be laying in the yard. The one-section leader-line bundle can be dropped and unstrapped in the street, and advanced one full length toward the structure; this helps to ensure that the firefighters will have almost all of the attack hose length at their disposal for use inside the structure.

Our version of the leader-line bundle works well for our department and has proven to be a versatile tool. Give it a try – it might be a fit for your department. Now get out there and practise with your leader lines!

Tim Llewellyn is a firefighter for the Allegheny County Airport Authority in Pittsburgh, Pa., and an instructor for a number of fire academies and training faculties. llewellyn.fire@gmail.com 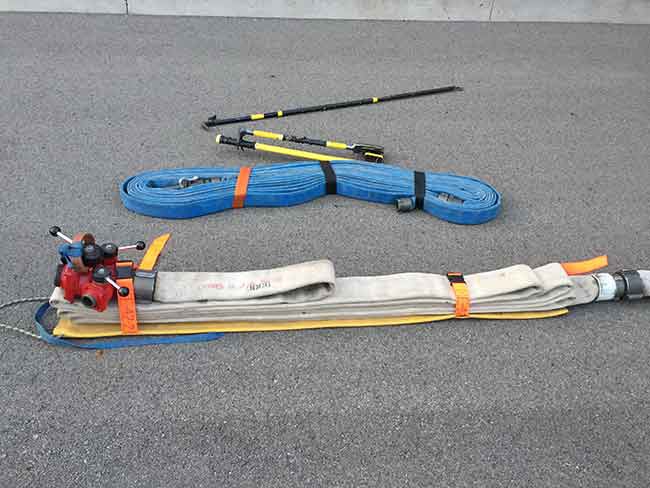