January 2016 - Sitting in a boardroom at Toronto Fire Services, Jim Sales recounts an anecdote offered by a member of the fire chief’s council on equity and diversity. 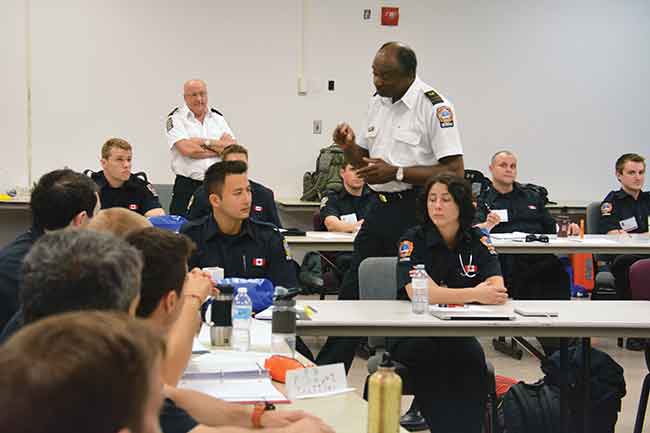 District Chief Ron Barrow speaks to the March 2015 recruitment class at the Toronto Fire Academy. Barrow’s mission is to set potential non-traditional firefighter candidates for success with TFS to better reflect the diverse community. Toronto Fire Services is using a career-access program to attract women and minorities to apply for operational firefighting positions. The program aims to improve customer service in the most multicultural city in the country. By Laura King

“People become firefighters because people they know are firefighters,” Sales said in an interview about workplace diversity and how to achieve it.

“When you have a largely white, male base of firefighters . . . it’s logical that more white males will know somebody who is a firefighter than anybody from a diverse community.

“So,” Sales said, “you need to find a way to get outside the box and go into other communities so that people think, ‘Oh, I could do that too.’ ”

That’s what Toronto Fire Services (TFS) hopes to accomplish through its career-access program for recruits.

As is the case for most career departments across the country, Toronto has struggled to find candidates other than white males who qualify for jobs as operational firefighters.

TFS employs plenty of women and minorities, some in suppression but mostly in fire prevention, dispatch and other support divisions, says Deputy Chief Debbie Higgins, whose portfolio included recruitment (it is now the responsibility of Deputy Chief Jim Jessop). The challenge, she said, is finding qualified firefighters from outside the traditional base of Caucasian males.

As Sales puts it, “We haven’t quite broken down that barrier in the operations division.”

TFS tried outreach programs and had partnered with a community college known for its multi-cultural student base to try to increase diversity. But that program’s 17 weeks of training with TFS was costly and failed to reach the target audience, so the city’s auditor general recommended a change. Toronto city council is adamant that the fire service, similar to the police force, better reflect the community it serves – the most diverse in Canada.

The biggest obstacles for non-traditional fire-service candidates is cost; so-called pre-service fire-training programs can run into the tens of thousands of dollars and there’s no guarantee even with a diploma that a graduate will be hired.

Indeed, many candidates discover only after completing pre-service programs that they are unable to pass the aptitude, interpersonal, physical or medical tests necessary to become career firefighters.

Toronto Fire Services needed a way to entice non-traditional firefighter candidates not only to apply for suppression jobs, but also to ensure a successful education-to-career path. Essentially, TFS had to reverse the longstanding process – find people to apply, make sure they are mentally and physically suited to the job, hire them (conditionally), then send them to school.

That took some doing. But it’s working. Albeit slowly.

With more than 3,000 personnel, TFS hires between 100 and 125 firefighters each year. To achieve the lofty diversity goal envisioned by council, TFS would have to replace a significant number of white, male firefighters with women and/or minorities; with just a handful of retirees each year and so few recruits, and with fewer women and minorities applying than white men, it is, admittedly, a long-term strategy, Sales acknowledged.

As of Jan. 1, Toronto had hired 36 candidates through the career access program, 11 of them women or minorities.

District Chief Ron Barrow heads recruitment for TFS. His message at countless sessions for potential career-access candidates across the Greater Toronto Area was simple but also inspirational: “We want you to succeed,” he said, repeatedly, to rooms full of young, eager candidates. “We are setting you up for a job with Toronto Fire Services.”

Career-access candidates must still meet strict requirements and pass stages 1 and 2 of the standardized candidate testing before being interviewed by TFS. The interview, Chief Sales emphasized at outreach sessions, is crucial; there are 18 attributes that TFS looks for in candidates during interviews.

“We’re looking for people who have a particular fit to work in customer service areas like fire,” Sales said. “We’re looking for the personal fit within Toronto, finding the individual we think will be successful in a highly urbanized environment, and a very busy environment, working 24-hour shifts. Are they going to be able to manage the stress?”

If, in the interview, a candidate demonstrates that he or she is indeed the right fit for TFS, a conditional job offer, or right-of-first-refusal letter, is issued – conditional on reference and criminal-record checks, submission of a driver’s abstract, and an assessment by a chief medical officer that includes a 12-lead EKG, a full physical, a second round of eyesight and hearing tests and a chest X-ray. Candidates must also complete stage 3 of CTS – the CPAT and firefighting skills.

Early on, there was a misconception that anyone accepted into the career-access stream would be hired by TFS. Higgins said that’s absolutely not the case.

“All it really does is get them their interview sooner,” Higgins said, “but they still have to pass that interview, the same as anybody would after doing the pre-service – they just do it at a different point. We don’t give offer letters to all the people who go through that system.”

Career-access candidates who pass CTS stages 1 and 2, are successful in the interview and meet the conditions of the job offer then have two years to complete a firefighter training program at a college or other centre and obtain a DZ licence.

Prospective firefighters who have passed all three CTS stages and have been to firefighting school can apply to Toronto the usual way – through its website (rather than the career-access stream). There’s no target number of women or minorities, Higgins notes, just a goal to generally diversify, particularly in suppression.

For some candidates, the career-access route reduces the stress of having to complete all CTS stages within a short timespan – for example, a particular
department’s brief application window. Others need extra time to train part-time while working in another field.

A Global News report in March 2015 noted that in 2013, just 3.6 per cent of Toronto’s firefighters were from racial minorities. But that makes sense, Chief Sales says, because so many on staff at TFS were hired years ago, when recruits generally came from the military.

Last March, when Global aired its report, TFS graduated its most diverse recruit class since amalgamation in 1998 – 39 firefighters, including eight women and six members of visible minorities. Two of the six women were hired through the career-access stream – the first two to complete the program.

“We’re trying to prepare people for success,” Sales says. “By breaking it down this way, each individual will have met all qualifications – in fact the new qualifications through CTS are the highest qualifications this province has seen . . . not only are we trying to create a workforce that mirrors our community, but a highly qualified and highly educated work force.”

While Toronto offers a translation service, it’s not immediate or available at incidents. According to the city’s website, its three million people speak 140 languages and dialects.

“Today when we look at a city like Toronto, with the diversity we have, it’s important to have a workforce that can relate to your community, that understands your community, and can be effective building relationships and networking within that community,” Sales said.

“The majority of calls, whether they’re medical calls or fire calls, require the ability to communicate with our audience, and so when you have a workforce that can speak multiple languages and can understand the people within the community, it gives us a tremendous opportunity to support them and serve them at a higher level.”