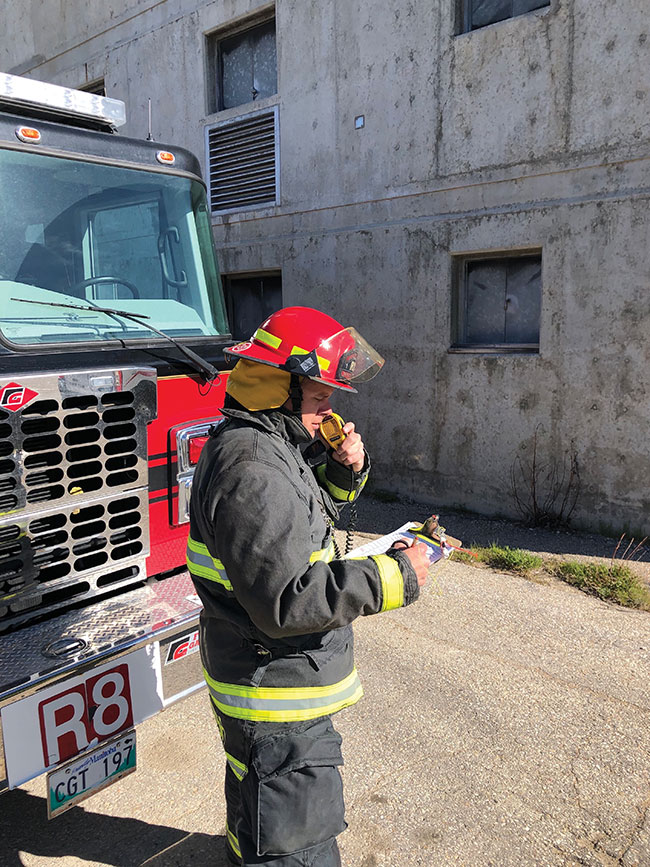 A company officer from the Winnipeg Fire Paramedic Service conducting command and accountability at a training exercise.

Did I get your attention? Good, because this is important.

In the modern fire service, everyone should have an accountability system and be using it. Yet, reports from the National Institute for Occupational Safety and Health (NIOSH) routinely indicate a lack of accountability in the top five causes of firefighter line-of-duty deaths (LODDs).

Does your system provide true accountability for your members?

The NFPA 1500 Standard on Fire Department Occupational Safety, Health and Wellness Program and the 1561 Standard on Emergency Services Incident Management System and Command Safety provide the basis on which departments must create, document and implement their accountability systems. But the system must be one that efficiently protects those operating in high-risk environments and not just one that ticks the boxes in the standards so you can say you have a compliant program.

Overall, incident resource tracking and accountability is one level of this and can be accomplished in a number of ways. These can include passports, tags, electronic systems, written tracking, or any combination of the above.

However, the crucial area for your firefighters is that of hot zone accountability. Merely tracking that someone is “present” on a scene is not enough.

Those tags I mentioned can be an important part of identifying the names of all those attending the scene, but this is merely a “roster” and is not accountability.

Does a tag on a board tell you where to send the rapid intervention team (RIT) to extricate a trapped member if you don’t take it a step further with tracking on a tactical worksheet?

At the other end of the spectrum is all the newest technology. These range from detailed boards and tablets to self-contained-breathing-apparatus-based systems and GPS tracking of all on-scene personnel. These are great tools to assist the incident commander (IC) and/or accountability officer, but they are just that – tools. What happens when this technology fails? Software glitches occur and power supplies fail and it still takes people to monitor and react to systems and warnings.

In his article, Angelo says that turning to technology to fix this problem is like handing out calculators to every kid when they enter grade school to solve math problems without ever teaching them how to solve the problems in their head.

So what do you do?

Accountability is a process that must be rooted in those tactical assignments and actively updated throughout the incident as those assignments evolve or crews change location.

That means that the IC or the operations chief, whomever is developing and implementing the incident action plan, owns the accountability as well.

This means a written tactical or command worksheet that manages not only your priorities, strategies and tactics, but your tasking, crew assignments, number and location as well.

If that is your answer, I will respectfully call bull.

If you have not heard the radio traffic or been present for a mayday call, let me paint the picture. Panic, confusion and chaos will reign no matter how well you prepare. Only a functional program and well-trained, practiced incident commander can possibly hope to manage the scene while communicating with firefighters and deploying resources for rescue.

What if the only words your firefighter gets out over the radio are, “Mayday, collapse,” and nothing more? Will you instantly be able to identify who is working in the hot zone, where they are, and where to send the RIT? Not a chance without a written tracking of the tactics, crew assignments, number of personnel and location.

Some departments assign a later-arriving officer, chief officer or even a whole crew for personnel accountability.

I am senior academy officer in the training academy at the Winnipeg Fire Paramedic Service. Time and time again in our officer training programs we initiate maydays during command simulations and scenarios when the student is found to not be keeping up on their accountability. The result is panic and chaos, resulting in significant delays in rescue or no rescue at all.

Remember NFPA 1561? It states that, “The incident commander shall initiate an accountability system that includes functional and geographic assignments at the beginning … is very important for the first on-scene supervisor to initiate an accountability system … .” And, NFPA 1500 says, “The incident commander shall maintain an awareness of the location and function of all companies or crews at the scene of the incident.”

That’s not simply a tag on a board or an electronic tracking system. They can be part of the system, but are useless without the accompanying written tasking and tracking of your personnel, what they are doing, who and how many they are, and where they are.

And what about the part that says it must be initiated “at the beginning of operations … by the first on-scene supervisor?”

Some departments assign a later-arriving officer, chief officer or even a whole crew for personnel accountability. How easy will it be for this individual to catch up with the resource assignments, tactical deployment and management of all incoming crews?

Accountability must start at the beginning and that means with the first-arriving officer or member assuming command. This is the individual doing the size-up and risk assessment, identifying problems and priorities, establishing strategies and tactics and initially deploying personnel to accomplish those tasks. Are not these members’ lives as important as those coming later?

Maydays don’t just occur after the accountability officer and the RIT are in place. In fact, according to Don Abbot’s Project Mayday, a study of mayday responses, incidents and prevention, the first unit on-scene is involved in a mayday 57 per cent of the time.

Our service has gone through many years of innovation and experimentation with regards to accountability. We had the tags, then the passports and even electronic tracking, but these were all difficult to manage and even harder to enforce.

I was “that guy” with the nice board and tons of tags or Velcro patches in tow with no idea of who was actually where or doing what. The only thing I could have done was report the names of those missing after the event. A roster of the deceased is not accountability.

Okay, I’m getting tired of standing on my soap box so here’s the wrap-up.

If you are tracking who is on your scene, great. If you are using technology to assist your program, even better. If that is attached to a good, tactical worksheet, awesome. But remember that the only true hot zone accountability lies with those doing the tasking and continually updating the what, who and where of their fire ground.

If nothing else, let this rant be a prompt to look at your program, assess it and ensure you actually have an accountability system to help keep your people safe, not just identify them after the fact.