How to remove gear of downed firefighters 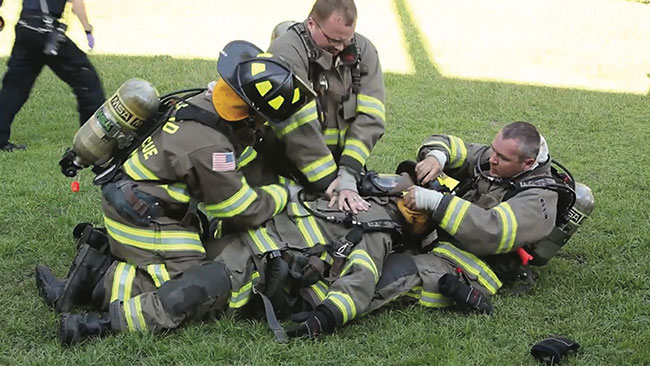 The potential of a sudden cardiac arrest of a firefighter in full turnout gear with SCBA is not only likely, but probable. Photo credit: Arjuna George

What we are about to share with you is a novel technique to efficiently doff turnout gear and a self-contained breathing apparatus (SCBA) from an unresponsive firefighter. Take a few minutes to learn this simple system, and share it with your fire department. It could save your life.

This causes an access issue, delaying the initiation of effective resuscitation until he or she can be extricated from their gear. We describe a novel technique to efficiently doff turnout gear from an unresponsive firefighter which allows rapid administration of chest compressions and minimizes no-flow time.

Approximately 100 firefighters die in the line of duty each year in North America. The most common cause of firefighter fatalities is sudden cardiac arrest, of which half are due to cardiovascular disease.

While training to remove downed firefighters from hazardous situations is common, there is no structured training available to direct care once they have been brought to awaiting medical personnel. Furthermore, undirected attempts at removing firefighters from their turnout gear is difficult and time-consuming, owing to its unfamiliarity among medical personnel, overall bulk, and the large SCBA bottle.

In this article, we discuss the etiology of firefighter fatalities, physiological effects of fire fighting, and a novel approach to doffing gear from an unresponsive firefighter. Our approach is simple, requires no additional equipment, and can be performed in less than one minute.

Firefighters perform strenuous work in heavy gear while being subjected to extreme environments. The cardiovascular workload encountered is not unlike running a marathon, except in situations where the ambient temperature may exceed 160 degrees Celsius. This cardiovascular and thermal strain experienced during firefighting alters myocardial function and blood chemistry, placing firefighters at roughly 10 to 100 times the risk of sudden cardiac arrest.

The potential of a sudden cardiac arrest of a firefighter in full turnout gear with an SCBA is not only likely, but probable. It is well-established that good neurological outcomes are obtainable in out-of-hospital cardiac arrest provided that a bundle of care, including high-quality chest compressions, is initiated early. However, the resuscitation of a downed firefighter presents a special concern because the patient may present to medical providers still in his or her full protective turnout gear and SCBA. Proper treatment is therefore delayed until the protective gear is removed.

Undirected attempts at removal of turnout gear is time-consuming and chaotic. Most medical providers that are not cross-trained in fire suppression will have little experience in the cumbersome turnout gear used by fire departments. Even among fire departments, training for the removal of gear is not common, and therefore we have developed a clear and easy approach to reduce no-flow time during the doffing of gear.

Technique
The Firefighter Down: CPR (FD-CPR) technique is broken down into 10 general steps, focusing on the stabilization of the downed firefighter in full personal protective equipment (PPE), or turnout gear, on their back. After removing the downed firefighter from any hazards, the initial rescuer grasps the shoulder straps of the victim and sits down, dragging the victim along their SCBA in-between the rescuer’s legs. Next, a second rescuer removes any obstructions from the chest, opens the top of the turnout coat, and begins chest compressions. Because the victim is resting flat on his or her rigid SCBA back plate, chest compressions can be performed.

When the victim’s shoulder blades are flat on the ground it allows for effective chest compressions. Photo credit: Arjuna George

From start to finish, the steps of FD-CPR should take no longer than 15 to 30 seconds, and in practice can be done in less time. Once the victim is extricated from his or her gear, EMS personnel can join in beginning a comprehensive resuscitation bundle. It is the opinion of the authors that pulse checks and the application of an AED or manual defibrillator be delayed until this stage, as during prior steps they may interfere with chest compressions and removal of turnout gear.

We have found through experience and feedback from numerous firefighters that a number of limitations have been identified with this technique. While there is a standard for PPE among firefighters, no two brands of turnout gear or SCBA are the same. During the pull-down step, certain gear may become hung-up on the victim’s wrists due to elastic bands or wristlets. In many cases the victim may only become partially free, which is not optimal, but if his or her shoulder blades are flat on the ground this still allows effective chest compressions.

Other gear has metal clips on the chest in addition to, or instead of, Velcro and zippers. These metal clips may be quite hot if a firefighter is removed from a working structure fire, requiring heavy gloves to touch them. Manual dexterity is greatly reduced while wearing structural firefighting gloves, complicating the removal of the turnout coat, which will likely be compounded by the loss of fine motor control during the psychological stress of rescuing a fellow firefighter.

Because of the variety of gear in use today, FD-CPR can not be an out-of-the-box solution for all fire departments. However, after careful training with their specific equipment, the general process can be adapted for any department’s gear.

We present a novel technique to doff gear from unresponsive firefighters which has not been previously described. This FD-CPR technique focuses on rapidly stabilizing the firefighter on his or her back to enable chest compressions while other rescuers focus on removing the gear. FD-CPR is simple, requires no additional equipment, and can be executed quickly ensuring that chest compressions are initiated early with minimal no-flow times, essential goals for the resuscitation of a firefighter in cardiac arrest.

Don’t wait for a brother or sister to need your help. Practice these simple 10 steps between alarms so you are ready to save one of our own. More in-depth information on FD-CPR can be found at www.fd-cpr.com.

Arjuna George is chief of Salt Spring Island Fire Rescue in B.C. He has served on the department since 1997. Contact Arjuna at
ageorge@saltspringfire.com.