Back to Basics: Desensitizing firefighters 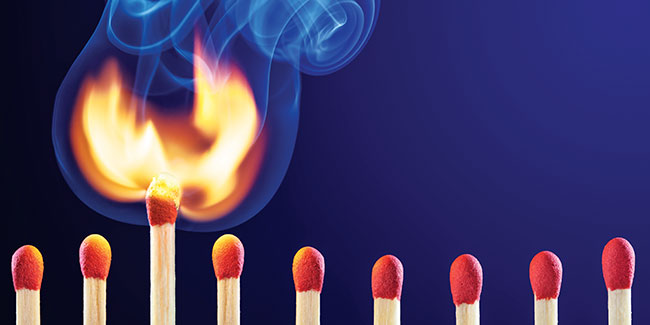 As we begin a new year, we’re going to begin a new series of articles focusing on the topic of desensitizing firefighters. This has been the topic of many lectures I’ve delivered, and the focus of this topic is to explore the different contributing factors and the common items that a firefighter becomes numb or desensitized to over the course of their career.

So, what is ‘desensitized’ in terms of our study? This is where the repeated actions of a firefighter occur without any consequences. These are consistent actions that are done all the time, which then become a bad habit for that individual, and it does so because they have not experienced any bad outcomes while doing them. After a period of time, their particular actions become the “norm” for them.

Doing the right thing alleviates any dominoes that may be starting to line up on the fire ground.

These “norms”, or bad habits as I like to refer to them as, are a detriment to the individuals that are working alongside that particular firefighter—not to mention the firefighter themselves. When we remind ourselves of the three fire ground priorities, life safety is at the top of the list; this includes firefighters as well, not just the public or person who called for help. Bad habits can add stressors to the life safety priority, which must be maintained by the incident commander.

The firefighter’s actions or bad habits can also affect the public or persons they are trying to help. Remember, all actions have a reaction or consequence.

Having a lack of calls to respond to breeds complacency. Because of the lack of calls, it leads to the absence of practice time and opportunities to perform the actions that need to be repeated in order to create good habits.

When we think about bad habits, they effect the firefighters working on the fire ground and add stressors to the life safety priority.
Photo credit: Mark van Der Feyst

Another factor of complacency is within the fire department itself. The culture of a desensitized department is that of a laissez-faire approach, ignoring or turning a blind eye to the actions of complacent firefighters. This may be from the company officer, the chief officers and even the fire chief themselves. The breeding of a bad culture within will only expedite the desensitizing of the entire department.

Not being situationally aware is yet another factor leading to becoming desensitized. Not being aware of your surroundings, in terms of what is going on or what you are doing, is dangerous. Seeing or listening to what is going on is crucial for the fire ground and our size up. Sounds are clues and they are telling us something, but only if we are listening to them.

Having a bad attitude in the fire service is ultimately going to lead into becoming desensitized or numb. The effective domain of the firefighter’s learning ability is severely handicapped by the obstructive bad attitude. This blocker will prevent any change in the actions that need to take place in the firefighter who practices like this. Their attitude completely blinds them from seeing the impact they are having on the organization, the training ground, the fire ground, and the culture of the whole department.

Bad habits can add stressors to the life safety priority.

The purpose of training is to practice skill sets to form good habits. When this is done on a regular basis, it tends to produce good results overall. It removes and reduces the dominoes that may line up on the fire ground. It also fosters a culture that promotes good habits and makes every firefighter responsible for their actions. There is accountability being enforced from every direction, from the top and from the bottom.

Becoming a desensitized firefighter is not the goal that is set out by each person when they become a firefighter, but they may fall into this category based upon the reasons listed above. The question is – are you one these firefighters?

Mark van der Feyst has been in the fire service since 1999 and is currently a firefighter with the FGFD. Mark is an international instructor teaching in Canada, the United States, FDIC and India. He is the lead Author of Fire Engineering’s Residential Fire Rescue & Tactical Firefighter books. He can be contacted at Mark@FireStarTraining.com.